For some people, home is a safe haven. A place we come back to to relax and Netflix and chill. It would be annoying if somebody suddenly built an LRT or a mall there, and then suddenly traffic goes up, sound pollution, ughh why. That’s exactly what the whole of KL is facing, according to the Save Kuala Lumpur Coalition (SKL).

Now what does that mean? Basically, the capital is Super Saiyaning too darn fast… one day there are new luxury condos coming up, next day a new mall, etc. More and more, quiet residential places and lush green spaces are shrinking. And KL-ites are freaking out! Realising that something needs to be done, they went to DBKL on 22 Feb to discuss gazetting a law to bring uncontrolled development into, well, control.

Cilisos and other media flers met up with the folks at SKL to find out how… But first, this is the amazing story of how 30 over Resident Associations banded together to form the Coalition.

Actually it was DBKL that gathered all the KL residents to begin with?! Why?

Yes guys, the SKL is made up of MORE THAN 30 Resident Associations (RAs)! Which BTW includes TTDI RA, represented by its Chairman Hafiz Abu Bakar, whom CILISOS had spoken to for the TTDI article. What da heck happened to make so many KL RAs mobilise into one unit? We spoke to Datuk M. Ali, the Deputy Chairman of SKL who recalls how it began in May 2008. *flashback*

At the time, DBKL had the idea to draft out a proper Local Plan for the city and gazette it. The thing is, the city has never ever had an official plan like that to manage development SINCE INDEPENDENCE, so it’s pretty long overdue. To do that, DBKL needed to get the residents’ say as well, because according to the law (Federal Territories Planning Act) the public can give opinions and raise objections.

So DBKL came up with a draft called the Kuala Lumpur City Plan 2020 (DKLCP 2020). Naturally, all the residents were psyched to be a part of it, when DBKL announced it was finally happening in 2008, yayyy! And that’s how SKL was formed! They made Tan Sri Abdul Aziz Abdul Rahman (who is President of the Bukit Damansara House Owners Association) Chairman of the coalition. He’s been their leader and key person ever since! 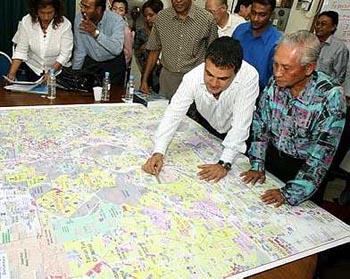 Then the Plan consultants began engaging with the RAs and residents through Focus Discussion Groups (or FDGs). Everyone worked together and it was great!

Things appeared to be going smoothly and then… roadblock. After the hearing-and-objection period had passed, the RAs were verbally informed that the consultants have wrapped up the Plan as per the scope assigned to them and the rest was left to DBKL, kthnx bye. After all the show of giving the rakyat a voice, the residents weren’t even allowed to see the final version of the Plan.

At every opportunity, SKL bugged DBKL to gazette the Plan, however they were repeatedly told like, yeah yeah it would be done soon. It went on this way until the last quarter of 2017, when they got the bombshell that the FT Minister has decided NOT TO GAZETTE the DKLCP 2020. And nobody told them, they found out by reading it in the news!

“Several RAs kept hounding DBKL to have the local plan gazetted, but they verbally informed the RAs that they could not override the FT Minister. We understand approximately more than RM30 mil had been spent [on it]. Who is accountable for spending over RM30 mil and yet the plan has not been gazetted?” – Datuk Ali It is not reported how DBKL spent the RM30 mil. Several KL MPs also took the residents’ side, saying it is waste of taxpayers money to have spent that much, but then end up not gazetting the Plan.

How does SKL plan on changing DBKL’s mind? Maybe fight them in court Currently, DBKL has a big blue book it refers to for urban planning called the Kuala Lumpur Structure Plan 2020, but in SKL Chairman’s words, they more like “guidelines” than actual rules. Having a book alone is not solid enough… even if it is hardbound. You see, if it is not gazetted, it does not become law, so people don’t have to abide by it if they don’t want to.

Means there is no official rule to protect residential zones from commercialisation, nothing to stop people from indiscriminately overdeveloping KL until all the green spaces are gone. 🙁 For example, the luxury condos that were approved to be built in Taman Rimba Kiara, a public park. And here’s another example of why a big blue hardcover book is insufficient – in Nov last year, the Cabinet banned DBKL from approving 4 types of developments (malls, offices, service apartments and luxury high-rise apartments priced over RM1 mil). Then on the same day, there appeared to be U-turn when the Works Minister said the ban was not a blanket stop-order and approval would continue to be given on a case-by-case basis.

On their part, KL Mayor Amin Nordin defended that they are not simply giving approval like free samples at the mall. He said all projects go through DBKL’s planning committee and that they do engage various organisations:

“If the group thinks that the city is overdeveloped, we have been having meetings with the Special Task Force to Facilitate Business (Pemudah) every 2 months.We will discuss the developments in KL and compare them with other cities in Asia such as Bangkok and Jakarta.” – Amin Nordin, KL Mayor, Propertyguru.com.my TTDI residents trying to save their park. Img from The Malaysian Insight

With DBKL and the FT Ministry not taking any concrete steps to gazette the Plan, SKL went right to their doorstep… literally, they went to Menara DBKL on 22 Feb, to submit their request and demands in writing. After the meeting, SKL spoke to reporters at the lobby at 10.30am stating that the authorities have taken note of the residents’ concerns. We dunno what that means but that’s all they could give at this point.

“This morning, we asked DBKL to approve and gazette the Local Plan so that KL residents have a guide to refer to. Unless you have a Plan, there’s no hope of us becoming a world-class city. We might take court action, if they ignore us, but I hope we don’t have to come to that.” – Tan Sri Abdul Aziz, SKL Chairman told reporters

In the meantime, SKL is arranging a meeting with all RA members in 2 weeks to discuss their next course of action. Blue book or not, the Coalition would prefer if DBKL could just gazette DKLCP 2020 first.

“The plan can be gazetted and amendments can be done later if required. There are processes for that. Working without a plan is like planning to fail.” – Derek Fernandez, expert in town planning and local government, Propertyguru.com.my

What can people do to help? SKL members talk to a UN Human Settlements Programme representative during a peaceful protest. Img from The Malaysian Insight

In terms of urban planning, KL is not as bad as, say, Jakarta (yet). But what makes great urban planning? Some would say, environmentally sustainable, people-focused design, and realistic long-term plans for how spaces will be used.

However in the current situation, DBKL hasn’t really shown that they prioritise green spaces which are absolutely critical in managing floods. Sure we have some parks like the Perdana Botanical Garden, KL Forest Eco Park, KLCC Park and more. But look at what’s happening to Taman Rimba Kiara and Bandar Tun Razak. No wonder KL city is often flooded.

And if you wanna say, good what, they’re building more homes for people… what people tho? The Robert Kuok and Ananda Krishnan category maybe. Those luxury condos they keep building are totally unaffordable and does not reflect the need of KL residents. :'( There is a gross mismatch between supply and demand, Bank Negara stated. SKL needs the help of more KL-ites to stand together with the Coalition to show DBKL that they won’t back down. When we asked Datuk Ali how people could help if they wanted to, he said that anyone could join them if they want to see DBKL install real laws to protect the KL landscape.

“SKL is coordinating all concerned and committed RAs, NGOs and individual citizens to come forward to demand for our rights.” – Datuk Ali

An issue like this affects EVERYONE, both KL-ites and Malaysians, Datuk Ali believes. KL is the national capital and the financial center, it’s the face of our country. If we don’t take an interest in who will?