Malaysia is reaching 2020, we’re undergoing a lot of transformation butttt the number of kidney patients is still on the rise. However, we’re not gonna be focusing on that today because there’s a more alarming issue involving existing kidney patients, particularly those receiving their treatments from a dialysis centre in Seremban. Uh-oh!

Recently, a medical and haemodialysis centre in Seremban got deregistered by the Ministry of Health (MOH). The centre was then asked to vacate its building WITHOUT removing anything, including medical equipment, from the premise. Woah, hold up. What is this centre and how on earth did it get deregistered in the first place? Before we go deeper into that issue, let’s just look at what this centre is.

The centre is said to be one of the largest non-profit private dialysis centre in Malaysia!

Mawar Haemodialysis Centre (MHC) was founded by the late YB Dato’ Dr.Yeow Chai Thiam, who was also the former Negri Sembilan MCA chief. The purpose of this centre is to improve the health and quality of life of people living with kidney disease especially low-income earners. It is also said to be the largest charity private haemodialysis centre in Malaysia. But how does haemodialysis differ from any other type of dialysis anyway?

If you’ve read our previous article on how to prevent kidney disease, you may find out that there are two types of dialysis: haemodialysis and peritoneal dialysis. For this article, we’ll only explain what haemodialysis is since it is related to this story. Haemodialysis uses a machine and filter that functions similarly to your kidney by removing waste and water from your blood. A patient’s artery is hooked to a tube and the patient’s blood is drawn into a filtering machine to clean it. The blood will then be sent back into the patient’s body and this process is repeated 3 times a week for a moderate healthy person.

We actually got in touch with a kidney patient, who has been getting his treatment from MHC in Serian, Sarawak for three years, named Mohammad Shahril Shali who shared with us what happens if kidney patients skip their dialysis session.

“If we don’t undergo dialysis for three days, we will experience really bad fatigue and pain throughout our body besides having difficulty in breathing that affects our sleep.” – Mohammad Shahril told CILISOS, translated from BM.

Btw, if you can’t imagine how haemodialysis is, here’s a pic to help you with that… or you can read more about both types of dialysis here. The difference between haemodialysis and peritoneal dialysis. Img from United Dialysis Center

MHC reportedly has 14 branches nationwide that treat almost 800 kidney disease patients, Mohammad Shahril being one of them la. And each branch reportedly has an average of 12 machines. However, that may not seem enough to cater to the needs of its patients especially with the number of kidney disease patients is reportedly increasing. It is also said that since the percentage of kidney patients who undergo kidney transplant in Malaysia is low, 99% of them may have to rely on dialysis.

In fact, the number of patients applying for treatment under MHC increased. In its website, MHC stated that dialysis costs the organisation RM20,000 yearly to support a single patient only! However, each patient may only have to pay RM60 per session while the govt subsidises RM50 per patient. This is actually considered the lowest price among other dialysis centres.

But the govt isn’t the only one trying to help these patients. The public is also welcomed to donate to MHC to support the cost of dialysis for its patients.

“We need more than RM70 million to support our patients for the next 10 years.” – MHC stated in its website.

And just like other NGOs which use their surplus to run the organisations, MHC is partly financed by the revenue from its private wing called the Mawar Medical Centre (MMC). However, even with the donations received, govt grants and revenue generated, several issues arose. And it all started with its private wing when…

… all of the medical centre’s staff ciao except for one  😮

The issue began when doctors at MMC reportedly claimed that they had not been paid their dues amounting to RM5.8 million! Aiyo! This reportedly violates the Private Healthcare Facilities and Services Act 1998 (Act 586).

So, what did these doctors do? Nahh, they didn’t bring their banners to demonstrate against MMC or submit a petition requesting the organisation to pay them. They opted for something even drastic. All staff of MMC reportedly resigned on Nov 1 2018… except for one specialist! And this happened within 24 hours. Dun dun DUNNN!

Because of this, MOH has requested MMC to cease its operation and revoked its licence after it failed to sort out its issues. Said no doctor ever to Mawar Medical Centre.

Although MOH revoked MMC’s licence, it was reported that haemodialysis treatments in other centres were still allowed to operate as usual. But this didn’t really last.

Remember when we mentioned that MHC was partly financed by MMC? Since MOH revoked MMC’s licence, MMC wasn’t generating revenue to finance MHC, hence, affecting MHC’s financial support. And this is because the overall cost needed to run all its dialysis centres and pay their workers is reportedly RM4.5 million per month! That’s RM54 million annually! *gasps*

Consequently, this has caused the layoffs of about 500 MMC and MHC employees. But that’s not all.

“…Now we will be forced to shut the dialysis centre as well as lay off our workers as we do not have the money to pay them their salaries for February.” – MHC chairman, Datin Chua Lay Ping told The Star.

Woah, shutting down MHC’s centres and putting almost 800 patients’ lives in jeopardy?? Well, yea. Mohammad Shahril told us that the MHC branch in Serian, Sarawak is facing the same problem. In his Facebook post, he pleaded for the authority to take action to resolve the issue on the closure of MHC Serian and other centres nationwide that supposedly took place on the 14th of February. Mohammad Shahril had also included a photo of the notice from MHC’s management in his post which looks like this: 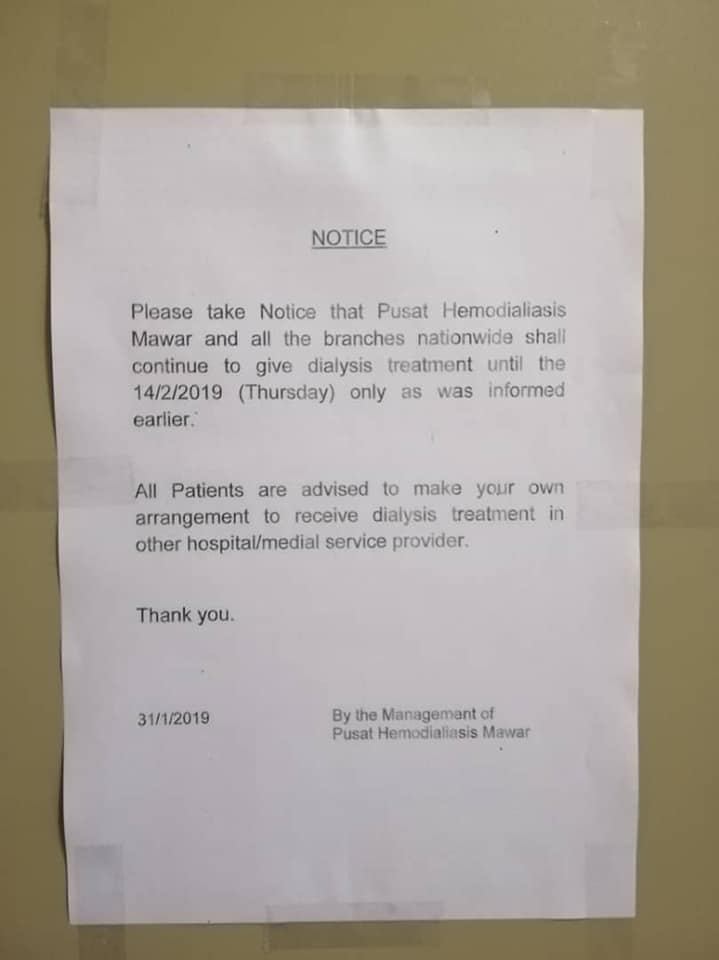 Although the notice stated that the centre will be closing after 14th February, Mohammad Shahril told us that, at the time of interviewing, the centre in Serian is still operating as usual until the end of February. However, he added that the centre may close if patients can’t afford to pay for their treatment. Uih, didn’t we mention that the payment is subsidised by the govt?

“SOCSO has been covering the cost of my treatment all this while. The management wants (to implement) the ‘pay and claim’ method of payment but there’s no black and white about that method yet. Patients find it hard to fork out their own money although they have the invalidity pension.” – Mohammad Shahril shared.

And we’re not talking about forking out RM60 per session anymore because the new cost of the treatment is allegedly RM250 per session! Imagine having to fork out RM3,000 to pay for 12 sessions in a month. That’s three times the minimum salary wei!

But shutting down MHC’s centre is just one thing. Although MMC and MHC are private institutions…

No, especially not the socks! Gif from Gfycat

At the time of writing, MOH has sealed the premises of both MHC and MMC in Seremban after the management announced that it would cease its operation on February 14th. But that’s not the only reason why the ministry sealed the premise.

Apparently, the land where the centres are located belongs to the Federal Land Commissioner. It was leased to the management for a 30-year period.

However, the management of both MMC and MHC has breached certain conditions of the 30-year lease. So, the Federal Land Commissioner gave the management a month to explain why it breached the condition but it had failed to come up with an explanation. MOH sealed the whole place ady. Img from The Star

And thanks to that, MOH sealed the whole place and the management was requested to leave the premise without removing anything from the building. That may have something to do with a govt grant amounting to some RM20 million which was reportedly given to the management over the years.

“The buildings and medical equipment are not private property because they were acquired through public funds and government grants.” – S. Veerapan told The Star.

But in the meantime, what will happen to the 274 patients who have been receiving their dialysis treatment at these centres in Seremban? Don’t worry, gais…

The management of these centres was supposed to find an alternative for their patients when the centres ceased their operations. However, the govt had to make those arrangements since the management reportedly failed to do so.

Inside Mawar Haemodialysis Centre. Img from The Star

Oh, speaking of which, the MHC management actually has been doing anything and everything it can to solve the problem ever since the problem first started. One of the efforts was reportedly by forming a subcommittee consisting of 11 NGOs to get its licence to operate back.

“The subcommittee will play a role in helping us get our operating licence back. The dialogue held today was meant to reach a consensus on handing over assets and liabilities to the Federal and State governments for assistance.” – Datin Chua Lay Ping for The Sun Daily.

Aside from that, the management has submitted an application for a new licence but this has yet to be approved. Although there were initial plans for the state govt to take over the management of these centres, that plan didn’t happen because it was reported that the centres will be taken over by a third party.

At the time of writing, there is no mention of who or which party will be taking over the management of MHC centres. But Dr Dzulkefly mentioned that MHC can transfer the licence to operate its 13 other branches to any non-profit body separately. This is to ensure that the financial aid and subsidies benefited by haemodialysis patients would not be affected.

Regardless of who’s taking over the management, the patients only hope is for their dialysis treatments to proceed as usual.

“I only hope that the dialysis (treatment) will proceed as usual. (I hope for) Nothing more than that because we really rely on the dialysis machine.” – Mohammad Shahril told us.

Share this article:
NAH, BACA:
What happens when you give up sugar during CNY #40D40NGeramGula