Here’s a trivia question for you: What’s the longest registered person’s name in Malaysia? 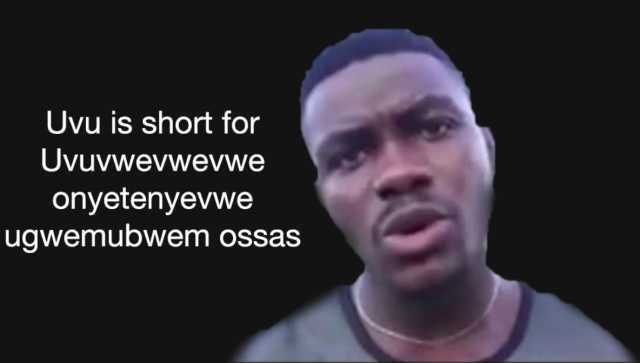 If you answered “Nur Fathaniah Tariyah Karimah Farwizah Zahabiyah Syahirah Binti Airol Anizam“, close but not quite. According to a Sinar Harian report in 2014, that name belongs to a Standard 6 student, and it contains ten words and a whopping 76 characters. That record was recently broken by someone called “Princess Aura Nurr Ermily Amara Auliya Bidadari Nawal El Zendra binti Mohd Suffian“, made of 13 words and 82 characters. These are extreme cases, but their names won’t look out of place in today’s school attendance sheets. Try being a teacher and memorizing all this. Img from Cari Infonet.

For the Malay community (at least), the naming of babies seem to follow a trend, and this trend of naming a child with at least three names (not including the father’s name) seemed to have started in the 2000s, with the names inspired from celebrities and pop culture. Although some parents are reverting back to single or double word names within the past years, recently… If your name can’t fit on your MyKad, you’ll get issued an extra card like this. Img from Sinar Harian.

Few months ago, Jasri Kasim, a National Registration Department (NRD) deputy director-general came out and said that parents are prohibited from going over the 80 character limit, as well as registering short forms of names, like ‘Abd’ for ‘Abdul’ and ‘Mohd’ for ‘Mohamad’. He had stated that the longest name in the NRD current records is made up of four words and 78 characters, although we couldn’t find out what that is.

Anyway, the statement didn’t go well with some people, one of them being a constitutional lawyer named Nizam Bashir. He had warned the NRD to not overstep its jurisdiction in registering new births, and said that the NRD has no right to dictate a person’s name or surname, although the law did say that the NRD can refuse to register a name if they think it’s ‘undesirable‘ or ‘objectionable‘.

So if you’re planning to name your child something that the NRD finds ‘objectionable’ or ‘undesirable’, there’s a chance that they will reject your application. But what counts as ‘undesirable‘ or ‘objectionable‘? Well…

There are 22 kinds of names under those categories A cheat sheet of this header. Img from The Star.

Sometime in the 2000s, the NRD noticed that more and more people are applying to change their names. So to prevent future parents from giving their children weird names, they consulted several religious bodies across the country (Muslim, Christian, Hindu, Buddhist, and Taoist) and came up with 22 categories of names that won’t fly with them, but broadly we can group them into five kinds of names. First up would be…

1. Naming your child something that they’re not You have to earn that ‘quiet girl’ title. Img from me.me.

Basically, you can’t put a title in front of your baby’s name. These range from government awarded titles (Tun, Tan Sri, Dato’ Patinggi, etc), ranks and positions (Kapten, Mufti, Ketua Menteri, Haji), professional titles (Professor, Ir, Dr, Diplomat), and perhaps the awesomest of them all, warrior-ish names (Mahaguru, Panglima, Pendekar). Interestingly, ‘Tun’ is one of the more popular names (4,276 applications as of 18th September), perhaps due to Tun Mahathir’s popularity. Guess junior has to work hard for that ‘Tun’, huh?

Special names that reflect ancestry or lineage, like Syed/Syarifah (said to be descendants of the Prophet Muhammad), Megat (descendants of Megat Terawis, the first Bendahara of Perak), and Wan (said to be short of ‘Pahlawan’, starting from a Perak noble), are also prohibited if the person applying is not part of the lineage. There was quite a bit of discontent about the way the NRD handled the intricacies of inherited titles some time back in Kelantan. Perhaps the most famous Nik. Img from Biswardi Hasbi.

There, most titles are inherited through the male line of the family, but if a bangsawan woman is to marry a commoner, the child cannot inherit the mother’s name, although they technically still carry the bangsawan blood. They will instead be given the surname ‘Nik‘. The NRD did not recognize that, so… yeah. Anyhoo, these names may cause people to look up to a person, but at the other end of the spectrum, some parents may give…

2. Names that get your lunch money stolen To be fair, people make fun of anything. Img from MASTER_HWC’s YouTube.

These include names with bad meanings in the Malay, Arabic, Chinese and Tamil language. For the Malay language, funny names are not allowed, like Kecut (shrivelled), Kerepot (old) and Pendek (short). Bad names like Buruk (hideous), Malang (unlucky) and Hapak (musty) are also not allowed. For obvious reasons, vulgar words (B*ntot, P*ndek and P*ntat, for example) also kenot.

Foreign bad names, like in Arabic, are a bit tricky because they can sometimes sound okay. Examples include Zaniyah (a ho), Wati (fornication) and Zakar (a dingaling, not to be confused with Zakaria). For Chinese and Indian names, the NRD consulted Malaysia’s Buddhist Missionary Society, the Malaysian Hindu Sangam as well as Universiti Malaya’s Tamil Language Association and added several names with bad meanings to the forbidden list, like so: 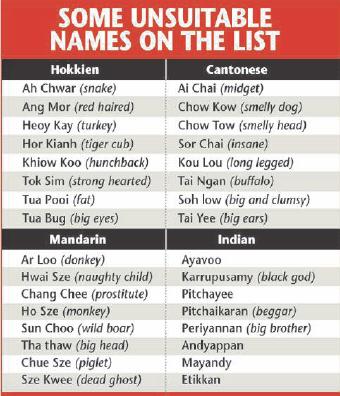 Besides names with bad meanings, parents are also discouraged from… The kampung people call him Bedul. Img from Sideshow.

We’ve already talked about the shortening of common names like ‘Mohammad’ and ‘Abdul’ (abbreviations), but in addition to that parents are also discouraged from registering initials in their kids’ names, like ‘T. M. Leopold’ or ‘M. Balakrishnan’. Which kinda makes sense, because how else will people know what that ‘M’ stands for? Maggi?

Aliases are not allowed (at least at birth lo), so no ‘Letchumy Karuppiah aka Rihanna’. Interestingly, numbers (as well as letters, like the initials ruling) are also not allowed, so say goodbye to your plans of naming your child ‘deathslayer445’, ‘007’ or even ‘WFD3242’, after your precious car. We’re not sure why the NRD had this rule in place, unless… someone actually tried to name their baby a bunch of numbers and letters before. Ahh, Malaysians.

Perhaps surprisingly, traditional names like Melati and Rose may belong under one of the undesirable names categories, i.e. names of fruits, veggies, plants or food. So no calling your child Watermelon, no matter how plump or sweet she may be. Animal or insect names are also forbidden, like Keldai, Wolf, or even… Somewhow, Pak Ramli just doesn’t have the same ring to it. Img from Zoommovie.

5. Names related to the domestic life… and fashion, maybe? We dunno if anybody out there is named after kitchen implements or objects in general, but names based on those like Senduk (ladle), Garfu (fork), Berus (brush), and Cawan (teacup) may not get registered at all. Perhaps people can get with that, but glamorous names based on jewels and clothes are not allowed either. So Ruby, Mutiara (pearl), Peridot, Kasut (shoes, don’t matter if they’re Manolo Blahniks) and Benang (thread) all kenot.

Who the heck gives their children all these names?

Trolldads, that’s who. Img from Gfycat.

Some of us might remember back in GE13 when the Election Commission (EC) came under heavy fire after people found the names of fruits and vegetables in the electoral roll. The names, allegedly made up by the EC, include Timun (cucumber), Kangkung, Betik bin Kobis (Papaya, son of Cabbage), and other… creative… names like Hairan binti Duakali (Puzzled, daughter of Two Times) and Ubat anak Nyamuk (Medicine, child of Mosquito).

However, according to former Penampang MP Philip Lasimbang, those names are hardly unusual in East Malaysia, particularly among the Kadazan communities.

“Most older Kadazan parents don’t speak English and Malay so their kids had names like Bugiad (always crying) and Gamato (big eyes). There was a person who ended up with ‘No Name’ as his name because his parents did not know how to fill in the birth certificate document. It’s also a norm for the Kadazan community to give their children nicknames which sometimes end up on the birth certificate.” – Philip Lasimbang, as reported by The Star.

Such names are usually terms of endearment rather than a malicious label, and those bearing weird names there had said that they were rarely bullied for their names. But what about the seemingly mean Chinese names like Ho Sze (monkey) and Chow Tow (smelly head)? Well, according to ancient customs, such names were given to ward off demons and evil spirits. Also, some believe that giving too great a name to a child may be too much of a burden for him or her to carry through life, and in such cases the child might grow weak and feeble and eventually die.

People’s names could have came form a fruit, an egg beater or a particularly smelly head, but perhaps their parents have valid reasons for naming them that. While these names are classified as objectionable or undesirable by the NRD, these are more like guidelines rather than an outright ruling.

“The decision to name a child lies fully on the parents or the birth informer. The name given by the parents is subjective and depends on the individual. Parents who want to name their child with undesirable or objectionable names will be advised by the NRD on its unsuitability before registration,” – NRD statement, translated from Projek MM.

But still, if you feel like your name is weird and you don’t want it anymore, you can always change it, according to Andy Low Hann Yong, a family law practitioner. To do so, all you have to do is submit a statutory declaration which certifies that you have “absolutely renounced and abandoned” your former name, and give a valid reason for it. You can find a more detailed procedure here.

Share this article:
NAH, BACA:
Is Muhyiddin's new party a rebranded UMNO? Or could it be a stroke of genius?