Disaster strikes the Malaysian events industry again and this time comes a new threat: Detentions of foreign visitors. On 21st June, American singer Maggie Lindemann was allegedly detained while performing at The Bee in Publika. Just last week, she tweeted about it:

Her “5 days confined in a living hell” was actually being detained for less than 24 hours on 21st June at 9.30pm and released at 7pm the next day and then staying in the country for a few days to settle her problem. Now you’d wonder what these foreign visitors did to get detained. If you have foreign friends who wanna perform in Malaysia, please tell them this…

Even if you’re a Singaporean who wants to sing in a hotel bar, you still need the professional visit pass and some approvals. We reached out to Rizal Kamal of ALIFE (Association of the Arts, Live Festivals and Events) to ask about the situation. He told us that the peeps were detained for not having professional visit passes a.k.a. Pas Lawatan Iktisas (PLIK), which the Immigration dept said falls under the Immigration Act 1963.

According to the Immigration dept’s website, professional visit passes are for foreigners who wanna do short-term work like filming, performance, volunteering and training in Malaysia. But that’s not the only thing they need to organise an event involving foreign artistes. Turns out that they also need approvals from the local police branch, local municipal council and PUSPAL (Filming and Performance of Foreign Artistes).

“These are the 4 key permits needed for any event with an international artiste. And of course payment of artiste withholding tax from the tax department.” – Rizal. 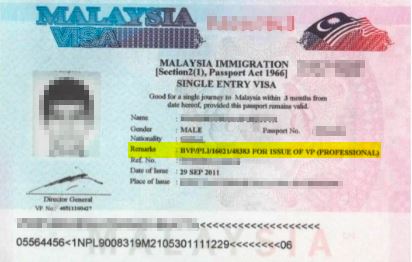 What a professional visit pass looks like. Image from May Wong.

Okay.. so a foreign performing artiste like Maggie needs these 4 things, but what about the cosplayers who came with social visit passes? Apparently, they’re also subject to the same rules! They’re not just playing dress-up meh?

“If they are just attending, they only need a social visitor pass.

If they are performing on stage as cosplayers, there needs to be a permit.” – Rizal.

This is in spite of the fact that cosplayers are not in any of these specific categories: A1 Singing, A2 Music, A3 Dance, A4 Concert, A5 Theatre, A6 Circus, A7 Acrobatic, A8 Martial arts, A9 Magic, A10 Comedy, A11 Promotion and A12 DJ. (Correct us if we’re wrong)

Even more shocking was that a famous singer like Maggie didn’t have what she needed. The reason was revealed in a Facebook post by the host venue The Bee, where it came forward to clarify that there were issues in applying for these documents, which could have led to her application not being processed in time as Rizal told us.

Usually, it takes at least 21 days to process an application, which is why promoters apply at least 2 months before the event so that they have more time to process and appeal if they must. In Maggie’s case, you’d think that the organisers would cancel her performance before its scheduled date if her application wasn’t processed in time. But Rizal said there’s too much at stake for a cancellation.

“It’s not as easy to postpone or cancel an event as there are a lot of parties involved  – artiste, management, talent agency, music agency and so forth. Popular artiste as well has a tight tour schedule. When a show is cancelled, organisers can lose a lot of money and their reputation. But artists being detained is much worse.” – Rizal.

NAH, BACA:
6 stories of Malaysian ancestors who are 100% badass

Malaysian Marathon KL, Devouror’s concert, Better Beer Festival, Above Ordinary Malaysia… These events are different yet they share one thing in common: They got cancelled. And they’re not alone as many other events have been cancelled over the years.

So, early last year, ALIFE organised Enough is Enough to voice out against the numerous cancellations which have been placing the 17,000-job-yielding Malaysian events industry (and consequently, the tourism industry) on a loose thread. Among those in the industry who get affected by this issue are the suppliers, who have become too scared to support a live event.

Every year, I go for the Djakarta Warehouse Project, and when some DJs ask “All the people from Malaysia raise your hands!!“, 30,000 hands go up with Malaysian flags and all.” – Andrew Netto told us last year. It was so bad because, for years, the events that have been pre-approved get denied at the last minute, hence defeating the purpose of PUSPAL’s approval process, which is why ALIFE has been calling for PUSPAL’s approval to be rock-solid so that the police and local councils won’t be able to ignore the approval and simply cancel an approved event.

“So either we disband PUSPAL, or we give them all the power. PUSPAL does have their advantages being at a national level. What we’re lobbying for is for PUSPAL to be binding.” – Rizal told us last year. A flowchart by ALIFE of a proposed event approval system

Fast forward to this year and we check in with Rizal about whether PUSPAL’s approval process has strengthened… It hasn’t. And the bad news for our tech-dependent globalised world is that none of the application steps are online (at least, not fully).

“Puspal’s process remains the same. ALIFE and other related NGOs have formally submitted multiple suggestions for improvements and they are working to improve… They need to make it simpler. It’s complicated and very difficult to do without a runner. We’re pushing them to have everything (the whole process) online.” – Rizal.

A quick check of the PUSPAL guidelines indicated that applications, cancellations, changes of foreign artistes or crews etc have to be done online AND by hand or post to the PUSPAL Secretariat. Imagine how hard that would be for those overseas. With that said, Rizal’s advice to those who wanna organise events, especially those involving foreign performers, in these tough times is:

“For now, we urge all promoters to understand laws and procedures of Malaysia with regards to international performers.” – Rizal.

Just to recap, you’d need 4 main things – professional visit passes, as well as approvals from PUSPAL, police and local municipal council. But if you’re an event organiser who wants to learn more about organising an event while complying with the rules, Rizal strongly suggests that you sign up with ALIFE.

“Be a member of ALIFE as well so we can educate and guide you not just in permit processes but in becoming the best event organisers.” – Rizal.