This article was originally written in April 2017, but has been updated to reflect recent developments.

In some saddening news over the week, a pair of divers and their divemaster died while they were diving near Pulau Kalaupan due to fish bombs in the area. This led to wide spread condemnation from environmental groups such as WWF Malaysia as well as Sabah Chief Minister and Semporna MP Shafie Apdal:

“Stiff action must be taken against those involved in the use of fish bombs. This issue is not new. As the Semporna MP, I had called for action to tackle the menace,” – Shafie Apdal, as quoted by FMT

So far, the latest update at time of writing is that two people have been arrested by authorities over the deaths. The police are however still on the hunt for more suspects, who are all believed to be sea gypsies.

As for this article tho, we’d be looking at the act of fish bombing itself. And to start…

So this sorta fishing is called fish bombing or dynamite/blast fishing. It’s the practice of using explosive compounds to stun or kill fishes so fishermen could catch them easily.

FYI the explosive isn’t some suicide bombing fish. The homemade bombs comprises of kerosene and fertilizer in a glass bottle. Just light the fuse and you get your KA-BOOM! What the fish bombs look like. Image from NatGeo

Here’s a simple equation on how the bombs work:

In this case, the kerosene acts as the fuel, and the nitrate from the fertilizer supplies the oxygen, the fuse is the igniter (heat), resulting in a blast of shock waves to K.O. the fishes. In fact, it’s so easy to make, we even wrote an article about homemade explosives before! For fish dynamites tho, the hardest part is usually the fuse, as only a few people know how to do it.

But basically, the blast from the bomb could immediately turn the fish into fish balls, or rupture their swim bladders (a gas-filled organ inside fishes with the ability to control their movement). While they’re dead or stunned, these fishermen then net-in their floating bodies or dive down to collect them. Sure this method yields a lot of fish, but kesian the fishes, the fishermen macam terrorists like that.

And on top of that, probably the worst part of this whole fish bomb thing is that it’s dirt cheap.

This activity could potentially clear out our oceans supply of fish For obvious reasons, it’s illegal, not to mention unethical. But come on lah, possession of explosive materials already illegal (under Explosive Act 1957), they still wanna blow up fish out of water? Poor things didn’t even get to put up a fight.

According to the Malaysia’s Fisheries Act 1985 (section 26), anyone using explosives/poisons/electrical apparatus for the purpose of killing/stunning/disabling fishes to catch, shall be gill-ty to an offense. There’re  even cases were people get injured or die, and they don’t even report it coz they’re afraid they’d be charged.

Current punishments for violating this rule has been quoted as “not strong enough“, with fines up to RM20,000 or a 2 years maximum jail sentence. Even when charged, they only have fishermen incomes, so it’s kinda hard to settle the fines. But it’s still cheating, like with infinite number of Master Balls in Pokemon. The laws aren’t just there to keep the people safe. The effects from this activity could potentially damage the whole ecosystem and cripple the businesses of local fishermen.

Data from the Tropical Research and Conservation Centre (TRACC) show that fish bombers yield four times more fish (!!) compared to regular fishing, get high temporary incomes, but greatly reduce their future catches. Not to mention increasing the price of fishes in the region like this, slowly dragging themselves towards poverty.

Other than that, it’ll permanently scar the ocean’s reef and corals. When the reef is damaged, it leaves craters on the ocean floor and will not support life for a period of time. And did you know corals only grow about 5cm – 25cm a year! It’ll take forever to repopulate the reef if the bombing continues.

This harms the tourism industry also because Malaysia is one of the top diving spots in the world, and a flat seabed of dead corals and fish ain’t pretty.

The scene of an underwater terror attack. Source

Fallen reefs also mean the fishermen have to spend more time and money on fuel to scavenge for new reefs to destroy. Don’t forget other marine life exists in these waters also, innocently bombed, while their bodies are left behind with a whole lot of damage. What if they accidentally wiped out an endangered species? Think of the turtles!

Ultimately, we’d also wanna know if the fish is safe enough to eat or not. Since the blasts only shatter internal organs, we assume the fishermen hand picked fish that are still intact. We couldn’t find documented effects from fish cooked by explosives or over-tenderized fish from bomb blasts. Intact fish with cracked bones and ruptured swim bladders are probably signs of fish that got bombed. But we’ll go with common sense, kalau hangus dy don’t eat.

So, what are we gonna do about it? Bomb the fishermen?

Nope. But we do have something better and way cooler.

Story time! As we know, certain states in U.S let people carry guns around, but not everyone uses it wisely. In high-crime rate communities, more than 80% of shooting incidents aren’t reported. To solve this issue, Silicon-Valley-based technology company (Shotspotter) invented a device to detect gun blast in the area. By doing so, the devices installed can pin point the origin of the gun fire almost immediately. That way, they can respond to the site as quickly as possible, keeping civilians safe. 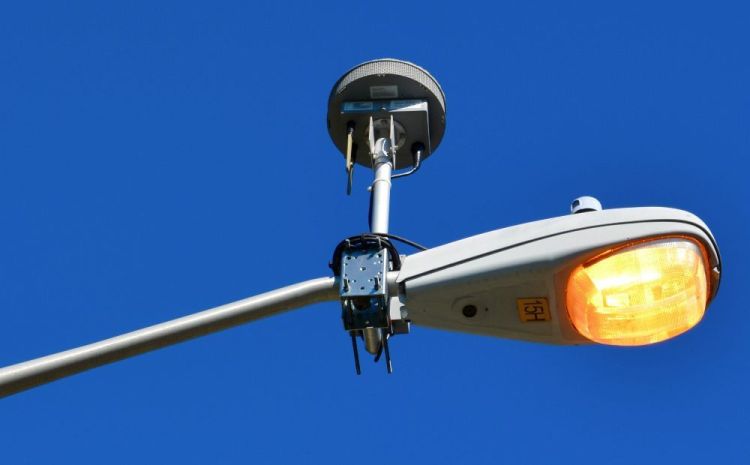 A shotspotter on a lamp. Image from Patchogue

Back to the exploding fish issue. An NGO called Stop Fish Bombing applied the same concept, and even made a mini-documentary about how Shotspotter can be used to detect underwater blasts and stop fish bombing.

Similarly, the detector was modified to work underwater, so authorities in Sabah could immediately pin point the blast location with GPS to capture blasting fishermen.

Awesome right? It’s been reported the ground-breaking technology has already been implemented. It has the ability to detect blasts in less than 10 seconds, sending in notifications as fast as 4 seconds later. What’s more impressive is that it could detect sound waves up to 25km away! But whether or not the authorities can catch them before they make a run from it is a different story lah. When the detectors locate you and the polis is otw, you swim! Source

While preventive measures are taken, perhaps authorities should also educate them about the long term effects. For years, the practice is passed from one generation to the next, so they don’t question its danger. With enough education, hopefully the only fish bomb we’ll see is this.

Share this article:
NAH, BACA:
OMG can Johor actually become its own country!?