Over the weekend, you might have noticed that people have suddenly been talking about the menstrual pad brand Libresse. If you’ve missed the festivities, boy have we got some tea for you.

Apparently, the Women’s Council of YADIM, a local preaching-related body, had recently raised their concern about the brand’s packaging which featured women’s Virginias.

By the way, we’ve opted to use substitute words when referring to the female genitalia to avoid offending anyone who’s offended by fajitas. Because this obviously makes more sense.

Libresse had apparently integrated and promoted this Vegeta design as a nyonya kebaya motif on their sanitary pad packagings, on kebaya dresses, as well as an origami in their ‘Know Your V‘ campaign, and according to YADIM’s Women Council, this is

How we imagined the Yadim Women reacted. The character’s name is Miss Gristlepuss, btw. Gif from KnowYourMeme.

In case you haven’t seen it yet, here’s what one version of the design looked like:

The chrysanthemum version of the design. Img from Libresse, but page no longer available.

These lip-smacking designs are actually part of a limited edition range by Libresse, where they re-imagined the Nyonya kebaya designs with chrysanthemums and peonies with Volvos at their center. The campaign, among other things, aimed to break our society’s taboos surrounding women’s Vajayjaymartins and stop girls from feeling ashamed of their bodies and bodily processes.

Apparently, a lot of people online would agree that it’s not that offensive. Especially since…

As various netizens had pointed out, there are many more local ad campaigns far more offensive to women than this one in the past, yet they didn’t get commented on by YADIM. Let’s have a quick tour, shall we?

Exhibit A: a breast enhancing ad Translation: Husband Suffocates in Embrace. Very Effective. Pro Montok. Elastic and Superb. “Once upon a time, my husband would tease me saying that they’re like 20 cents nasi lemak. No appetite whatsoever. I anguished on whether my husband would look for another female to the point of making a resolution to ‘superb-ize’ my breasts. Now he’s the one who’s overly jealous when the men out there leered at me, which is no surprise as I am now excessively sexy.” Mrs Rabiatul, 24 years. Previously an A cup.

Rating: We’re not saying that her bra is stuffed, but the facial expression reflects someone whose bad memories had been replaced by good mammaries. Back pain/10.

Exhibit B: a collagen juice that makes you virgin again Translation: “Oh!! My stuffy and tight wife… I stick to you every day.” “I stay rubbery, tight and looking young despite already having 4 children…”

Rating: Besides the lady in his arms, the man’s undressing stare hari-hari melekat to everyone within the ad’s line of sight as well. Very uncomfortable. HR/10.

Exhibit C: a gel you slather on your vagilisk* Rating: The copywriting is nothing compared to the abomination that is the visual. The ravenous expression on this model would be keeping some of us celibate for months. Traumatizing/10.

Three examples should be more than enough for anyone, but you should also know that there are some of these ads are on billboards by the highways as well, although they seem a lot tamer by comparison. Last year, an activist made headlines when he managed to raise enough awareness to take down two such offensive billboards. One of them was for a herbal preparation under the name CowPex, while the other was a soap ad lathered in innuendo: “this soap is not for bachelors“. Cowpex is allegedly a corrupted spelling for ‘kopek’, a Malay slang term for breasts, and although the ad seems innocent enough, the tiny hashtag at the bottom clears any doubt on what it’s about: #mantap_anjal_ketat, which translates to #superb_elastic_tight.

Who gets to say which ads are offensive enough to take down? 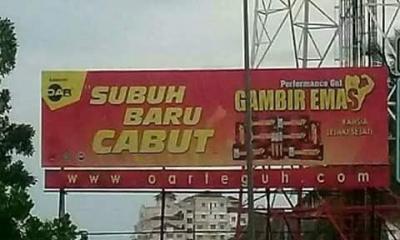 This ad is for men, but it’s worth a mention. “Only pull out at dawn.” Img from Lowyat’s Forums.

Ultimately, it seems that the answer is whoever’s offended. The advertisement industry in Malaysia is self-regulating, basically meaning that people in the advertising business sort out this kind of crap among themselves, subject to various laws, regulations and authorities. As for what can or cannot go into ads, there are generally two guidelines you can refer to:

NAH, BACA:
This Malaysian cycled from Alor Star to CHINA, and then THE WORLD! But.. why?!

You can check out the codes yourself through those links, but they generally list out things that should not be in your ads, with some relevant highlights being:

The reason why you might still see ads that do these things is that these are just guidelines, and it’s up to the advertisers to follow them or not. They still care about bad ads, though, since it reflects on the industry as a whole.

So if you feel like an ad violates any of the guidelines mentioned in the codes, you can first talk to the advertiser about it, and if that fails, you can lodge a complaint to either the CMCF’s Complaints Bureau or the Chairman of the ASAM, depending on the medium. The codes contain more details on how to complain.

If your complaint is valid, the ads might get taken down, the advertiser might get warned or fined, and potentially banned from advertising again. Or, if you suspect that a billboard had been erected illegally (legal billboards need to go through Dewan Bahasa and Pustaka, among other things), you can always complain to the local authorities, like in the case of the offensive billboards from earlier. The CowPex ad eventually got torn down by Selayang City Council. Img from Lobak Merah.

But anyway, it seems that the takeaway from this is that unless someone complaints about an ad, whether to the advertiser or the ASAM/CMCF, nothing will be done about them.

Following the complaint by YADIM’s Women Council, Libresse had responded by voluntarily taking down their ads. Interestingly though…

Despite taking down their ads, it seems that Libresse won this round

Taboos surrounding Vajayzees and menstruation are pretty pervasive, and not just in our culture. There’s an interesting thing going on where people who supported Libresse had uploaded pictures of the bunga telang, which looks like this:

Although not quite the flower in the ads, it looks like a clitoris and a pair of Vuvuzelas, an observation reinforced by its scientific name: Clitoria ternatea. Over the years, some botanists had debated on whether that genus name is in good taste, and they had proposed less controversial names for flowers in this genus like Vexillaria and Nauchea. But Clitoria persisted, because… they do look like that, and masking it with another name wouldn’t benefit anyone trying to identify a Clitoria.

In the same vein as the Clitoria anecdote, trying to hide and silence conversations regarding the female anatomy wouldn’t benefit those who needs to know – especially when we’re already lacking in terms of sex education. But perhaps some sections of our society are not yet ready for vulcan-shaped objects to be displayed in public.

Still, it’s interesting to note how this particular incident actually promoted the campaign even more. Influencers and MPs spoke of the issue, and people are actually buying the supposedly offending products and posting it on social media.

To their credit, YADIM did try to care for women in their own way – for example, they did recently made an initiative to include free sanitary pads at their food banks to address menstrual poverty among the city folk – but their statement on the Libresse issue, coupled with their silence on many, many other more pressing issues concerning women in this country, did not go well with most people at all. Perhaps they did raise their concerns about the older ads as well, but we dunno since the YADIM Women Council’s page had only been created this year.

Regardless of all that, perhaps the biggest win for Libresse in this drama is that it opens up a whole conversation about whether or not something that should be basic knowledge should be so taboo. As a plus, the drama also brings the public’s attention once more to inappropriate ads that are still running out there, for example like this one: Well, now you know what to do when you encounter one of these.