Alright so we know, we know: it’s our second Twitter related story in two days. But before the MCMC’s old tweets became national news, there was actually another weird trend in the local Twitter scenes yesterday. See, you’ve probably heard by now that:

A) Several states in Malaysia are going back into a Movement Control Order (MCO), and

B) A state of emergency has just been announced.

And almost immediately, Malaysians on social media began making jokes and memes about it. On Twitter however, the state of emergency announcement also brought about the trend ‘darurat makan babi’. Indeed, just typing ‘darurat’ into Twitter resulted in that as your first result: 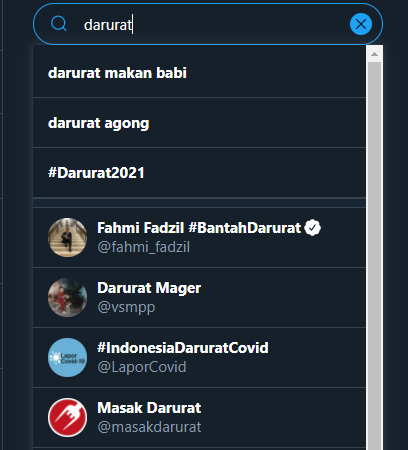 And if you were to scroll thru it, you may find some joke tweets such as: Just to reiterate again, these were very much likely to be jokes and not to be taken seriously. Of course, you may or may not find these funny. But for those who are a lil out of the loop, here’s what those joke tweets are referencing:

Pork is forbidden in Islam, unless in extreme necessity

It’s probably common knowledge by now that pork is forbidden in Islam. However, the Holy Quran does mention that in extreme cases of necessity (aka ‘darurat‘), it would not be considered a sinful act.

“O believers! Eat from the good things We have provided for you. And give thanks to Allah if you truly worship Him alone.

He has only forbidden you to eat carrion, blood, swine, and what is slaughtered in the name of any other than Allah. But if someone is compelled by necessity — neither driven by desire nor exceeding immediate need — they will not be sinful. Surely Allah is All-Forgiving, Most Merciful.” – Quran, Al-Baqarah, 2:172-173

And so, it was the announcement of the ‘darurat’ that led to Twitterjaya lightheartedly making a joke of the situation we find ourselves in just the first few weeks of 2021. That being said, it probably goes without saying that the ‘darurat’ in the scriptures wasn’t referring to the emergency that Prime Minister Muhyiddin had announced. Instead, it refers to situations of dire straits, forced by necessity. Indeed, if you really were on a desert island with absolutely nothing else, you could perhaps make an exception for pork. But even then, it should only be for survival, and you should only eat a necessary amount. And seeing as you could right now just go to your local supermarket to get food supplies, you should probably do that instead.

However, it should also be mentioned that Islam is not the only religion that forbids its followers from eating pork. In the Hebrew Bible, there are also a couple of mentions of animals that people aren’t allowed to eat.

“You may eat any animal that has a divided hoof and that chews the cud.” – Leviticus, 11:3

“And the pig, though it has a divided hoof, does not chew the cud; it is unclean for you. You must not eat their meat or touch their carcasses; they are unclean for you.” – Leviticus, 11:7-8

So why would there be multiple religions with prohibitions on pork? Well, according to anthropologists (fancy word for scientists who research human societies) it could be that they both originated in the Middle East.

NAH, BACA:
Malaysia has one stop crisis centers for rape victims, and it's one of the world's best

Pigs in ancient Middle East were even dirtier than normal

According to anthropologist Marvin Harris in his book ‘Good to Eat: Riddles of Food and Culture’, pigs haven’t always had the reputation of being gross and dirty animals.

Pigs can’t sweat, and as such, they need to stay cool in other ways. For wild pigs, more often than not, this means finding shelter under trees in the forests. As civilization began however, more and more trees were cut and cities were built; in ancient Middle East especially, this led to the weather becoming even more hot and arid. The garbage and poop that these ancient cities produced also attracted more and more pigs. However, without trees, pigs began wallowing in mud to stay cool. And when there’s no mud, well….

“Pigs can’t sweat… it depends on wetting itself down with moisture… Here, then, is the explanation for the pig’s love of wallowing in mud.

As temperatures rise… a pig deprived of clean mudholes will become desperate and begin to wallow in its own feces and urine in order to avoid heat stroke,” – Marvin Harris, anthropologist, in Good to Eat: Riddles of Food and Culture, pg 73-74

Pigs were also considered uneconomical to the ancient Middle Easterns. Pigs, unlike cows or goats, cannot eat grass. Instead, pigs would prefer to eat grain – the same grain that humans would eat. Not to mention that raising pigs required things like shade and a lot of water and mud, while not offering much else in return; cows and goats meanwhile could produce milk and help plow the land, and chickens produce eggs too.

Harris believes that a combination of these reasons led the ancient Middle Easterners to develop an aversion to pork, and as multiple religions developed in the area, this tradition of aversion to pork became codified as religious law as well.

That being said, that’s only his explanation for how the pork taboo originated from. These days, there are more studies shown about pork’s safety, or rather lack of it, that can only strengthen the aversion to pork. The office of the Mufti of the Federal Territories even has a page to answering the question of why pork is forbidden, which you can check out here. In that page, it states:

“Using modern medical technology, eating swine has been proven to be harmful across the globe, especially for hot climate countries.

In the near future, there may be more evidences proving the harms of swine and reveal more wisdom of why it is prohibited. This is in line with the statement of Allah SWT (وَيُحَرِّمُ عَلَيْهِمُ الْخَبَائِثَ), which means: “and prohibits for them the evil.” (Surah al-A’raf:157),” – as quoted from the website of the Mufti of Federal Territory

Pork liver for example is one of the top transmitters of hepatitis E, a virus that can lead to serious illness and sometimes even death. Meanwhile, higher pork intake has also been linked with multiple sclerosis and diseases caused by bacteria in undercooked pork.

Of course, if you’re a non-Muslim without an aversion to pork, you can continue to consume it. But just with everything else in the world, too much of anything is a bad thing, and moderation is key.