Did you know that CILI was actually evolved to repel living beings from eating it? In fact, some farmers use chillies to repel ELEPHANTS and RATS from their crops. In fact, in the entire animal kingdom, only two types of living beings are crazy enough to eat CILI. 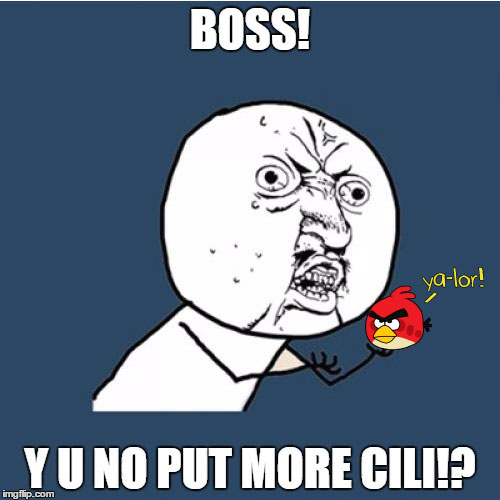 Okla, not just Malaysians, but the rest of the human race also (except most angmohs). But anyways, the point is… Malaysians LOVE their spicy food. In fact, the last time we asked which were Malaysia’s spiciest foods, EVERYONE had a suggestion. Some of the suggestions, like Kajang spicy soup seriously kenot make it, but others… like CHILLI RUSH, gave one of our writers (who likes tomyam apparently… pfft) some serious cramps.

Mainly cos we tricked her into eating it… heehee. ANYWAYS, she was suffering ALOT, and we tried everything…

And then we realised that EVERYONE has their own way of getting rid of the PEDAS. So why not ask ugaiz to send us YOUR favourite ways to win some yummy MAGGI noodles?

But why MAGGI wanna know how to get rid of the PEDAS?! Cos Maggi love ugaiz that’s why! They just released their new MAGGI LETUP in two flavours – Kari CILI API and Goreng Kari Berasap, specially for us sucker-for-punishment Malaysians (and birds)! And it’s seriously pail-of-peluh HOT! Maggi claims it’s the hottest range of noodles they’ve EVER released – and Jo-Lyn is kinda scared to argue with them.

Since they’re releasing such a scarily hot noodle to the market, better release the cures too right? So ask ugaiz lor. In fact, they loves you SOOOO much – that those with the winning entries (the stranger and more effective, the better!) will be given a JUMBO PACK of MAGGI LETUP to test out your CURE PEDAS tactics!

Fill up the form below to join. Contest closes 25th September 2015, so HURRY!