[This article was originally written by SOSCILI. Click here to read the BM version.]

Whenever there’s a water shortage or electricity outage, we sometimes take a personal and quiet moment to think about how we took the basic things for granted. And when it comes to national security, it kinda falls into the group of things we take for granted everyday too.

Using this meme unironically for once.

On 2nd of October 2017, PM Najib Razak himself officiated a ceremonious celebration for Hari Pahlawan 2017 at the Dataran Pahlawan Negara. The day serves to commemorate the contributions and sacrifices of the armed forces, particularly the ones who gave their lives serving the country.

“We must forever acknowledge and remember the sacrifices our fighters made, because we would not have the peace and safety we have today without them.” – PM Najib Razak, quoted from Utusan

But actually, Hari Pahlawan is usually celebrated yearly on 31st of July, in conjunction with the ending of the communist emergency in 1960. But Malaysia’s military forces have come a long way since then, from being dependent on British training, to having a world renowned special branch forces of our own. In fact, our military had more than a few proud moments, including the time when…

Our troops helped rescue a bunch of American soldiers in Somalia 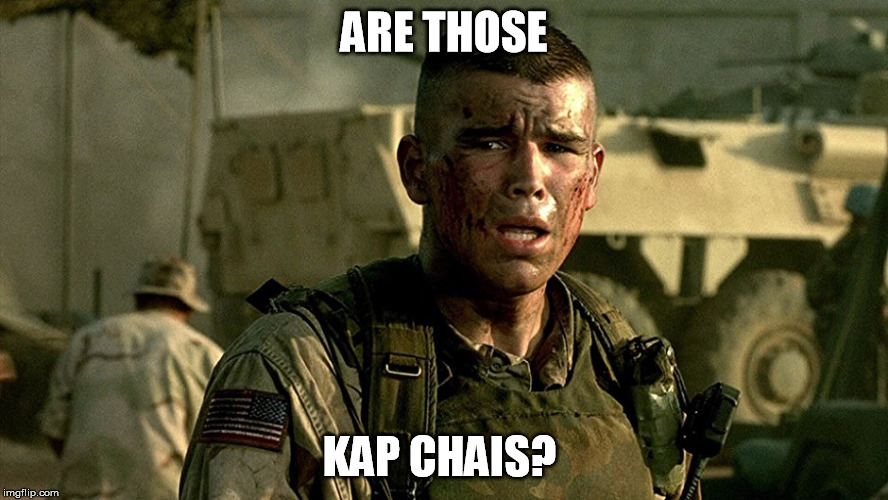 Original image from the Black Hawk Down movie.

Our army took part in peace keeping missions in Somalia, Bosnia, and Lebanon, nations that were embroiled in civil war. Perhaps most famously, we were part of the rescue mission that was made famous by that Hollywood movie “Black Hawk Down“. The incident in 1993 saw more than 100 of Malaysian soldiers deployed with Pakistani soldiers to rescue some 70 U.S. rangers trapped in Moghadisu, Somalia. The mission took 2 days to complete, 1 Malaysian soldier was killed, and seven injured. But sadly, our part had been downplayed significantly in the movie.

When we’re not busy showing the enemy who’s boss, the army also assists in humanitarian and peace keeping missions. We are actually one of the more active countries in the United Nations (UN) in this regard, involved in missions across 10 countries in 2012. But long before that, we had a hand in (surprisingly) many historic events in Southeast Asia. According to General Datuk Raja Affandi Raja Mohamed Noor, the Malaysian army has a long and impressive resume. The Malaysian army played a role in events ranging from World War 2, the Vietnam war, and even the fall of Cambodia. On our own soil, the army had faced the communist emergency, the Indonesian confrontation, and also the more recent Lahad Datu incident.

For Vietnam and Cambodia, we only provided training and assistance to our neighbours so that they could fight their own communist threat. But why they asked us to be their sifu? Because it turns out, we’re pretty badass when it comes to fighting in the jungle. One of the most renowned and feared branch of Malaysia’s military is the Grup Gerakan Khas, also known as the GGK or the green berets. They actually started off as a special unit that was sent into the forest to weed out communist forces. According to a documentary on the GGK, the very first batch was trained by Britain’s very own Royal Marine Commandos. 1600 soldiers volunteered, 300 were selected, but only 12 passed in the end.

Until today, the harsh training and strict selection criteria still remain with the special branch force. At the gate of the top secret training site (just kidding, it’s in Melaka), the words Datangmu tidak diundang, jika ragu diharap pulang (You came here uninvited, go home if you have doubts) are placed up front for all to see.

As if the tiger wasn’t enough to show they mean business. Screenshot from the history channel documentary video.

Recruits for this special branch have to first be filtered by a 6 weeks selection process, but that’s only the beginning. They then have to endure another 13 week selection course, designed to eliminate the “unworthy” through ruthless exercises and training. On the very first day, recruits already have to go through 7 hours of almost non-stop exercise, then followed by a 11km run… in the heat of the afternoon… while carrying 17kg worth of load… and to be completed in 87 minutes.

After that, they have to complete a couple of obstacle courses, one being the “Tarzan course” which is 10 meters above ground and done in the dead of night with little to no light. Then there is a 160km march that takes 3 full days to complete. Oh and if they are sent to the hospital at any given time during the course, they will automatically fail. 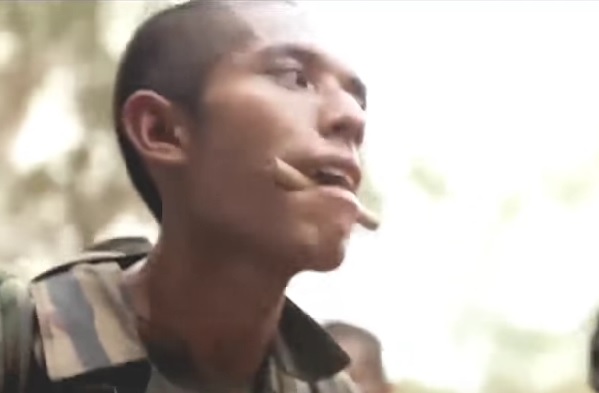 Recruits bite on a piece of wood to prevent biting their own tongue due to extreme dehydration, where one can lose control of their muscles. Screenshot from history channel documentary.

There is even a part of the training where the soldiers are dropped deep in the swamps of Malaysia, where they have survive for 2 weeks, collecting their own water, and hunt monkeys, lizards, mud skippers and snails (which are limited to 3 a day because its easy to catch) for food. They are allowed to eat whatever they can catch, but the rule is that they have to share their harvest (or risk severe punishment), because real war isn’t like a Rambo or Taken movie. The ability to work in groups, ability to issue and follow orders are equally as important as the soldier’s individual capabilities.

“The success of a the military is more than just its assets or the strength of its soldiers.” – Vice Admiral Datuk Seri Ahmad Kamarulzaman Ahmad Badaruddin, quoted from Utusan

But it’s not just the GGK that take on extreme training. Air force soldiers have to perform HALO exercises (not the XBOX one) where they’re brought so far up into the sky, anyone would pass out in 20 seconds if not supplied oxygen. They also have “eagle swift” training, where they parachute in the dark of night. The navy special branch (known as Pasukan Khas Laut TLDM) has “drown proofing”, where they have swimming lessons… with both hands and legs tied. And here all we think about the military is guns, tanks and explosions.

NAH, BACA:
This Malaysian sayur may help you lose weight. It may also give you a deadly lung disease.

But, the military hasn’t had the best image locally in the past year

Earlier in September 2017, 2 members of the Malaysian Royal Navy died after being detained for being late on several occasions. Autopsy report on both the deceased found internal bleeding in the lungs, leading to investigators to believe that they were tortured to death. The police have arrested 3 men and the investigation is still on going. Around June of the same year, a 21 year old cadet from Universiti Pertahanan Nasional Malaysia (UPNM) died after being tortured, with 36 students being arrested, and 5 got charged in the end.

This was far from the first time that it has happened in Malaysia. Another member in the royal navy was beaten to death by fellow members of the navy in 2013, but early reports simply dismissed it as a training accident. At the end of the investigation, 3 of the culprits were suspended from duty, and sentenced to a maximum 30 years in prison. The bullying and hazing culture in the military is a common occurrence, even earning itself its own term and scenes in famous movies. But that doesn’t mean it should be normalised and accepted, because it can drive people to do some very extreme things.

Perhaps the most extreme example in Malaysia is Private Adam, who went on a shooting rampage in the streets of Chow Kit almost 30 years ago. Though rumours were that he was avenging his beloved brother who died during some drama involving a golfing sultan, the real story was uncovered in a book by Syahril A.Kadir. In the book, Private Adam tells the real reason of his rampage, and recounts the details of his physical and sexual abuse when he was in camp.

“My hands got burn marks from being treated as a human ashtray. I was forced to lick the bottom of a slipper like a dog and drink water mixed with soy sauce, vinegar, belacan, curry and sugar,” – Private Adam recalled, quoted from The Star

Our military has its problems, but officials have been quick to acknowledge them

Throughout all the incidents, authorities from the military and the gomen have condemned the extreme acts.

“No one will escape answering the law if found guilty.” – Defence Minister Datuk Seri Hishammuddin Hussein said on his twitter

“Justice will be served, and I will make sure those who are guilty will face the law because their actions tarnish the image, welfare and integrity of the service.” – Chief of Navy Tan Sri Kamarulzaman Badaruddin said when he confirmed the 2 deaths on October 2017

Discipline is taken serious in the military world, where punctuality and responsibility are offenses worthy of punishment. Still, that doesn’t mean the offenders should be subjected to impulsive beatings or allowed to be tortured to death. Despite all that, we really admire and appreciate all that the army has done to keep the peace in Malaysia, be it stopping communist extremist, shipping supplies to needy countries, or patrolling shopping malls. After all, we cannot begin to imagine what it’s like to have the duty to at any moment give your life for the country.