Yaaas, stay calm. Let us talk about this first k.

A few days ago, the US Embassy released a statement that advised American citizens to stay away from Jalan Alor on the 24th of September because they had received ‘credible threat information regarding a potential terrorist attack’.  Our friends at Says.com have also gotten down to compiling what we know of the situation so far (which means we’re probably not gonna be talking about it cos they beat us to it again  😐 ).

This definitely isn’t the first time that we’ve been warned of an ISIS attack though. Back in May, our Bukit Aman Special Branch Counter Terrorism Division director, Senior Assistant Commissioner Datuk Ayub Khan Mydin (omg that would have taken a whole breath) said this. We’ve actually talked about ISIS before in an article about a year ago titled ‘Is ISIS a threat to Malaysia?’. And a year on, articles like this & this indicate that ISIS has been making its move in Malaysia. So yea, we’re not very sure if we can answer that question with a ‘no’ atm la.

But this recent warning is a good time for us to actually consider if our country is ready to deal with the ISIS threat. And that’s what we did la.

What we found is that Malaysia may be more on the prepared side than on the unprepared side. Here’s 4 points that indicate that is the case.

1. We’ve dealt with an armed invasion before

Many of you might recall that we once dealt with an armed invasion over in East Malaysia. It doesn’t seem like it’s been very long since it happened, but it’s actually been more than 2 years since the Lahad Datu invasion. For those of you who need a refresher, here’s a chronological account of the events by MalaysiaKini from when the the Sulu sultanate’s forces landed all the way until the Malaysia’s gomen assault.

But in short, the invasion started on the 12th of February 2013 & lasted about a month. About 200 men landed at Kampung Tanduo, Sabah and set up camp there, and staked their claim on Sabah. There were discussions going back & forth, but it seems that the turning point was when 6 of policemen were killed in an ambush on the 2nd of March 2013. 3 days later, on the 5th of March, it was reported that we deployed friggin fighter jets on them to end the standoff.

However, we do acknowledge that not everyone thinks that we handled the Lahad Datu invasion properly. Articles like this & this actually question certain things that the gomen did, or chose not to do. A BN MP also went as far as to condemn the gomen for negotiating with the intruders.

But even if it may not be an apples to apples comparison, the whole Lahad Datu Invasion can give us an indication of how our gomen would deal with armed militants la.

2. We’ve been pretty efficient at nabbing Islamic State (IS) members

As of September this year, our local authorities have detained more than 122 people over suspected links to Islamic State and have further identified between 100 – 200 IS supporters within the country. Some of the suspects arrested in Malaysia for being linked to ISIS. Image from ibtimes.com.

According to an analyst from the Brookings Institute, The number of Malaysian fighters in IS number between 60 -150… which is about on par with Indonesian fighters in IS. Considering that our population is 1/10 that of Indonesia, this indicates that Malaysians are joining IS at a higher rate than Indonesians.

Even more worrying, before the US warning of a potential attack in Jalan Alor, the counterterror official with the long title warned back in April that an IS attack on Malaysian soil was imminent:

“It is not a matter of if we will be attacked but when.” – Datuk Ayub Khan Mydin, as quoted by Today Online.

But despite all that, in August last year authorities foiled a plan by an IS-inspired group to bomb the Carlsberg Brewery as well as other pubs and clubs. They also arrested a group of 12 who were planning an attack on Putrajaya in April this year. The latter group was found to have these things with them when they were arrested. Police believe they are bomb-making ingredients. Image from The Malaysian Insider.

The cops have also shown themselves to be quite efficient with the Jalan Alor threat, arresting three suspects a day after the warning was issued based on information obtained from previously-arrested suspects.

The ISIS threat has also led PM Najib to further amend our current anti-terrorism laws, but that’s another story on its own la.

But dayummm, that’s a lot of arrests la. And while we can’t know for sure if our law-enforcers have covered all bases, as long as we remain free of ISIS attacks, it may be because they’re going a good job?

3. Malaysia has a pretty good track record when it comes to dealing with militants.

Aside from the Lahad Datu crisis, Malaysia has had several other close encounters with militants – most of which were quite well handled if news accounts are to be believed. We can probably credit this to the years spent fighting the post-independence communist insurgency from 1968 – 1989 in Peninsula Malaysia and 1962 – 1990 in East Malaysia. Here are a few examples starting with, of course, the communists:

The communist threat to Malaysia in the 60’s led to the formation of the Pasukan Gerakan Khas (PGK) – an elite counter-terrorism and special operations unit under the Royal Malaysian Police (Polis DiRaja Malaysia – PDRM). According to this picture, some of the training involves firing a bullet between the trainer’s hands. SO HARDCORE! – Image from Wikiwand. 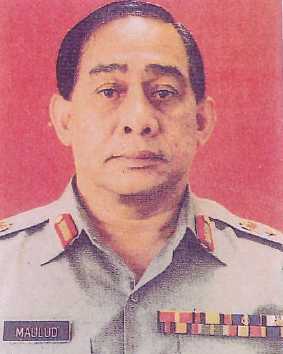 However, the story we want to highlight comes from a unit within the Malaysian Army called the Kor Risik DiRaja, or the Royal Intelligence Corps, specializing in intelligence work, surveillance, espionage, and psychological warfare. You know, the James Bond stuff  😎

There’s an account from retired Brig Jen Dato’ Maulud Maamin, who was assigned a mission to take down a senior Communist leader and his wife. Things didn’t go according to plan, and Datuk Maulub literally had to do some James Bond stuff.

The entire account is quite long (in 7 parts) but it’s really worth reading as it also gives insight into the background work that these guys do in understanding the enemy. You can check it out here. A JRA militant with two hostages. Image from the BBC. The AIA building in Jalan Ampang was also home to the US and Swedish embassies in the 70’s. One fine day in August 1975, five armed members from the Japanese Red Army, a militant Communist group, stormed the building and took 53 embassy employees hostage.. including the United States Consul.

The negotiations were hardly simple since it involved numerous countries. Better yet, in order to secure the release of the hostages, Secretary-General for the Home Ministry Tan Sri Osman Samsuddin Cassim and Deputy Transport Minister Dato’ Ramli Omar offered themselves as replacements.

“I felt like I had been given the death sentence when I knew I would be one of the hostages on the third day of the crisis. But it was my responsibility as a civil servant.’’ – Tan Sri Osman Samsuddin Cassim, as quoted by The Star.

And the end result? Zero casualties.

In 2000, 29 members of the militant religious sect Al-Ma’unah went on a mission to overthrow the Malaysian government. They conned their way into an Army Reserve camp in Perak, making off with assault rifles, heavy machine guns, and grenade launchers. This resulted in a four-day standoff involving various divisions of the Malaysian Army and Police force – including Pasukan Gerakan Khas (mentioned above). The hero of this story is DSP Abd Razak Mohd Yusof, a member of the Komado 69 unit. His role was pivotal in negotiations for the militants’ surrender, most notably when he ventured into the group’s hideout alone and chose to not shoot at one of the leaders who was preparing himself for prayers; instead convincing him to surrender. You can read his interview here.

While these examples illustrate our history with militants, we gotta admit that these did happen a while back la. So we sincerely hope that time hasn’t dulled the skills of our law-enforcers la.

But even if our skills may need a bit of brushing up, what about will? More specifically, the will of our leaders.

4. Many of our leaders condemn ISIS

And we’re talking about leaders from both the gomen & the opposition.

It would be no surprise to say that DAP has completely rejected ISIS and called upon others to do the same. Besides that, Dato’ Seri Anwar Ibrahim once said that ISIS’ failure to understand Islam has led to them choosing violence.

“We need to get back to the roots of understanding Islam and the humanity that its teaching contains.” – Dato’ Seri Anwar Ibrahim, as quoted by The Malaysian Insider.

On the gomen side, the person who is actually spearheading (by that we mean the one who usually announces them) all the ISIS arrests in our country (believe it or not) is actually our DPM, Zahid Hamidi. As our current Home Minister, our DPM has been the face of Malaysia’s fight against ISIS. So much so that he even controversially showed a video of an ISIS beheading to the UMNO delegates to make a point about them.

“This kind of act should not happen among the world community. Don’t let ourselves be influenced by this deviant act which clearly contravenes the teachings of Islam.” – Deputy Prime Minister, Dato’ Seri Zahid Hamidi, after showing UMNO delegates an ISIS beheading video, as quoted by The Sun. Other prominent members of the gomen who have voiced their disapproval of ISIS include Tun Mahathir & former DPM Tan Sri Muhyiddin Yassin.

“There is no place for violence in Islam, Islam is a religion of peace but some people have interpreted Islam in the wrong way.” – Tun Dr. Mahathir Mohamad, as quoted by The Malay Mail Online.

But what about the big guy? What about our PM?

He actually came under the spotlight when he made a statement that sounded like he endorsed them. But he later came out to say that this was taken out of context and later said separately that he condemned them.

“Malaysia strongly condemns the actions of the Islamic State militants in Syria and Iraq. We are deeply saddened by the crimes committed in the name of Islam, a religion of peace.” – Dato’ Seri Najib Razak as quoted by The Malay Mail Online.

So this means our country is safe from ISIS?

This article by The Daily Mail UK talks about how they haven’t just been moving in Malaysia but the whole of Southeast Asia.

“Thousands from countries such as Indonesia, Singapore, Thailand the Philippines and Malaysia have joined ISIS on the battlefield in the Middle East. And the terror group has ‘tens of thousands’ of supporters and sympathisers in those countries.” – The Daily Mail UK Image from The Daily Mail UK.

And we know they’re already among us. The Malaysian Insider reports that in various raids across the country last month, 6 out of the 10 people arrested were security forces personnel. The Star reports that 1 of the 10 was even a KLIA screener! 😯

Thus, the ISIS issue is an issue that no country can take lightly. Despite all that we’ve done in dealing with militants and terrorists so far, we cannot rest on our loins (as the Lahad Datu Standoff has shown).

So can we say for sure that we are safe from ISIS? Probably not. But for the time being, it looks like our country has taken a stand against them.

And maybe that is sufficient for now.

This article was co-written by Johannan & UiHua.