Most of the time, we think we know everything about our country’s history, what with five years of studying our Sejarah textbooks in secondary school and the tidbits of information we get in everyday conversations. But then sometimes, our history throw us in for a loop and get us all like…what?

Cilisos has had a, well, history of articles on odd facts about Malaysia’s past, and this time, we’re gonna talk to you about a weird story on the relationship of Penang and Kedah. Recently, you might have encountered a little incident involving the vandalization of a Francis Light statue in Penang. 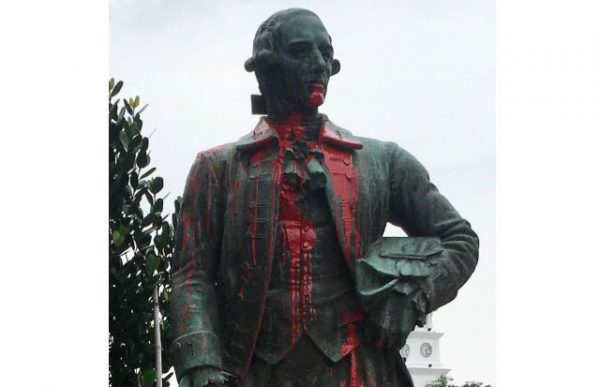 In case you don’t know – ha…didn’t pay attention in Sejarah classes la – Francis Light was considered the founder of the Penang state during a time when the British was busy adding on to its gallery of colonies. After Francis Light had passed away, the colonizers were apparently so proud of him that they erected a statue for him in the 1930s.

Now we don’t know for sure why the statue was vandalized or even who vandalized it, but while we were performing some research about this angmoh fella, we found something else about him. Apparently, the island of Penang used to belong to Kedah, and Francis Light cheated it right out from under Kedah!

How did that happen? Well, we gotta start from the very beginning, so bear with us. There was a time when… A depiction of the Siamese-Burmese war. Image from Age of Revolution

If you even pay a little attention to the map, you’ll know that Kedah’s only separated from Thailand through a mere border, and Thailand was better known as Siam in the past.

And historically, before the British has fully extended its influence in the Malay states, Siam pretty much dominated Kedah and considered Kedah its a tributary state under its control in the 1800s, meaning that Kedah regularly paid tributes to the Siam rulers – and this was in spite of the existence of the Kedah Sultanate. Apparently, one of the tributes that Kedah used to send Siam was something called the bunga mas, which is basically golden and silver flowers.

But the thing was that Siam wasn’t the only one interested in Kedah, as Burma was too – now known as Myanmar – which is kinda funny, considering Burma’s only on top of Siam on the map. The reason that Kedah was so attractive to these two parties was because it used to be one of the biggest trading posts that attracted merchants from various parts of the world, making it a considerably lucrative civilization.

So, you know, with their eyes zeroed in on the cash, Siam and Burma went to war with each other on their elephants to gain control with Kedah stuck in the middle. And in that time, Kedah stopped sending tributes to Siam, because they’re kinda, you know, stuck in a war. In the end, though, Siam had come out the victor and managed to retain control of Kedah, then they started demanding for tributes again from Kedah, alongside some workforce and manpower. At the time, Kedah’s Sultan was Sultan Abdullah Mukarram Shah, and he was apparently starting to feel threatened when Siam made these demands, thinking that Siam had been trying to reduce his power.

Not just that, the people in Kedah was also said to be unhappy with Sultan Abdullah’s ascension to the throne, saying that he was not fit to be a ruler, but that’s a story for another time. In short, Sultan Abdullah was basically being threatened internally and externally, and he didn’t really have the capacity to combat these threats himself, so…

Sultan Abdullah asked for help from the angmohs Actually, before the Sultan had even reached out, the British East India Company (EIC), basically a British colonization agent, already had their eyes on conquering Penang, but the deal didn’t exactly happen because of that war between Siam and Burma – remember when we said Penang used to be Kedah’s territory? Or more specifically, Francis Light had already been interested in Penang since very early on. As we’ve mentioned above, Francis Light’s the guy who founded Penang back in the day.

“[Penang is] a convenient magazine for the Eastern Trade.” – Light in 1771, as quoted from Sabrizain

But then the war was over, and when Sultan Abdullah himself approached the EIC for help, Light kinda pounced at the chance. The Sultan seemed to have considered that the only way to ward away Siam and potentially Burma was through British military protection and assistance. So, with the EIC’s blessing, Light began discussions with Sultan Abdullah.

“…promising that the King and the Governor-General would assist…in whatever might be required, and would prevent the enemies of Kedah engaging in proceedings detrimental to the country.” – Light in 1786, as quoted from Journal of the Malaysian Branch of the Royal Asiatic Society The early days of Penang. Image from A Stamp A Day

Basically, their agreement stipulated that:

If you look closely, Kedah was leasing Penang to the British, as in Light was just renting Penang, which would kinda imply that it’s not entirely his – we’re gonna talk more about this later. Following the agreement, Light was named Superintendent of the Penang island. Kedah and Penang being under his control also marked the beginning of British penetration in pre-independence Malaya and colonization of Southeast Asia as a whole.

The Penang island then wasn’t like the Penang island now – it was said that the island had been sparsely populated, populated by only 58 people when Light took over. In addition, the authorities also had to chase away pirates – yes, they existed – from docking there. However, Light still found it an attractive location, because of the island’s potential to become an ideal trade center. He renamed it the Prince of Wales Island and established Georgetown in honor of the British monarch in 1786, King George III.

This is for all the Hamilton fans out there. GIF from Pinterest

But then it turned out that…

Light had never intended to keep his promises

So in case you have a short memory, we mentioned above that even though the war between Siam and Burma was over, Sultan Abdullah was still kinda scared that Siam would attack them anyway, which was why he established the partnership with the angmohs in the first place. Well, as it turned out, Sultan Abdullah had been right to be scared, because Siam got pissed at him for not sending him tributes anymore and started attacking Kedah on their elephants around the same year as well. Bunga Mas, one of the tributaries Kedah used to send Siam. Image from Flickr

Once Sultan Abdullah found out, he was naturally angry and wanted Penang back, but Light refused. So he assembled an army, going as far as recruiting pirates as well, to retake Penang in 1790, though we don’t really know why he waited until 1790 to act on it. Except that didn’t work out, because even though EIC couldn’t provide him with military assistance, they still wanted to keep Penang, so they provided Light military assistance instead. The British army in Penang. Image from Wikimedia Commons

To avoid further damages to his own territory, Sultan Abdullah had no choice but to enter a peace treaty with Light in 1791. And this was what the new treaty basically said:

In short, Light retained his control of Penang and Kedah wouldn’t be able to do anything about it. But what was kinda surprising was that… Pretty much. Original image with Imgflip

Yeah, despite the fact that Light made use of EIC’s authority without their consent, they didn’t actually punish him for it. In fact, he got to stay on as the Superintendent of Penang until his death in 1794.

To be fair, though, Light had been shown to have done a pretty good job during his stint in Penang. For example, he cleared out the forests in Penang and made sure the population grew by inviting traders to trade there. He was said to have contributed a lot to ensure that Penang had a good trade growth to sustain itself. And even though he may have shown dishonorable qualities while striking a deal with Sultan Abdullah, he seemed to have shown traits of a benevolent leader when he made sure that the people don’t live in famine and learned the local language to communicate with them.

We’re not saying Light was right or a totally good person – he’s still a colonizer, you guys. But maybe the British didn’t punish him because he was kinda doing a decent job in bringing up Penang from an island with barely any people to a prosperous trading post.

However, right now, some legal experts are saying that Kedah’s cession of Penang to Light wasn’t valid, so they’re arguing that Penang should be returned to Kedah. This is because in the 1800s, Kedah was not a sovereign state but a tributary state of Siam, so Sultan Abdullah technically had no right to hand Penang over to the British. In addition, Light didn’t really honor his agreement with Sultan Abdullah, perhaps making the cession of Penang entirely voidable.

“If the Kedah sultan was not a sovereign, how could he lease something he did not own?” – Legal experts Mohd Hazmi Mohd Rusli & Fareed Mohd Hassan, as quoted from Malaysiakini

For now though, Penang’s apparently still paying RM18,800 of honorarium payment to the Kedah Sultan. However, if there’s ever a discussion of whether Penang should be returned to Kedah entirely, it’s probably wiser to consider what the people of both states think before making a decision.