If you’re a regular Cilisos reader, you’re probably not a stranger to Proton cars showing up in weird places.

You’ve heard of Mahathir’s Proton Perdana being in an abandoned garage for luxury cars in Bristol. You’ve heard of Proton cars being used as taxis in North Korea. You’ve heard of a Proton Saga Iswara being driven through a forest somewhere in the UK. Now prepare yourself for the Proton car that ended up at…

*not the actual North Pole* Gif from Giphy.

Yep, that place where Santa Claus lives and polar bears frolic around. That North Pole. This happened back in 1998, when…

The late 1990s was the time when ‘Malaysia Boleh‘ was serious business: the Jalur Gemilang was put on top of the Everest by M. Magendran and N. Mohanadas in 1997, and it was carried around the world in a solo sailing trip by Azhar Mansor in 1999. Less publicized than these two events was an expedition by 16 Malaysians to the North Pole in 1998. Dubbed as the “North Pole Free Fall Expedition Malaysia 1998“, the event reportedly made Malaysia the first Asian country ever to have organized a trip to the North Pole.

The event seemed to have the patronage of the then Prime Minister Mahathir Mohamad, having been organized by both the Youth and Sports Ministry as well as the Malaysian Parachuting Federation (MPF). Members of the expedition include people associated with the GGK, PASKAU, PASKAL, and VAT69, as well as civilians from the MPF and the Wilayah Sports Parachuting Club. The expedition also included a sole woman on the team, Nordziah Mohamed Noor, who was also a mother of five.

While it may sound like fun and games, it’s actually quite a risky expedition. These 16 Malaysians planned to parachute onto the North Pole, and besides the usual hazards you’d associate with the polar region – temperatures when you exit the airplane can go below 73°C, and wind speeds can go as high as 175 km/h – you could also lose control and land in a deep crevice in the ice or in freezing water. It’s not surprising, then, that according to a blog by a team member, many of them signed up knowing that they might not return alive. To be fair, just skydiving itself is pretty hazardous. Img from memedroid.

So after about two months of extensive training in Malaysia, which included mental training with the Biro Tata Negara and free fall training sessions at Tasik Titiwangsa, the team departed early to Moscow for further training in April before doing the actual jump.

“We will be training at a special landing zone area for free-fallers 80km north-west of Moscow. We will be training for seven days in a row, sometimes performing as many as three jumps a day,” – Abdul Rahim Dahalan, team leader, as reported by NST.

Hold up, you say. When does the Proton car come in? We want our Proton story dammit! Well calm down. We’re getting to that. The sparse reports we’ve found about the expedition didn’t mention Proton at all until the team got to Moscow, which was a little strange. But the car did get parachuted out of a plane, and perhaps surprisingly…

The Proton survived a 600 meter drop and the freezing cold 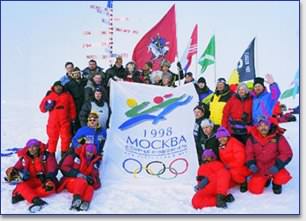 Some of the people who participated in the international event. Img from Tickets of Russia.

Most of what we know about this incident, ironically, came from a Russian website that chronicled the expedition. Through it, we learned that it’s not a solely Malaysian venture – it was part of an international program held under the umbrella of the 1998 World Youth Games, which was held in Moscow that year. Besides Malaysia, skydivers from Russia, France, Portugal, Great Britain, Canada, Holland, Kyrgyzstan, and Ukraine also took part in the expedition.

And it seems that Malaysians were the only ones who packed a car. A few days after the Malaysian team arrived in Moscow, the participants of the expedition were about to move to another town called Khatanga for their final training sessions. As they entered the Zhukovsky Airport on April 16, they saw the Proton Wira arrive. The car and all the participants were later transported by air to Khatanga.

“Near the gate of the airfield we met a military truck with an unusual cargo – it was a platform with the Malaysian car “PROTON” which was ready for parachuting down on the North Pole. The loading took a long time. The Malaysian skydivers were shivering from cold and asking all the time: ‘Will it be as cold over the North Pole as here?’ ” – excerpt from Tickets of Russia.

After several days in Khatanga, it was go time. On April 20, 7 p.m. Moscow time, the skydivers as well as the Proton Wira boarded an IL-76 airplane and departed for the North Pole. It was bright as day, due to the midnight sun, and the conditions were perfect: barely any wind, and only 24°C below zero on the surface. After some final checks, the plane went up to 600 meters, the loading ramp door opened, and the Proton was released onto the ice fields below, supported by three parachutes. 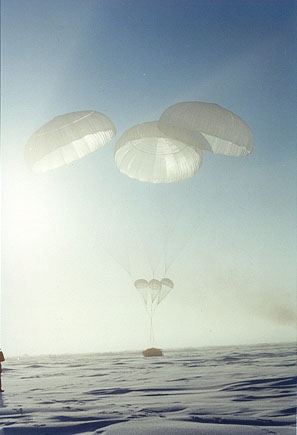 The Proton landing on North Pole ice. Img from Tickets of Russia.

After the car’s smooth landing, the plane climbed higher and released the main group of skydivers at around 2,500 meters. Everybody landed without incident, and they stayed for two hours after that before evacuating. Sometime during that, it was reported that the Malaysian team had managed to start the Proton Wira without problem. Although it was claimed that they managed to drive the car while at a freezing airport near the North Pole (presumbaly in Khatanga) before, they couldn’t drive the car at the North Pole itself due to the thick snow and ‘the snow storm which came soon after their arrival’.

There’s a version of the story where someone said that the car didn’t actually start due to the engine oil freezing solid, meaning that the car had to be pushed around, but we couldn’t find anything to back up this claim. We’d like to think that someone on the team had prepared the car with antifreeze or other measures against cold, since they knew where they’re going, but ultimately we dunno; we weren’t there.

Regardless of which version is correct…

It seems that Malaysians weren’t too impressed by this achievement One of the stamps depicts the North Pole Proton. Img from Malaysia Design Archive.

Earlier, we mentioned that this North Pole expedition happened during the height of the Malaysia Boleh hype. Unfortunately, 1998 was also the year when the economic crisis hit Malaysia. Based on several reports following the event’s aftermath, it seems that Malaysians were largely unimpressed by the stunt, thinking that it’s just a government gimmick to distract people from the economic problems as well as water shortages at the time.

“This doesn’t help us at all. It proves nothing,″ random construction manager John Choy, according to AP News.

“I’m too busy worrying about my own financial problems during these tough times,″ random Malaysian Peter Lee, according to AP News.

Dr Mahathir himself was aware that the expedition might have been inappropriate during an economic crisis, and it made the government seem like it’s taking the economic woes lightly. However, he had defended the expedition then, saying that it’ll bolster our spirit, and that’s what we should do whatever condition the country is in. The expedition was later lumped together as a part of the government’s plan to change the our mindset, so that we know Malaysians are just as good as anyone else.

“‘Malaysia Boleh’ means ‘Malaysia can’. We can do anything if we are willing to do it and are prepared to learn. Malaysians were encouraged to do things that they had never dreamed of doing before. Malaysians were sent to climb Mount Everest. A Malaysian sailed alone around the world, achieving an internationally recognized world record. Malaysians parachuted down on the North Pole together with a Malaysia car, the Proton, which was able to start immediately.” – Excerpt from Mahathir’s speech in Lebanon, 2003.

Regardless of everything, one has to admit that it’s still pretty cool that we’ve dropped a Proton car where Santa lives, just because we could. But what happened to the car after that? Well, it was airlifted back to Khatanga using a helicopter, after which it wasn’t mentioned again. 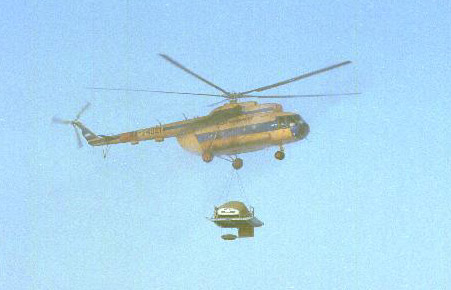 Proton car being carried back to Khatanga. Img from Tickets of Russia.

But apparently the car made it back to Malaysia in one piece. According to a caption on a photo from 2019 on Wikimedia, it was later put on display at Proton’s Center of Excellence in Subang Jaya. Img by Bindydad123, on Wikimedia.

Share this article:
NAH, BACA:
Many Malaysian shops tutup kedai since MCO. We ask 3 owners how they survived