Funny enough, about 10 hours after we published an article about an Oarfish washing ashore in Redang being a sign of an impending earthquake, one actually did happen in Ranau, Sabah. But that’s a separate discussion (which you should totally read. It’s quite freaky).

On the point of the Sabah earthquake itself, it registered a magnitude of 6.0and lasted for about 30 seconds. For comparison, the first quake that hit Nepal in April this year registered a 7.8. But that’s just numbers – exactly how bad was it? Well, we received some pictures that have been circulating around on Whatsapp, so we’re gonna put them side-by-side for comparison: Then how come these pictures aren’t showing up in the news? Instead, we’re getting pictures like these: And this is a HEADLINE picture yeah? Screencapped from The Star.

Well, that’s because that picture in the comparison isn’t from the Sabah quake!

We felt we really needed to address this first, because what’s worse than a lack of information is an overabundance of MIS-information!

We ran the images we received through Google Images, and this is what we found: 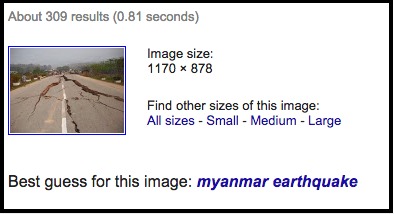 This is the picture we used in the comparison, BTW. 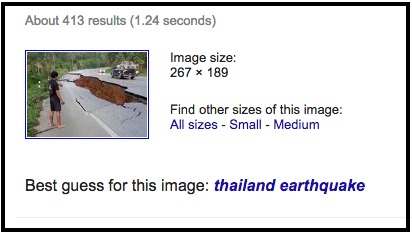 Here’s another one that was sent.

While there were also some pictures such as these that returned no results, the authenticity of these pictures are now put in question because of the koyak ones above. The same goes with “news,” “alerts,” and “updates” from unverified sources… it not only does more harm than good, it also dilutes the actual helpful information out there.

Here’s what VERIFIABLE information we have so far (at the time of writing):

Do note that since rescue and damage assessment efforts are still under way at the time we’re writing this, the numbers may change as new info comes to light.

How bad was the Sabah earthquake actually?

Well, that depends on which measurement scale you’re looking at. Most people might think earthquakes are measured using the Richter Scale, but that’s actually a little outdated as they’re now using the Moment Magnitude Scale, which produces the same results but with more accuracy. For the most part, it doesn’t make too much of a difference to the chart below:

One thing to note is that this logarithmic, complicated science speak to say that for every whole number (ie 5 to 6), the shaking you’d feel on the ground goes up by TEN times. This is also measured in the scale of energy released, in which the energy released during the 6.0 measured in Sabah is about equivalent to the atomic bomb dropped on Hiroshima. Here’s a pretty cool Quake Calculator that allows you to see in practical terms how much energy is released at each point of the scale. Hiroshima, after the dropping of the Atomic bomb. Image from Boston.com

So why isn’t the damage as bad as the atomic bomb being dropped on Hiroshima?

Well, that’s the difference between “Magnitude” (the word you usually see in newspapers) and “Intensity”. Here’s the simple explanation, but you can read more here:

So in this case, what the people in Sabah (or any other quake-affected area) were actually experiencing is the intensity of the quake, which is measured using the Modified Mercalli Intensity Scale, which depends on subjective feedback from those who experienced it, kinda like one of our article polls. You can see what the test looks like here.

In general though, day-to-day activities have been unaffected, with banks and businesses operating as usual. The director of the Malaysian Civil Defense Department in Sabah even stated:

The situation is not as bad as pictured by the social media. What they are doing is making the people to panic, which will only worsen the situation – Colonel Mulliadi Al-Hamdi Ladin, as quoted in Astro Awani

But that being said though…

That header isn’t even meant to be linkbaity. We are lucky in the sense that we’re just out of the Ring of Fire, the name given to the hotspot for earthquakes and volcanic eruptions so we don’t actually experience many earthquakes in the first place: Y’see, Earth’s surface is actually made up of several large broken pieces, called Tectonic plates which are constantly moving. It’s when one of these plates happen to collide or get stuck to one another that we get quakes or volcanic eruptions. You might be surprised to know that these happen all the time, just that many are too minor for us to feel (refer to the magnitude scale table for frequency).

So when we looked up the frequency of earthquakes that originated within each state on Earthquake Track, we found that the northernmost tip of Sabah is still the most earthquake-prone, with 13 earthquakes between 4.0 – 6.0 magnitude over the past 24 years. So what can we do to prevent this from happening?

Nothing. We can’t stop the movement of huge plates on the Earth’s crust from moving.

But what we CAN do is to prepare for it.

While many of us may think that Malaysia is “immune” from earthquakes either because of knowledge about the Ring of Fire or simply because we’ve never experienced one (except the people in Northern Sabah), we aren’t immune from the effects of an earthquake which may happen nearby – the 2004 Tsunami in point. Even though it originated from an earthquake in the Indian Ocean, the massive waves caught many Malaysians unaware, and consequently led to lives being lost. It was only after this incident that the government decided that there was a need for Tsunami warning systems which have since been established. But even then, we have inactive fault lines (weaknesses in the Earth’s surface) to worry about, as well as the fact that most of our buildings aren’t designed to withstand earthquakes. As a matter of fact, a seismology and geophysics expert noted that there has been increased seismic activity in the region and even in the country itself:

“There is a chance of an earthquake. We just do not know how big and where it will hit. … I am not trying to cause panic, but it is a fact. I am not saying Malaysia is active seismically; it is only increasing in activity,” – Che Noorliza Lat, seismology and geophysics expert, as quoted in The Star.

So perhaps the chances of a serious earthquake happening in Malaysia is slim and we’re just overworrying. But in the meantime, we can only hope that the Sabah police are right and no lives were lost in this earthquake.

Share this article:
NAH, BACA:
Europe is banning palm oil? Here's one BIG effort from Malaysia that they might have overlooked...