Over the past weekend, you might have heard that a road in KL got its name changed. In a post on the Federal Territory Ministry‘s official Facebook account, it was announced that Jalan Raja Laut 1 in KL’s Chow Kit area had been officially renamed to Jalan Palestin, as of 26 Sep 2020 (Saturday). The post itself didn’t seem to carry an official statement from the Ministry, but was captioned with text from @zayan.my and Viva Palestina Malaysia.

Based on a media statement posted by Kuala Lumpur City Hall’s (DBKL), the plan for this surfaced sometime in May last year. On the Federal Territory Ministry’s request, DBKL had agreed to name a road in KL as Jalan Palestin, but it took them a while to pick a road and go through the official procedures of changing its name.

“The naming of this Jalan Palestin is a symbol of Malaysia’s support to the struggle of Palestinians against oppression, and ultimately, the establishment of a Palestine country.” – part of DBKL’s statement, translated from their Facebook page.

Judging by the comments on these posts, it would seem that while some took the move well enough, others weren’t so supportive about it. Some of the common themes in comments against the move include the inconvenience it will bring to businesses in the area, the move being something that’s just for show and having no real importance, and apparently, the erasure of a local element in favor of a foreign one. A sampling of disapproval from one of the posts.

We’re focusing on that last one for this article, because apparently some are triggered that the local history of Raja Laut, the namesake of Jalan Raja Laut 1, is being erased in favor of ‘showing support’ to Palestine. Heck, even the current Federal Territory Minister seems displeased with the move. But who is this Raja Laut, anyway? We did some research on him, and we found out that, among other things…

He was credited with establishing the first Malay school in KL

To be quite honest, we’ve never heard of Raja Laut before this whole issue, and the initial impression we had was that ‘Raja Laut’ was some king who conquered the seas of ancient Selangor or something. Or maybe a pirate. To be fair, that assumption is partly from years of reading manga. Img from the One Piece Podcast.

There wasn’t much about him online, either, and most of the articles mentioning him seem to be copied and pasted from one or two sources. So here’s a little poll…

If you picked the first option, hit us up for a chat 😉 But if you picked any of the other options, you should know that ‘Raja Laut’ isn’t some epithet: it’s his actual name. Born in the 1850s, he was the son of the third Sultan of Selangor, Sultan Muhammad Shah. His name, Raja Laut, was apparently due to him being born near the ocean in Lukut, which was roughly around where Port Dickson is today.

Not much is available about his childhood, but apparently Sultan Muhammad passed on when Raja Laut was about 7, and he was adopted by Lukut’s ruler at that time, Raja Jumaat. Raja Jumaat’s son, Raja Bot, became his step-brother, and we’re only mentioning that because of the names. In his 30s (around 1880-ish), Raja Laut was noted as one of the leaders of Kuala Lumpur’s Malay community at that time. The only clear picture we’ve found of him is heavily edited. Img from Friends of IMPAK’s FB.

He became a state councilman, acting as a magistrate and a penghulu (a sort of chief), which were apparently common posts held by members of Selangor’s royalty at that time. Besides coming up with the Kuala Lumpur Sanitary Board in 1890, he was also credited for establishing the first Malay school in Kuala Lumpur, where he sent his son to study. There’s something about him being Chairman of an Agricultural Settlement in Kampung Bahru in 1902 as well, but that’s about all we can find on his accomplishments.

As for his royal affairs, it was a bit troubled…

Although he was once in line for the crown, he never got to be Sultan

Raja Laut’s father, Sultan Muhammad, was credited with enhancing Selangor’s economy by establishing a tin mining factory in Ampang, but he wasn’t seen as a good ruler of Selangor. The people reportedly saw him as unable to keep the lesser sultans and community leaders under his authority in check, and during his time, lesser sultanates within Selangor like Kuala Selangor, Bernam, Lakut and Langat tried to break away.

Still, he ruled for 30-something years, and after his death in 1857, there was a heated debate among the royal staffers on who should rule Selangor. Instead of Raja Laut’s elder brother, who theoretically should have been the crown prince then, the throne went to Sultan Muhammad’s nephew, Sultan Abdul Samad. Sultan Abdul Samad later passed away in 1898, and the throne went to his grandson, who took the title Sultan Sir Alauddin Sulaiman Shah. 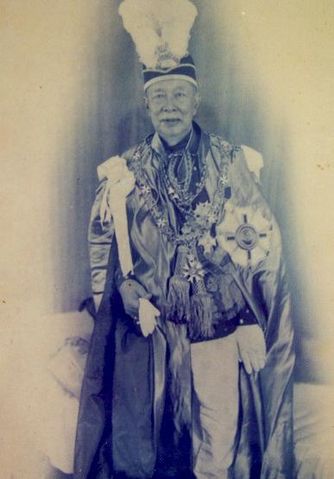 So whatever happened to Raja Laut? For some reason, when Sultan Alauddin ascended the throne, Raja Laut was put next in line to the throne as the Raja Muda, or the crown prince. This decision wasn’t well received by Selangor’s ruling class then, because for one thing, it was a recommendation by the British Residents, and for another thing, Sultan Alauddin already had a son to succeed him, although he was only 6 when all this happened.

Raja Muda Laut’s position was contested right up to his death in 1913, after which his son, Raja Alang, tried to become the next Raja Muda but failed. Eventually, Sultan Alauddin’s son was made Raja Muda, and so ends Raja Laut’s part in Selangor’s succession line. Well, at least he got a road in KL named after him, and although some might say that the recent Jalan Palestin issue is taking that away from him…

[UPDATE: Based on a post on DBKL’s Facebook page, it seems that Jalan Raja Laut 1 includes 150 meters of Jalan Bunus, plus another 300 meters of Lorong Gombak heading north on the map, so the total stretch of road renamed as Jalan Palestin would actually be 450 meters. Some parts of the article have been amended to reflect that.]

It’s kinda understandable how something like changing the road names might tick off a lot of people. It’s kind of a hassle to replace the address on our name cards (we still have like three unopened boxes), and people not familiar with the area will have a delightful time finding a place based on an old address. You might remember the fuss back in 2014 when DBKL announced that they’re changing the names 9 major KL roads to reflect the names of the previous Agongs. However, it seems like this Jalan Palestin thing won’t be that big of a deal.

If you’re a sharp reader, you would have already noticed by now that the road whose name was changed was Jalan Raja Laut 1, not Jalan Raja Laut. As for where that is exactly… well, it’s not exactly on Google Maps. So we had to look very carefully at the photo of the renaming ceremony, take a walk along Jalan Raja Laut using Google Street View, until we found the exact spot where the ceremony took place. *sobs* f-finally… I found it… See original at Google Maps.

The best thing about this? That road isn’t even labelled as Jalan Raja Laut 1. It’s Jalan Bunus for some reason. And it’s relatively short. Like a 1-minute drive short. So yeah, Jalan Raja Laut will probably stay as Jalan Raja Laut for a little while longer, and that 450 meter stretch of road called Jalan Bunus or Raja Laut 1 or whatever it is will now be known as Jalan Palestin.

Share this article:
NAH, BACA:
11 strange ways Malaysians get the PEDAS out of their mouths