In Malaysia, it might be a common thing to see artwork being criminalised in such a way that they are deemed seditious. However, can normal sketches of scenery or architectures be considered as a crime?

Just last week, a group of art enthusiast who call themselves KL Sketch Nation found themselves in an unfavourable position. They joined a fortnight event called ‘sketchwalk’ which was organised along Jalan Bukit Bintang with Lot 10 as their reference point. As they sketched, authorities from Lot 10 reportedly chased them away publicly.

But… why were they chased away?

Those sketchers weren’t allowed to draw Lot 10 due to… intellectual property?

Sketchwalk is an event organised by KL Sketch Nation, a community for urban sketchers. Urban what? Okay, since not all of us are that artsy, urban sketchers are people who practice drawing on locations in towns, villages and cities they live in or travel to. And while they may seem to be uncommon in Malaysia, there is actually a platform for urban sketchers from all around the world called Urban Sketchers.

The purpose of having this platform is to allow sketchers from all over the world to share their drawings online as they believe that their drawings tell the story of their surrounding. And in this case, Hakym, founder of KL Sketch Nation, told us that they have chosen Lot 10 as a reference point to tell the story of the mall like how it is one of the first luxury malls in KL since the 90’s.

“We, KL Sketchnation, always evaluate our fortnightly sketchwalk through the significance of a place within our urban setting in Malaysia. We always keep in mind public places that have interesting stories to tell as part of our goal to highlight the beauty of our city by sketching and discussing about them on weekends.” – Hakym told CILISOS. If their intention was to share information through drawings, then how come they got into trouble? Is it because of the numbers of sketchers? Apparently, not.

Hakym told us that there were only 19 sketchers present during the sketchwalk. Although the number might seem many (enough to make a class), KL Sketch Nation were well informed to not gather in huge groups in a mall since they are considered as private place. So, the sketchers were actually scattered around and along Jalan Bukit Bintang, and they mostly came in different groups at different times.

“Usually only 2-3 friends will clumped up and sketch together but most of the time they chose to move alone.” -Hakym on the amount of sketchers present.

And here’s when the conflict happened.

Despite being in small groups, the authority from Lot 10 chased them away and prevented them from sketching the building of the mall due to… the intellectual property of the building.

“The authority told us that it’s okay to sketch there but don’t sketch the building and its elements such stairs, entrance, logo, signboards etc. They also claimed that the tenants don’t like people to take picture or sketch their setting designs which (I find) absolutely ridiculous.” – Hakym told us. 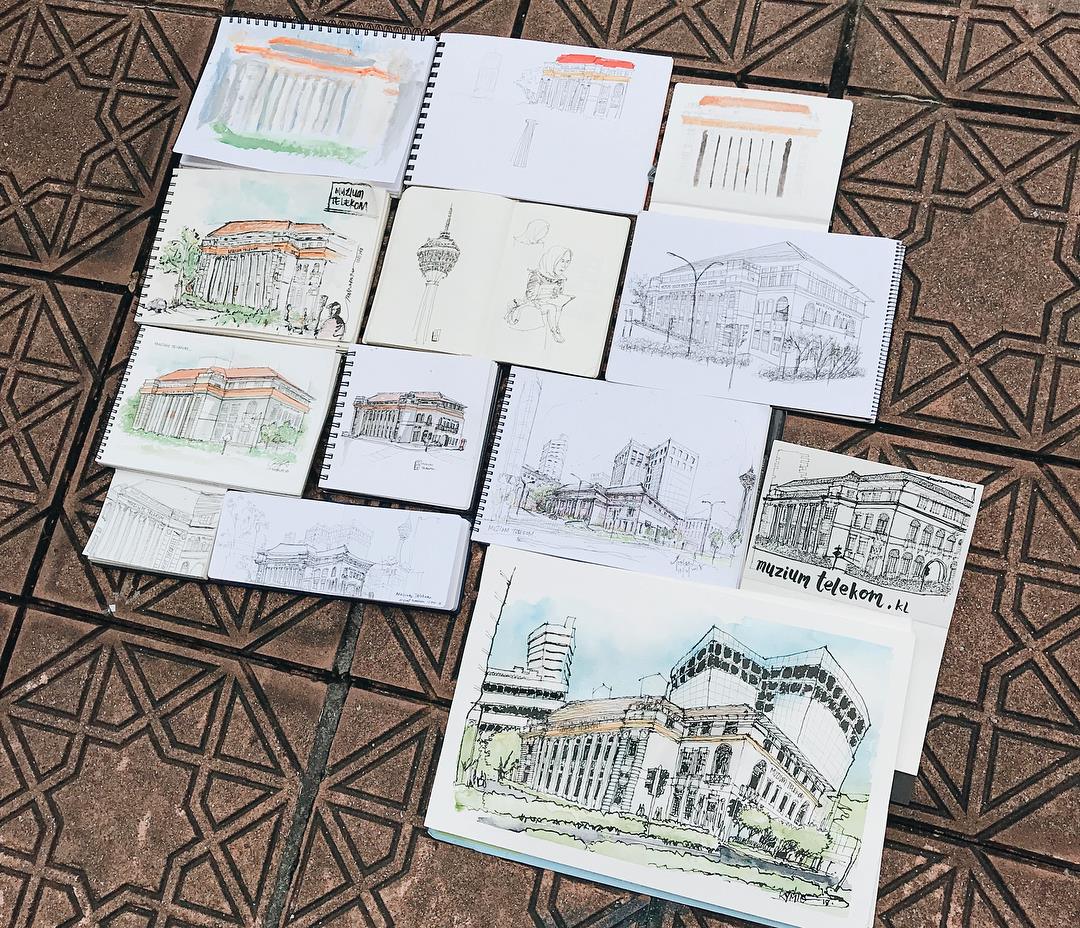 Sadly, this isn’t something new to the sketchers. Hakym told us how there was a time where two of their sketchers were chased away by the auxiliary police at Kasturi Walk of Central Market by claiming that those sketchers needed permits to conduct any activity there. Hakym claimed that that incident caused trauma to those sketchers who had to finish their drawing at their meeting point based on photos which defeats the purpose of urban sketching.

So, if sketches of these features of Lot 10 are not allowed, then pictures shouldn’t be allowed too, right? Surprisingly, Hakym told us quite the contrary…

The authority told Hakym that it is okay for people to take pictures as long as they’re selfies.

Despite that, one of the comment on Hakym’s tweet caught our attention. Apparently, someone else faced a similar incident like those sketchers did but the commentator claimed that she took a picture of the street with Lot 10 in the background. Then, just like those sketchers, she was approached by the guards who had asked her to delete the pictures in her camera. And Lot 10 isn’t the only place where people get reprimanded for taking photos. Two CILISOS staff have had somewhat similar experiences like this.

This writer’s friends experienced being reprimanded at Central Market for taking photos. They had all went there together with their lecturer as part of their course assignment but just because the permits weren’t segregated evenly (means some of them didn’t have it), her friends kena reprimand by the authorities there. Another Cilisos staff was reprimanded by an authority who wasn’t even in his uniform at Pavilion. Two separate places in KL yet the same treatment. Seems rather… odd, doesn’t it?

But how are selfies, photos and sketches different anyway? We contacted a MyIPO officer, Ashaari to help us out with this issue. The Intellectual Property Corporation of Malaysia (MyIPO) is an organisation responsible for the development and management of intellectual property system in Malaysia.

“It depends on the intention of the person who, for instance, takes photo of the building. If they want to profit out of those photos, then it is infringing the intellectual property of the owner of the building.” – Ashaari told us. Translated from BM.

But if we were to talk about profiting from other people’s intellectual property, then wouldn’t it be fair to question souvenir makers as well? Like those KLCC souvenirs you see at souvenir shops. And we’ve been mentioning intellectual property (IP) a lot in this article but what the heck is it anyway? Basically, intellectual property (IP) is anything you create based on the idea you have. And the keyword here is ‘create’ because ideas can’t really be protected unless you turn them into something concrete. So, it could be anything from literature, songs, artworks, designs and symbols.

“And it (Lot 10’s IP) might be related to industrial design of the building.” – Ashaari on the type of IP in this case.

While it might be common to hear words like copyright and patent, there are actually other types of IP than just those. Ashaari helped us break it down for all of us;

And Malaysia has many laws which protect IP and the owner’s rights on his/her creations. But why do we need these rights and law anyway? To put things simple, imagine working hard to create music only to find out that some other people curi your work and get credited for it. Wahliao, super frustrating weyh. That’s probably why you need the law to protect yourself as a creator and your rights besides setting a creator’s work apart from others. 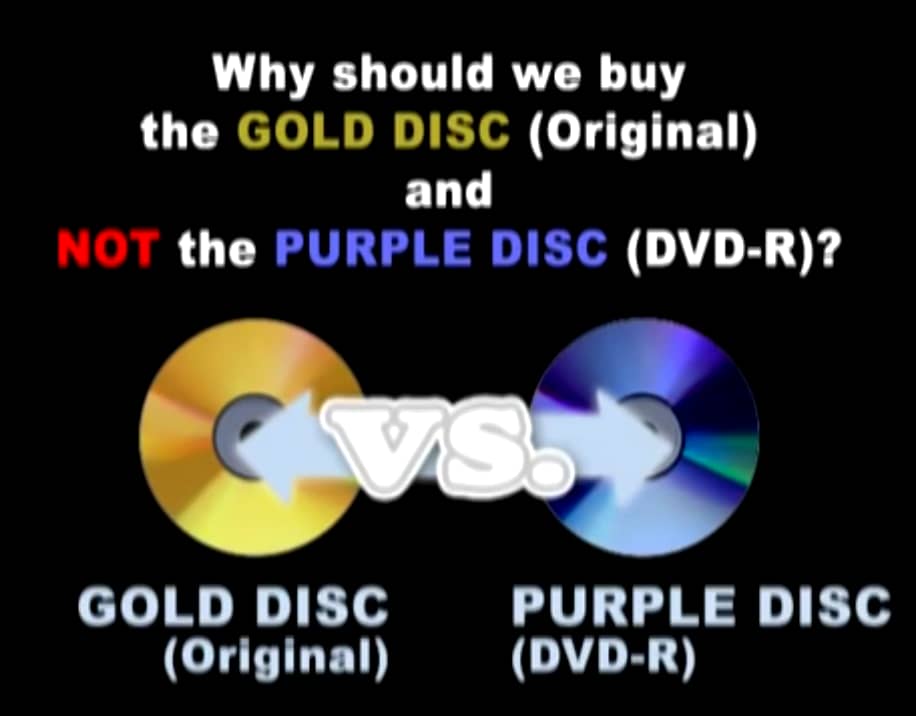 Can you guys hear this PSA? Screengrab from YouTube

Despite not being allowed to take pictures and, in this case, sketch buildings to protect the IP of the buildings (or whatever reasons the authority gave), those sketchers were lucky they didn’t get arrested or fined during the sketchwalk. However, they felt as though they were treated like criminals as they were monitored by the guards while they sketched.

“… It has got the new sketchers afraid to do it (sketch) again because of this incident.” – Hakym told us.

If like that kenot sketch or take photos of buildings anymore issit??

When it comes to IP, Ashaari told us how it truly depends on the owner. Although there are laws that protect the owner’s rights on their IP, MyIPO can only take action against people who curi other people’s IP when the owner make a report about it. Which means, in this case, if Lot 10 doesn’t make a report, MyIPO would not take any action against the sketchers.

“It is 100% the owner’s decision to take actions such as imposing fine or bringing the case to the court.” – Ashaari told CILISOS.

This probably explains why the sketchers were let off the hook although the authority kept monitoring them from a distance.

This is probably how the authority monitored the sketchers. Gif from Tenor

We managed to get in touch with the management of Lot 10 to comment on this issue. When we contacted them, the first thing the personnel asked was if there were any reports made on the incident. Hakym told us he didn’t make any report as the office was closed on the weekends.

Howeverrrr, the management of Lot 10 got in touch with Hakym and issued their apologies on behalf of the authority personnel. Not only that, Lot 10 says that they have plans to collaborate with KL Sketch Nation.

“We are also in conversation to explore how we could possibly work better together in the future. Lot 10 believes in supporting artistic creativity and we really hope we can strike up a fruitful collaboration with KL Sketchnation.” – Lot 10 told CILISOS.

Hmm…. seems…. sketchy? Not sure if PR move la, but we’re all hoping for a happy ending to this story.

Regardless of how this case ends, this incident may have become an eye opener to some on what an IP is, and whether or not you’d be in trouble for drawing an interesting building. The next time anyone thinks of sketching or taking photo of local building, it MAY be wise to actually consider letting the authority of the building know. Or if you find yourself in a situation like KL Sketch Nation, you might want to take it to the management straight ahead.