So recently the Employees Provident Fund (EPF) and Universiti Malaya (UM) came up with a thing called the Panduan Belanjawanku (loosely translated as My Budget Guide), and among other things, it suggests how much money different kinds of people need a month to have a ‘reasonable standard of living‘. In case you haven’t seen it yet, here’s how much money you need to pay for your basic needs, have a social life and generally have some meaning to your existence if you live in the Klang Valley: So let’s say that you give up the thought of having a wife and kids (sorry, ah ma) and take public transport everywhere you go, you would need a minimum of RM1,870 to live like a human in the Klang Valley. It may not seem too bad at first glance, until you realize that the most recent minimum pay in Malaysia is RM1,100, which is a RM50 rise from the previous minimum wage set a few months ago.

From our past article on the matter, we know that about 60% of the companies in Malaysia employ workers on minimum wage, and that about 4.4 million wage earners in Malaysia earn less than Rm2,160 a month. So the number of people earning minimum wage in Malaysia is hella many, and we’re sure that many of them aren’t single and use public transport. Or live in Klang Valley, for that matter. So why is the minimum wage set as RM1,100? Do you reckon that’s enough?

We did a little digging, and apparently setting a minimum wage is a bit more complex than just shouting out random numbers. For starters…

There’s a mathematical formula to calculate minimum wage in Malaysia

No need to panic, we’ve got you covered. Img from Gfycat.

Before we get to the numbers, some basics first. Usually, when people talk about minimum wage, it means basic wages, not including commission, allowances or claims. Any worker in Malaysia, no matter foreign or local, is entitled to a minimum wage once they enter into a contract of service with an employer. This doesn’t apply to domestic workers (cleaners, maids, etc) and apprentices training for more than two years, however. Employers who don’t comply can be fined up to RM10,000 per employee if convicted, so you know it’s serious business.

Anyways, the minimum pay started back in 2012, when the government established a bunch of people called the National Wages Consultative Council (NWCC). These people supposedly do research and suggest the number for the minimum wage to the government roughly once every two years. We couldn’t find out how, specifically, but according to the International Labor Organization (ILO), this is the formula that we use to calculate the minimum wage:

Equation based on ILO.

The FIRST half of that equation (the one within the long rounded brackets) is to calculate the floor wage, which is a base minimum wage that doesn’t take into account external factors like unemployment and inflation. Instead, it averages two things:

The SECOND half adjusts the floor wage to recent conditions by taking into consideration things like changes in the productivity index (P, a measure of how productive workers are per hour of work), the Consumer Price Index (CPI, a measure of how much the price for goods and services have changed), and the Unemployment Rate (UE). And the tiny ‘i’s at the bottom of some things? Well, it used to represent region, as the minimum wage for the Peninsula, Sabah and Labuan, and Sarawak was calculated separately.

So by plugging in data we’ve gathered for 2014, we came up with this…

As you can see, the minimum wages calculated for each region (around RM1,600 to RM1,750) is actually a lot higher than the minimum wage in 2016 (RM1,000 for Peninsular, RM920 for Sabah/Sarawak), but it’s pretty close to what the Pakatan gahmen promised in their manifesto. Anyways, it would seem that the formula only plays a small part in determining the actual minimum wage…

The actual amount is a result of consideration and negotiation 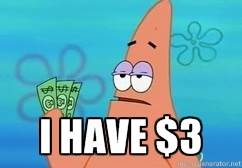 Your future employers, when you say you want RM2,000 as a starting pay. Img from KnowYourMeme.

If you didn’t skip the calculation image above, you might have noticed something strange: despite the PLI and resulting minimum wage in the Peninsula being the lowest, they had the highest actual minimum wage back in 2016. Now why is that?

Well, remember the NWCC from earlier? While their job is to come up with formulas and a set of criteria to guide the government on the best minimum wage amount, at the end of the day it’s up to the government to decide whether to accept the recommendations or to direct them to come up with another one. This is usually done after consulting relevant stakeholders, like employers, for example.

NAH, BACA:
Malaysians were angry at the RM50 salary increase, but they might be forgetting something...

Anyways, in the case of Sabah and Sarawak when the minimum wage was first implemented (2013), while it was found that their PLIs are higher, the average salary among the small and medium enterprises in that state is very low at that time. Employers there had argued that if the minimum pay goes any higher than RM800, they will run the risk of shutting up shop or bankruptcy.

After negotiations, it was decided that the minimum wage for the Peninsula will be RM900, and Sabah and Sarawak’s will be RM800, but on the condition that the states will have to reduce their PLI to match that of the Peninsula over time.

Last year, when the government standardized the minimum wage to RM1,050 for all three regions in Malaysia, several employers in Sabah voiced their disagreement of it, saying that the infrastructure there is not as good as the Peninsula for the pay to be that high. And while the government had pledged to raise the minimum salary for Malaysia to RM1,500 within five years, several obstacles make it seem impossible for now.

One of them was the current situation of the country’s finances, according to Prime Minister Dr Mahathir. Besides the country’s funds being prioritized for debt, he had also said that Malaysia might lose its competitive edge if the minimum wage goes too high.

“But we are in a situation where much of the funds that should be there were used to pay debts — huge debts — and service the interest of the debt. So we cannot increase expenditure. And we have to remember, we are competing with other countries. If the cost goes up too high, we will lose our competitive edge,” – Dr Mahathir, as reported by the Malay Mail.

Looking at the situation from the employers’ side, higher wages can significantly increase a company’s operation costs, and not just in basic wages. EPF contributions, Socso and overtime are all percentages of basic wages, so a rise in basic wages will translate to a rise in these things, too.

Also, naturally if the lowest-paid employees got a raise, it will also mean a raise for other employees near the bottom as well. All these can be a big burden for SMEs, and some had said that too high a minimum wage can drive away foreign investors as well. There are other things to consider, but we won’t be talking about all that here. If you want, you can check out ILO’s guide of the minimum wage issue. Anyhoo, by now you can see that raising the minimum wage, even by a bit, can be a very delicate affair, so it should come as no surprise when some employers considered taking the government to court for raising the minimum pay by RM50 two times in a short period (which they can legally do, btw). So you might be wondering…

Will Malaysia ever raise its minimum pay to RM1,500? Maybe by the time you get married and have two children. Oh wait… Img from Belanjawanku.

For now, it would seem that it’s possible, but not for everyone. Recently, the Human Resources Minister M Kula Segaran had said that the RM1,100 minimum wage is too high for some sectors, following complaints by some employers. Therefore, while the RM1,100 minimum wage is to stay, he had said that the government will look into the possibility of a more realistic minimum wage, but this time based on business sectors after considering the current realities of each of them.

“Based on feedback, the ministry has found that the increase is a steep jump that has triggered a higher cost of operations. We will consider minimum wage based on sectors, for example, set a minimum wage for plantation, hotels and coffeeshops, among others, to be based on a more realistic minimum wage,” – M Kula Segaran, as reported by The Star.

The Malaysian Trades Union Congress (MTUC) had disagreed with the idea, saying that in a unionized environment, the wages are negotiated between unions and employers, and it would not be appropriate for others to determine the wages. J Solomon, MTUC’s secretary general, had said that setting minimum wages based on sectors is not a perfect idea as even establishments in the same sector can have wide gaps in their profit margins. Kedai runcit and hypermarkets are basically the same industry, but their margins probably aren’t the same. Img from Sinar Harian.

Others have suggested that the minimum wage should be determined based on region instead, as the cost of living is different according to where you live. Charles Santiago, Klang MP, had noted that this is the practice in Indonesia.

Datuk Gan Tack Kong, of Perak’s Federation of Malaysian Manufacturers, said that setting minimum wage by region (lower in non-urban areas) can also encourage businesses to move to rural areas as well, expanding the economy of such places.

“We will follow our promise to raise the minimum wage rate to RM1,500. However, this will be over a five-year term, not one-year.” – M Kula Segaran, as reported by the Edge Markets.