In recent news, people have been stealing stuff from shops by stuffing them in bags lined with something that you wrap fish up with before roasting them: aluminium foil.

Here’s their modus operandi: they line their bags with aluminium foil, stuff it with merchandise and walk out of the store without tripping the alarm. These bags are called ‘booster bags‘, with ‘boost’ being a slang term for ‘steal’.

“Previously, shoplifters made the bag on their own. But now the bags are made in Vietnam and you can’t tell that it has been lined with aluminium foil.

We can only detect these shoplifters through their behaviour. That is what our plainclothes store detectives are on the lookout for.” – Kapt (rtd) Adnan Adil Ariffin, Security Manager at Sunway Pyramid for The Star.

The Sunway Malls chief operating officer, Kevin Tan revealed that they already had three such cases this year, and during peak tourist periods, international shoplifting syndicates come from as far as South Africa and targets several malls at once. And they’re not just using bags, either.

“Some line their jackets and jeans pockets with aluminium foil so they can shoplift undetected. So we are even more vigilant,” – Kevin Tan, chief operating officer, Sunway Malls for The Star.

That the sophisticated, high tech theft prevention systems employed by high-end shops can be defeated by a humble strip of aluminium foil may seem unbelievable at first, but we live in an era where we pay road tolls by putting a card on our windshields. Anything should be believable by now.

But before we get to how something used to wrap ikan bakar could fool the alarm system, it would be better to first understand how these anti-theft systems work.

How do anti-theft systems work?

When shopping for new pants, you might have noticed something that looked like this attached to the garment you’re buying: 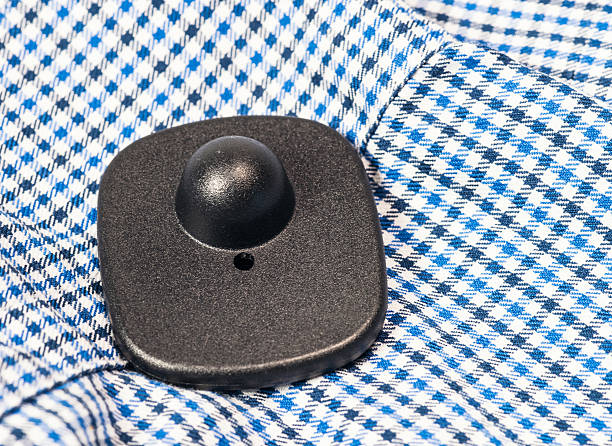 They also come in many shapes and colors. Source

That’s an anti-theft tag, and they work in tandem with a sort of sensor gate. In fact, you’ve probably come across a lot of shops with those gates out  front: What a weird form of decoration. Source

Those are actually antennas, and together with the anti-theft tag they form an Electronic Article Surveillance (EAS) system. Broadly, there are three types of EAS that a shop may choose to use, and they are

While the names of the systems may differ, essentially they all work in the same way. In very simple language, the antennas at the front of the shop continuously emit a radio signal in an area around them when they’re active. The emitted radio signals bounce around people and stuff before they are received by another antenna, sort of like a bat ‘seeing’ things by shrieking and listening for the reflected sound.

When these radio signals bounce off the anti-theft tags from earlier, which contains either metal strips (EMS and AMS) or a small circuit board (RF and RFID), the reflected signal will change and become different. This strange reflection will then be perceived by the antennas, which will activate an alarm. To prevent that from happening after purchase, these tags are either removed or disabled at the cashier, where, depending on the system type, a device will either saturate the tags with magnetism, or burn out the RF circuit.

These systems are not only used in retail but also in other areas, such as libraries and workshops, to keep track of books and tools. Of course, there are differences depending on the system used, and the complete explanation is a lot more technical, but this should be enough to get us to the next point, which is…

The radio signals can be blocked by something like aluminum foil.

How a Faraday cage works. The thin black arrows are current flow. Source

By now you might have thought that hey, if the tags will activate the system if it detects the signals from the antennas, can’t I just cover the tags with my hand or something? If the signals didn’t reach the tags, there would be no alarm, won’t there?

Although it may sound too simple to be true, yes, you can stop the alarm from going off by covering the tags with a conductive material. The aluminum foil bag example in the beginning works because of a concept called ‘electromagnetic shielding‘. In layman terms, if you can get something that conducts electricity (like aluminum foil) and wrap it around something, you’re shielding that thing from electromagnetic radiation, which includes radio waves and microwaves.

The term ‘electromagnetic shields’ are sometimes used interchangeably with Faraday cages or Faraday shields, and perhaps the most relatable example can be found inside the door of microwave ovens. The black film with holes in it prevents the microwaves from getting out and affecting your brain. Source

While it may sound like a recent development, this whole booster bag business isn’t a new thing. People (shoplifters are people too) have thought of blocking the radio signals from the EAS systems by using this concept as far back as 1995, as evidenced by an article in New York Times that described the shoplifters as using “shopping bags lined with metal“. 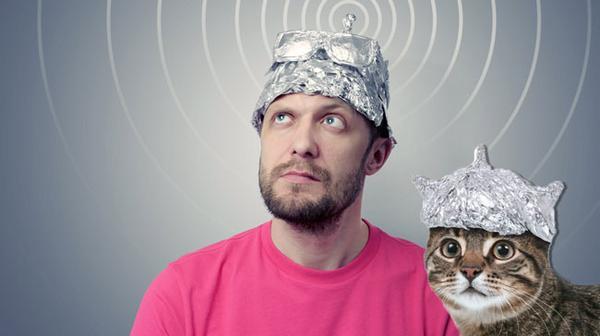 That’s why ‘tin foil hats’ are a thing. (So the gomen can’t read your minds.) Photo from casinogrounds.com

But… but how does one defeat the Faraday cage/shield?

In the past, shoplifters have tried many ways to take off the security tags from the merchandise they’re stealing or tried to disable them in some way, and the Internet is just ripe with suggestions. Some of these methods include using forks, bringing their own magnet, setting the device on fire, and most hilariously, by smashing it to pieces using a hammer.

Of course, the technology to counter these tricks have evolved as well.

For example, there are now tags that are filled with special ink that will seriously stain the merchandise if a shoplifter attempted to take it off, reducing the value of the stolen merch. Some tags may emit an alarm of their own if they’re being tampered with. And some tags, particularly RF tags, are disguised as an innocent clothing label to avoid detection by shoplifters. Not just a barcode label. Source

Booster bags are by no way undefeatable. The most obvious way to counter them is to stop relying fully on the EAS technology and use it in combination with less-futuristic methods, like plain-clothed store detectives, surveillance cameras and anti-theft mirrors. However, just looking out for people carrying suspicious bags got harder in the past few years.

While in the past carrying big bags into a store is a suspicious thing on its own, with the recent no-plastic enforcement in Selangor, carrying your own bag when shopping is no longer a warning sign for the people looking out for potential shoplifters. Even if store security checks the bags of every patron before they enter the store, some booster bags are more well made than others, with the aluminium lining or metal wire cage sown into the bag itself, making detection by sight alone almost impossible.

Some companies saw a solution to this problem in the form of a separate antenna, one that detects booster bags instead. How these antennas work is almost the same as the EAS, except that it detects film-shaped metal alloys on a person when they enter a store. The antenna won’t pick up the alloys in baby strollers and other metal things people wear or carry, as the metal density and shape in these aren’t sufficient to trigger an alarm. When this happens, a silent alert is sent to the storekeepers to warn them of a possible thief.

Shoplifting is a prevalent problem, yet… 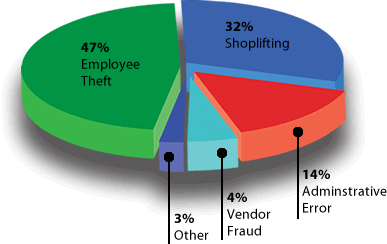 Causes of retail loss, provided by a security provider. Source

Judging by the EAS antennas at the entrance of almost every shop and supermarket today, we do know that shoplifting is a significant problem in Malaysia. However, currently there are no exact statistics available on the matter. Even though there are a number of studies pertaining to employee theft, studies on shoplifting in Malaysia are somewhat harder to come by. These thefts are often the two biggest causes of loss for retail companies.

Federal CID Director Comm Datuk Seri Mohd Bakri Mohd Zinin, in an interview with The Star, had clarified that in their crime statistics, the police do not have a specific category for shoplifting in stores. Shoplifting cases are lumped together with other ‘theft in building’ cases, just like it is grouped together in Section 380 the Penal code, which states that shoplifters may face

The lack of studies may be due to there being more ability on the employer’s side to prevent employees from stealing merchandise and money in comparison with their ability to stop random people coming in and shoplifting. However, an article from 2012 may hint at the severity of shoplifting towards retailers.

Mydin Mohamed Holdings Bhd, owner of the Mydin stores around Malaysia estimated the amount of loss due to shoplifting cases to be between 1-1.5% of its total annual sales. However, the managing director, Datuk Ameer Ali Mydin had stated that the amount had increased from 0.5% from 2010, which is quite a steep increase.

“The losses created by these syndicates can total up to RM30mil a year. Not only is this happening every day, but these people are also getting more aggressive when caught,” – Datuk Ameer Ali Mydin, managing director of Mydin Mohamed Holdings Bhd, for The Star.

On the other hand, the KK Group, owner of the KK Supermarket chain, estimates a loss of RM300 daily. Some retailers have no choice but to pass on this loss to the customers, probably by increasing the prices a little. However, some retailers, like GCH Retail (Malaysia) Sdn Bhd of the Giant hypermarket fame, budget these losses as part of their cost, as their prices are part of their branding strategy.