Here in Malaysia, we’re no strangers to unusual combinations. There’s Deeparaya. There’s Maggi (or basically anything) with cheese. And then there’s nuclear research and farming.

Recently, we stumbled onto a news article from 2014 reporting that Malaysia’s Nuclear Agency (Nuklear Malaysia) won an international award for plant breeding. Now what does a nuclear agency has to do with plants? Well, apparently, they’ve been using nuclear radiation – specifically gamma rays – to make mutant plants.

And it’s not just a strange hobby… Just to be clear, it’s not a purely Malaysian thing, and it’s not something new, either. After WW2, people thought that there must be a better way to use this new atomic energy. One of the ideas that came up was exposing plants to radiation to come up with superpowered versions of them.

As for why radiation, let’s use bananas as an example. For centuries, people have selective bred bananas to come up with better varieties – cross a banana plant that makes big fruits and one that makes sweet fruits, and there’s a chance you’ll get banana plants that make big, sweet fruits.

Radiation breeding is the same thing, but instead of waiting for the perfect banana parents to show up, you expose bananas to radiation and get random results. In a way, it’s like re-rolling the stats on the banana and hoping the banana babies come out with good abilities, like resistance to plant diseases, yellower fruit, or faster fruiting, to name a few. Or… legs. Img from Polygon.

This kind of thing falls under plant mutagenesis, which is when we change the genetic information of plants at the molecular level through things like radiation, chemicals, or even sending them up into space. Essentially, we’re making mutants with superpowers by exposing them to weird things, much like a lot of comic book superheroes. And while it sounds like some fancy-shmancy sci-fi thing…

With a bit of money, anyone can get their plants mutated in Malaysia Okay, maybe not *everyone*. Img from Straits Times.

In Malaysia, mutagenesis isn’t really a new thing: we’ve been researching it since the 1980s to improve our crops. For radiation-based mutagenesis, Nuklear Malaysia had been the leading organization, and like most places, we’re using gamma rays as our choice of radiation instead of X-rays and ion beams.

In 1995, Nuklear Malaysia officially released their first gamma ray mutant: Novaria, a variety of the Grand Nain banana that’s shorter in stature, more productive, and flowers faster. While we can’t find the exact number, since then more than 30 kinds of crop and ornamental plant mutants had been released, either on their own or through collaborations with other agencies. 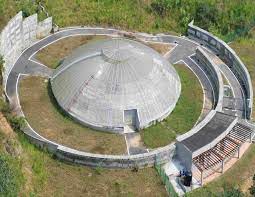 Perhaps the most interesting milestone is the construction of an atomic garden in 1995 – officially called the Gamma Greenhouse (GGH) – in Bangi, Selangor, where Nuklear Malaysia is at. It’s essentially a circular greenhouse 30 meters across with caesium-137 at the center as a source for gamma rays, with plants and tissue samples arranged in rings to bask in the radiation.

This GGH is apparently available for public use, at ‘a nominal fee’. So whether you’re an ornamental plant breeder trying to make exotic variations, a farmer looking to improve your crops, or a mad scientist bent on letting nature fight back, you can try calling them up to find out more. And no, this article isn’t sponsored. We wish.

Finally, to address the question that’s on everyone’s minds…

Wah… such radioactive. Not dangerous meh? Based on people’s reaction to Lynas and the Bukit Merah incident, it’s safe to say that Malaysians are not exactly comfortable with radioactive stuff. And all this talk about gamma rays and atomic gardens changing our food plants may seem like a Freemason plot, but as put by Paige Johnson, a garden historian, not really. Despite thousands of useful mutants already being grown worldwide and making up a sizeable portion of the world’s crops, the method just never became famous with the public.

“It’s easy to look back at it all as some crazy, or conspiratorial, plot. But the atomic gardens weren’t a secret. They’ve just been forgotten. And it’s clear from reading the primary sources that most people involved were deeply sincere. They really thought their efforts would eradicate hunger, end famine, prevent another war.” – Paige Johnson, to Pruned Magazine.

Irradiated plants, at least in Malaysia, don’t become radioactive themselves: gamma radiation have a high enough energy to rearrange the molecules in the genes without affecting the atoms in those molecules, so no radioactivity. In simpler terms, it’s like using a stainless steel spoon to stir rice: the rice grains got moved around, but they don’t become metallic. In case you’re wondering what the inside of GGH looks like. From Nuklear Malaysia.

As for the risks of mutated plants affecting the environment and food safety, it’s hard to say that they will. As one paper puts it, while there had been debates on the matter, most of the time they’re baseless. If anything, the risks (if any) should be worth the possible payouts, i.e. better plants that can possibly survive the changing climate and support the growing global population.

In fact, we can already see some mutant plants making their mark in Malaysia already…

Mutant plants may be the answer to our food woes Those are nuclear rice plants (NMR152), according to the original caption from Selangorkini.

Very recently, Nuclear Malaysia had developed a new strain of rice called NMR152, which is resistant to diseases, able to adapt to droughts and floods, and can produce a whopping 8-10 tonnes per hectare, compared to the average 3-4 tonnes per hectare. This strain saw action among the flood-affected communities in the East Coast earlier this year, and based on reports, it performed quite well.

“Within 100 days of being given the seeds, the affected farmers recovered their economic losses and made profit, in time for the Eid al Fitr holiday.” – Siti A’iasah, Director General of Nuklear Malaysia, in an interview with the IAEA.

Right now, farmers are still testing the waters with this new rice, but if everything goes well, we’ll hopefully have enough rice that we won’t have to import anymore. Who knows what else we can get by randomly blasting plants with gamma rays, but we’re hoping that one day, we’ll have super nasi goreng that can give us superpowers as well.