Namewee recently made the news again after becoming an overnight millionaire when he sold his new single ‘Fragile’ as a non-fungible token (NFT).

But this would be one of the tamest headlines about the guy, since most of us would remember the rapper/film maker for getting in trouble with the government and certain groups that don’t agree with his views. Here’s the thing – we might remember these as being 3 or 4 incidents but, when we actually listed them down, our estimate was wayyyyyyyy off.

So here’s the full list of the times Namewee pissed off the government dan kumpulan-kumpulan yang sewaktu dengannya. 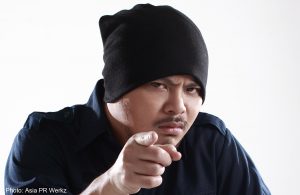 It was in 2007 when Namewee first gained his popularity (or notoriety) for releasing a six-minute rap video, ‘Negarakuku’ on YouTube. Well, it was kinda expected that the song would be controversial because… ‘kuku’ can either mean ‘nail’ or a man’s batang berjuntai.

My dear men of culture, I assume y’all know what it means hehe. Gif from Giphy

Not just that, ‘Negarakuku’ itself was a parody of the national anthem featuring insults in Mandarin and Hokkien. In the song, the rapper mentioned about marginalization, police corruption, and civil service bureaucracy in Malaysia. Namewee also included rude words in the video like “lelai” and “kiong kan” (ask a Hokkien and a Cantonese speaking friend if you’re not sure what they mean)

As expected, the Malaysian Communications and Multimedia Commission (MCMC) took action against Namewee and he ended up being investigated under the colonial-era Sedition Act and the National Anthem Act. The 24-year-old Namewee almost got his Malaysian citizenship revoked for publishing the music video, but no further action was taken after he issued an official apology and removed the song from YouTube.

But just when you thought losing citizenship would motivate someone to be less controversial, he made a comeback in 2009.

It all started with multiple power outages in his hometown of Muar. Worse still, the TNB hotline went unanswered when Namewee tried to reach to the TNB officers and, when he went to the local TNB office and ranted at the TNB officers, he was escorted out by security.

So Namewee went to the recording studio and made a song presenting ‘TNB’ as “Tiu Nia Bu” .

Probably TNB’s reaction when they saw the video. Gif from Giphy

And this time, insulting our national electricity provider got him charged. The High Court issued him a warrant of arrest on August 7, 2014, and Namewee was arrested by police on August 26, 2014. He was charged under Section 509 of the Penal Code with using obscene words on TNB officer Wan Mohd Faizal Wan Hamat, and was offered a choice of punishment – either sentenced to three months in jail or three months of community service, and he chose the latter.

Bonus: You could read this article to know why Namewee got arrested for making fun of TNB but not when he messed with our National Anthem.

The video starts with the “azan” (Muslim call for prayer), a church choir and the ringing of Buddhist meditation gongs as well as Hindu temple bells. You already know where this is going.

The backlash from ‘Oh My God!’ claimed Namewee was defiling a place of worship and basically being disrespectful to the religions that appeared in the video. According to police reports, the music video used the word “Allah” in a disrespectful manner and portrayed Muslims as terrorists. Another report was lodged against Namewee for featuring Penang’s floating mosque in Tanjung Bungah as a backdrop in the video. 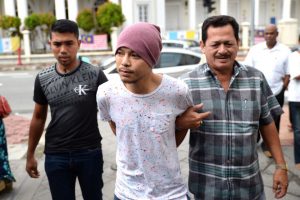 Namewee was investigated under Section 295 of the Penal Code, and was later remanded for four days on August 22, 2016.

The Chinese New Year music video was allegedly containing vulgar dances performed near the Perdana Putra building, which houses the Prime Minister’s Office in Putrajaya. Some citizens were angered by the fact that the dancers wore dog masks while mimicking sexually obscene acts and claimed that the music video had disrespected Malaysia’s religious and cultural norms.

Reports were lodged as music video contained elements that “insulted religion” and could “harm national unity and racial harmony”. The IGP added that the police initiated investigations under Section 298 of the Penal Code and Section 233 of the Communications and Multimedia Act 1998.

He was arrested, for the second time. Namewee was given another 4-day detainment for damaging racial harmony and unity in Malaysia. 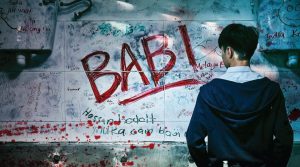 Poster of the ‘Babi’ film. Image from coconuts.co

This is the most recent controversy Namewee got into, and it isn’t music-related. Babi is a movie depicting school violence that allegedly occurred at a secondary school in the southern part of Malaysia in 2000. However, some argued that the non-halal word used in the title contained racist elements that slandered Malaysia’s image.

The producer of the film, Toh Han Boon, also got in trouble – getting charged with unauthorized production and promotion of the film in July 2021.

TLDR: Namewee pissed off the gomen in a total of 11 times.

Just to keep the rest of this article short, here’s a quick list of the rest of his (comparatively) less controversial moments :

Once the movie was being screened, a group calling themselves Pertubuhan Gagasan Rakyat Didahulukan Perak (The Perak People First Alliance Society) protested outside a cinema in Ipoh. They claimed that Nasi Lemak 2.0 was a bad influence on youths.

Namewee slammed the UMNO-owned newspaper for claiming that he had offended the Malays in his Nasi Lemak 2.0 film.

Namewee criticized the government’s double standards against Chinese in one episode of his Tokok Series on YouTube. The Malay rights group Perkasa demanded (again) for the government to strip Namewee’s citizenship.

Banglasia is a comedy that made fun of Malaysian politics, while also portraying the LGBTQ community in a positive light and  accentuating “negative” sociocultural lifestyles. This caused the film to be banned by the MPs and the human-rights activist Sivarasa Rasiah.

In response to his remand due to the controversial ‘Oh My God!’ music video, Namewee published another song called ‘Lokap’ to describe his experience inside the lock-up, which is said to be “crowded” and filled with “stench that cannot be eliminated”.

While getting in serious trouble with the law 11 times is probably 11 times more than we’ve ever experienced, you might be surprised to know that Namewee doesn’t hold the award for Artist Getting in Trouble for His Art... Zunar received NINE sedition charges in a day for his political comics, and Twitter favorite Fahmi Reza was sent to jail for a month for illustrating ex-PM Bossku Najib as a clown.