[Ed’s note: This article was originally published on Sept 24th, 2018. Updated on Oct 3rd, 2018 with our exclusive interview with PASKAL’s director, Adrian Teh.]

We found out from our recent movie survey that only 41.74% of respondents have watched a local movie in the past year. That’s quite a low number, considering the fact that, y’know, we’re Malaysians. So, we decided to try watching a local movie for a change to see exactly how good or bad our local films are. Recently we went to see PASKAL: The Movie at the cinema (courtesy of our friends at GSC Cinemas!) and as it turns out, it was really, really good! In fact, it grossed RM7.5 million after only 4 days!

Furthermore, the film is not just being shown in Malaysia: it’s also being screened at various locations across the world, including China and Turkey! So what’s the movie all about anyway?

It’s been a while since we last heard of modern-day pirates hijacking ships, but it turns out that they may be making a comeback: there were 54 piracy incidents off Somalia’s coast last year, which was double the incidents recorded the previous year! Close enough. Image from: Everyday, No Days Off Gun Blog

It’s a throwback to the  bad ol’ days of 2011, when pirate hijackings were making waves (no pun intended) in the news, but do you remember there was one incident in particular that year which showed the world that we have one of the best special forces units around?

Yes, the opening scene of ‘PASKAL’ depicts Operation Dawn 8, where a group of Somali pirates who hijacked a chemical tanker were thwarted by the Royal Malaysian Navy Special Forces (known as PASKAL)… without any loss of life!

Given the recent resurgence in piracy incidents and the recent release of ‘PASKAL’, we thought it’d be fitting to recount the thrilling story of how our navy commandos absolutely pwned the bad guys back in 2011…

On the 20th of January 2011, a MISC Berhad-rented ship called the MT Bunga Laurel was transporting chemicals worth around RM30 million to Singapore. They were sailing off the Gulf of Aden, a notorious hotspot for pirates cos their kampung Somalia is really close by. 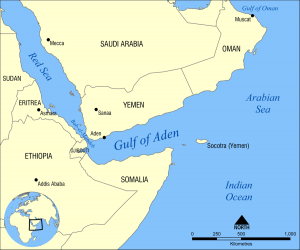 Too close for comfort. Image from: Wikipedia

At the time, the ship was being escorted by a RMN auxiliary ship named Bunga Mas Lima. It was tasked with jaga-ing the ship from pirate attacks. This was supposed to a routine night escort mission and everything seemed ok… for a while.

Once the Bunga Laurel reached the safe zone, the Bunga Mas Lima turned back towards base. This was when the trouble started. The KA Bunga Mas 5. The actual ship was used in the film. Image from: Malaysia Military Power

At around 11:37 pm (Malaysian time) about two hours after the two ships parted ways, MISC received a distress signal from the MT Bunga Laurel. MISC tried to call back, but there was no response.

Exactly 3 minutes later, the Bunga Mas Lima radioed MISC, notifying them that the Bunga Laurel was under attack by pirates, and that there were two enemy ships involved: a ‘mothership’ and a smaller skiff boat which was used to approach the Bunga Laurel.

However, before they could react, 7 of the 18 Somali pirates successfully boarded the ship after randomly opening fire with their small arms for intimidation. They were armed with Ak-47 assault rifles and pistols.

“… we immediately turned back but the captain called us again saying the pirates were already on board and when I heard this my heart sank. We radioed back the captain and asked him to secure the crew in the strong room known as ‘citadel’.” – Cmdr. Mohd Nazri Sharif

And secure themselves they did. The 23 crew members on board activated the Security Alert System, turned off the ship’s lights, shut down the ship’s engines, and hid in the citadel. The pirates then attempted to break down the door of the citadel, to no avail. 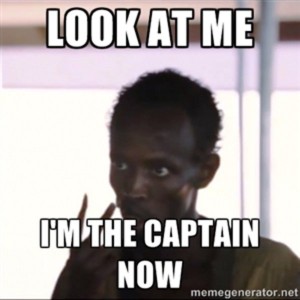 Probably what the pirates were thinking at the time.

Cmdr. Mohd Nazri tried to negotiate with the pirates, but this proved useless as the pirates were uncooperative and could not speak English. However, what the pirates weren’t counting on were the fact that Bunga Mas Lima was carrying a team of [email protected]$$ PASKAL commandos who had been trained specifically for these kinds of situations! Since extended negotiations with pirates could be extremely drawn-out affairs and used only as a last resort option, there was only one course of action to take: storm the ship and take it back by force. Dramatisation of Operation Dawn 8 from the movie ‘PASKAL’. Image from: YouTube

The 14 commandos were split into two teams, led by Lt. Kdr. Mohd Maznan Mohd Said and Lt. Noor Asri Roslan, and were sent out from Bunga Mas Lima in two RHIB boats to retake the ship. Accompanying them for the ride was a Fennec helicopter which would provide recon and supporting fire from the air. Once the two squads had boarded, a firefight ensued between the PASKAL commandos and the pirates. The pirates even tried to take a few pot shots at the Bunga Mas Lima, which was now within firing range of the Bunga Laurel:

“We fired back at the pirates’ mothership when they fired at the Bunga Mas Lima, which was trying to get close to the hijacked ship. The situation then was critical with the pirates returning fire under the cover of darkness.”” – Cmdr. Mohd Nazri Shariff

Adding to the danger were the poor visibility and the lack of safety mechanisms on both ships as Cmdr. Mohd Nazri carefully navigated the ship to approach while avoiding collision:

“It was not easy to get close to the Bunga Laurel vessel in the dark and both vessels had no fenders to avoid colliding… without the fender there will be metal to metal contact and this is very risky.” – Cmdr. Mohd Nazri Shariff

However, it was the Fennec helicopter that proved crucial to the operation, as it not only strafed the ship and provided sniper and machine gun cover, but prevented the pirates’ mothership from providing support by laying down suppressing fire after the mothership tried to approach. Dramatisation from the movie ‘PASKAL’. Image from: RojakDaily

After just mere minutes (!) of being shot at by world-class commandos, a friggin’ attack helicopter, as well as the Bunga Mas Lima itself, the pirates decided enough was enough and threw in the towel. Can’t blame them really, that’s too much firepower even for armoured vehicles, let alone humans. “This ain’t what I signed up for!” Image from: The Star

The PASKAL commandos apprehended the pirates and told the crew to come out of the citadel. Although they were earlier trading gunfire, the commandoes provided the captured pirates with medical treatment, and searched the rest of the ship before sounding the all clear.

All in all, 3 of the 7 pirates captured were injured in the gunfight, while the status of the remaining 11 on the escaped mothership were unknown. But most importantly, all 23 crew members on board emerged unharmed, and NO ONE DIED. Quite an accomplishment considering that the Republic of Korea’s special forces performed a similar operation around the same time and location but ended up killing 8 pirates! It’s no wonder this thrilling story got turned into a movie!

Actually, we got a lot of GOOD local movies… but people dunwanna watch 🙁

If our movies are getting better, why is there still a lack of response from local moviegoers? To get some answers, we actually went ahead and interviewed Adrian Teh, the director of PASKAL! Cilisos writers with Adrian Teh (middle). Yes, we’re jealous of the life-sized Iron Man figure too.

Although PASKAL is his Malay language directorial debut, he isn’t new to the scene: he’s an award-winning director who’s directed and produced numerous films such as Ice Kacang Puppy Love (2010, producer), Balistik (2014, producer) and King of Mahjong (2015, director). Plus, he’s also the Chairman of the Chinese Film Association of Malaysia!

According to Adrian, one of the reasons is that local films generally tend to focus more on being flashy rather than realistic, focusing more on the ‘gaya’ and ‘macho’ aspects rather than on the details. For Adrian personally, he believes in emphasis on realism and detail because he feels the audience can tell the difference.

When asked about some of the challenges faced during the making of PASKAL: The Movie, he said that being a relative unknown and getting everything started were the hardest parts, and once that was done everything fell into place:

“‘Your actors are new, your IP is new, you’re a Chinese director; nobody knows you in the Malay community’… These are actual comments that I heard, but the more you tell me I cannot do it, the more I want to do it!” – Adrian Teh

According to Adrian, it took him 7 months just to meet with the Chief of Navy, and another 2-3 months to get the permission from him to shoot the movie!

However, there were still struggles after the initial proceedings were settled, because filmmaking is no bed of roses. He told us that things like sleepless nights and pressure are a given in the industry, but he was already used to these thanks to his previous experiences in filmmaking.

Adrian had also refused to budge from his RM10 million budget, saying that he believed in his vision and what was required to bring it to life. When asked if he had any advice for budding filmmakers, he said that filmmakers have to be ‘stubborn, trust their script, trust their instincts, and trust the feeling that the story will work’.

But with all these gempak Malaysian movies being made nowadays, how far are we from being an international filmmaking powerhouse? Still pretty far, says Adrian, but we’re getting there. According to him, we need to be able to not just make good films, but good films that sell:

“Define powerhouse: (it means that) our films would be able to travel. We must be able to sell our films… When you talk about ‘powerhouse’, you want the general public to receive your film, to watch your film, to be entertained by your film.” – Adrian Teh

Adrian also highlights the fact that certain genres in local films have over-saturated the market, especially horror and comedy, and there needs to be fresh content to be able to pull the crowd. He adds that he’s not sure if Malaysia can become a powerhouse in filmmaking in the near future, but it would ‘take some balls to do it’. Shooting a scene from PASKAL: The Movie. Scenes shot on the water, such as this one, were the most challenging to shoot, says Adrian. Screencapped from YouTube.

Because it’s an exciting time for Malaysian filmmaking, so don’t wanna miss out! Our films are being well received internationally, so it would be pretty weird if angmohs are enjoying our films more than we are.

And who knows? Maybe in a few years’ time, we could be so-well known internationally that we’d no longer have to explain where Malaysia is on a map to foreigners who only know about Singapore. :p

*Wanna watch PASKAL? Faster catch it in your nearest GSC cinema before it gets taken off. Srsly this film is worth the big-screen viewing experience!*