[UPDATE 21 Nov 2017: We talked to a friend of ours at Universal Music. Turns out, there was a technical error when they uploaded his songs on Spotify. Whoops! They’ve since corrected the error, so now P. Ramlee is longer explicit on Spotify. Hip hip hurray!]

Some time before, one of our friends sent us this screengrab: If you haven’t the slightest idea who P. Ramlee is, you must be new around here. Do like our FB page and subscribe! Anyways, P. Ramlee was an all around entertainer. He had been dubbed as the “Seniman Agung Negara“, and his songs and movies, such as Laksamana Do Re Mi, Ali Baba Bujang Lapok, Musang Berjanggut, and many others, are still being watched by Malaysians up to this very day.

Part of the reason for that is for the unique sense of humor in those movies. The other part is probably due to the movies being family-friendly. So it was quite shocking to think that P. Ramlee may have written some explicit songs back in the day. And we’re not the only one who noticed, either. When we searched for more on this, we found out that some people had already reported the explicit labels for P. Ramlee’s songs ever since last year, and to date they hadn’t gotten any response yet. We created a Spotify account and did a quick count for all P. Ramlee songs considered explicit. Out of the 404 results associated with him, 145 or a third of them have the explicit label, denoted by the tiny ‘E’ before the song’s duration in the browser version. Oh no. Why P. Ramlee? Why?! Screengrabbed from Spotify.

Eh wait a second. We watched “Anakku Sazali“, and it’s basically a sad story of a dad failing to raise his son or something. Some more that’s the song the dad sang his son to sleep with. Had his dad been singing pimp lullabies all this time?

So what’s so explicit about his songs? 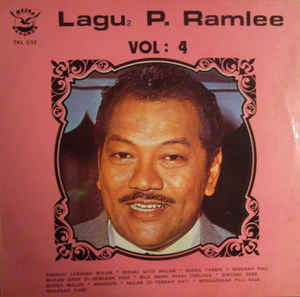 That mustache is explicit! Img from Discogs.

As we know, the ‘explicit’ or ‘parental advisory’ labels are used to signify that the lyrics or music video of a song contains one of several criteria that can offend the sensitivities of some people, or are just plain unsuitable for children. For example, a song or its music video is considered explicit when it contains:

When we #throwback and listen to the explicit P. Ramlee songs, we think we may have found some level of sauciness in the lyrics. Behold, the lyrics of “Malam Bulan Dipagar Bintang” (Moonlit Starry Night or something):

Spoil me like last month’s milk that’s still in the fridge. Lyrics taken from lyricsmode. Terrible translation from us.

Bear in mind that the word ‘asmara’ can mean either love love or love love. Not saucy enough? Here’s the lyrics to another song, called “Tunggu Sekejap” (Wait lah woi): 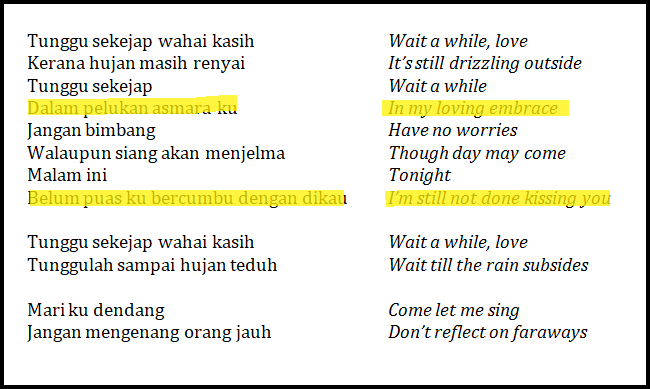 OMG yugais they’re like kissing and embracing with asmara and stuff. If you’re not feeling hot and bothered already, you will be, once you’ve seen the lyrics to “Dendang Perantau” (Traveller’s Song):

We did not just assume dia’s gender. Lyrics from 1liriklagu.com. Translation from us.

Uh, that’s explicit because… um… remembering a possible nude bathing session by a lake while visions of your parents danced through your head? What is going on here? Are these seriously explicit? Well, it turns out that P. Ramlee’s songs may not be explicit at all, since…

NAH, BACA:
This guy on MACC's panel started out his career as... an extra in P. Ramlee's movie?!

Spotify’s ‘explicit’ label isn’t that accurate to begin with We’re not being prudes, but this made P. Ramlee’s lyrics from earlier look like it was written by a celibate monk or something. And this particular song, as well as Sean Kingston’s also suggestive “Dutty Love“, was not marked as explicit by Spotify. No explicit label. Screengrabbed from Spotify.

On the other side of the fence, we found an album by Grant Green from 2003 called “Matador“. All five songs are marked as explicit. All five songs… are jazz instrumentals with no lyrics whatsoever. Unless there’s a way to play guitars suggestively, it may seem that sometimes the labeling may not be all that accurate.

It might be interesting to note that the ‘explicit’ label on the songs posted on Spotify isn’t their own doing. The labeling comes from whoever uploaded those songs to Spotify, and in P. Ramlee’s case the uploader would be Universal Music Malaysia, so we tried asking them about it, but to no avail. We did notice, though, that the explicit P. Ramlee songs come in whole albums, i.e. one album would be all explicit, while another would be all clean. Copies of the same songs may also have different statuses, so this labeling might just be a mistake on the part of the uploader.

Even though he passed away long ago, his art stayed relevant throughout time

Even though we have a lot of artists here in Malaysia, so far none of them can hold a candle to P. Ramlee. His talents were wide: singing, songwriting, acting, scriptwriting, directing and many more that qualified him for an award that never existed before he received it, the “Most Versatile Talent” for the Golden Harvest Award in Tokyo. And it’s no wonder, as the works of P. Ramlee are truly evergreen, and stayed relevant even in today’s modern society. Even though we’ve seen his popular movies countless times, there’s always something that funny about them that keeps us laughing. Even his songs, like ‘Tunggu Sekejap’ and ‘Dendang Perantau’, are still being played today, and still leaves an impact on its listeners.

So for those of you who worried about his songs being labeled ‘explicit’, you can now play them on a loop 24/7 with a clear conscience.