In April this year, Malaysia’s national human rights panel Suhakam was shocked to learn that more than 600 prisoner deaths happened over the last 2 years from 2015-2016. Out of this, 521 deaths happened in prisons, 100 in immigration detention centres, and 12 in police lock ups. And out of that number, 118 were foreigners (workers, refugees and asylum seekers), more than half were from Myanmar.

If 600 prisoners died over the course of 2 years, that’s like one prisoner dying EVERY DAY or every OTHER day. Why is this happening? What is the cause of their deaths? Some people might suspect it has something to do with the police.

Actually, disease is the main cause of these prisoner deaths Specifically in these 2 years alone, the main cause of prisoner deaths was identified as DISEASE, according to Suhakam. What kind of diseases? HIV, cancer, cardiac arrest, blood problems, tuberculosis, and asthma, Home Minister Zahid Hamidi revealed in Parliament.

This is not surprising because prisons are dirty and overcrowded, allowing for infectious, airborne diseases like tuberculosis (TB) to spread faster. TB in particular is on the rise. But the worst one is lock ups because prisoners are only under remand. They’re in and out fast, compared to jail and immigration detention centres, where prisoners are serving their sentence (meaning their stay is longer) elaborated an official from the Health Ministry.

Health officials will examine an inmate within 24 hours of entering prison. If he/she has a disease, officials begin treatment, however it only lasts while the prisoner is in detention. For remand, prisoners are often not in long enough to finish treatment. Based on the Criminal Procedure Code, a person can be remanded up to a maximum of 14 days (depending on the offence), whereas TB could take between 6-9 months to treat. Prisoners usually can’t be located after release and fall off the radar of the Health Ministry.

“These individuals just disappear and they don’t see it necessary to continue their treatment. Looking at it from a psychological point of view, offenders have a different mindset and getting themselves treated is not a priority compared to making a living for themselves.” – said the Health Ministry official on Malay Mail 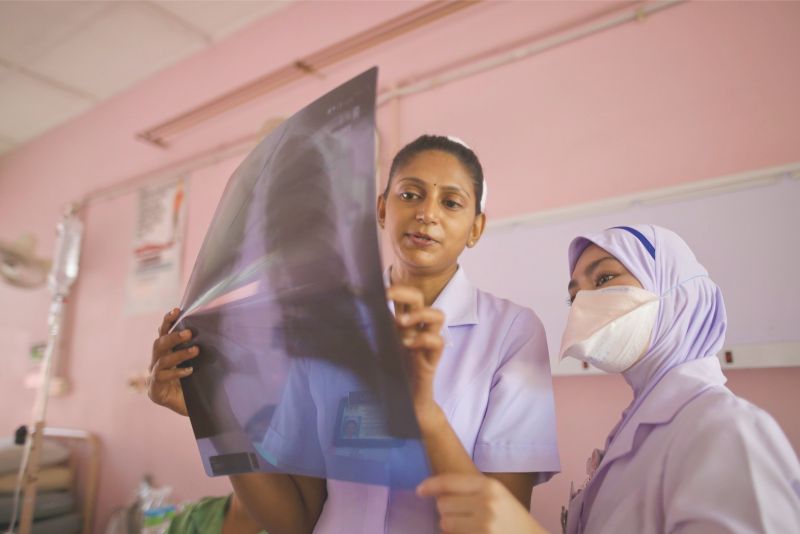 Padang Serai MP N. Surendran who had posed the question on prisoner death by disease to the Home Minister, said the responsibility of the Prisons Department was all the heavier because the inmates are entirely dependent on them for medical care. After all they can’t just walk into a government hospital like people outside.

“Most of these diseases are treatable. They should not have resulted in death if properly managed. The prisoners are entitled to the same standard and quality of medical care as the general population.” – N. Surendran, Padang Serai MP, Free Malaysia Today

Deputy Home Minister Nur Jazlan admitted that due to the limited medical facilities in prisons there was only so much they could do. Currently, prison authorities do have a standard operating procedure to curb TB spread. Normally, inmates with infectious diseases are separated from others. Most prisons have 2 or 3 doctors on duty during office hours and paramedics on call after hours.

But there are other causes of prisoner deaths…

Sometimes, it’s suicide. Or is it? 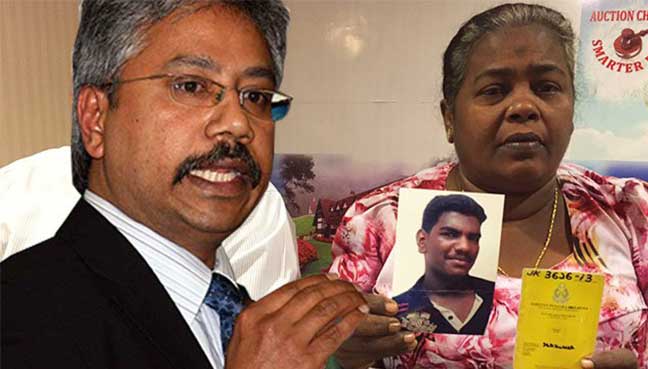 To be honest we couldn’t find much on prison suicides in Malaysia, though according to Suhakam’s report, 30 suicide cases were recorded from 2000 to 2014. The Commission feels that these suicides could have been avoided if they implemented the following changes: put CCTV in the cells to identify who are at risk of self-harm or suicide, so that they can be monitored more closely. Suhakam also recommended that proper autopsies be conducted for suicide cases.

One case was that of 18-year-old S. Hendry, whose dead body was discovered, hanging from the ceiling in his cell, by prison officials on 19 Nov 2005. Prior to that, he had been remanded for 29 DAYS, and at the end of it, he was ordered to be detained for another 60 DAYS! It might have been the stress of detention that drove him to extreme measures, although his case is pretty straightforward compared to this next one…

There is one prison suicide case that’s shrouded in mystery. 20-year-old Shashikumar Selvam had been sentenced to 10 years in prison for stealing rice and 2 cans of sardines. Seems a bit harsh a punishment for small pickings, but we leave it to your judgment.

Shashikumar was placed in an isolation unit on 20 May 2015, for almost an hour, as his statement was taken by Inspector Junizen Jaffri, an officer with the intelligence and investigations unit of Kluang Prison. Two days later, the prisoner was found dead in the isolation unit, allegedly having used his trousers to hang himself. Junizen, who was a witness at the inquest into Shashikumar’s death, said the deceased had told him that he feared for his life! Shashikumar’s lawyer told an inquest there was a cover up of the murder. Click to read FMT’s article

Previously, Shashikumar was found to possess 4.12g of heroin hidden in his rectum, confessing that he got it from an inmate named Singh. He revealed there was a whole drug network going on in jail, with prison officers involved, and asked for his safety to be guaranteed in exchange for a full confession, Junizen said.

“What I know is that Singh is a trusted party by Raja to handle all the buying and selling (of drugs) in the prison, and only the both of them know who are the prison staff involved.” – Shashikumar had told Junizen, Free Malaysia Today

Inspector Junizen testified there was a possibility Shashikumar faced a threat to his life from prison officers involved in the drug racket within the prison. This brings us to the next point…

NAH, BACA:
The gripping story of the prisoners who took over Pudu jail in 1986

Sometimes, inmates are beaten to death by the police “Who? Us? Nawww.” Image from ibtimes.co.uk

Let’s face it, we’ve all seen police brutality happening on TV, whether real or in shows, and here in Malaysia it’s no different. We’re not saying all cops are violent, but there have been many cases where inmates have been beaten up, or worse, killed, in custody. Even Anwar Ibrahim received a black eye in 1998, when then Inspector General of Police (of all cops) slapped, punched and karate-kicked the handcuffed and blindfolded politician.

In February this year, S. Bala Murugan, 44, was arrested by North Klang district police, but his family claims that the arrest was wrongful as he just happened to be in the company of a wanted man. Bala’s lawyer Gerard Lazarus claimed his client was beaten in detention and brought to the court that day.

“When I tried to clean him (Bala) up and asked him to drink some water, he ended up vomiting blood, and the magistrate saw all of this. That was when he (the magistrate) called the investigating officer of the case and asked for Bala to be released or taken to the hospital immediately.” – Gerard Lazarus, Bala’s lawyer, Malay Mail

But the cops allegedly defied court orders to release him and to bring him to a hospital, coz they brought him back to custody instead. Next thing his lawyer knew, he was given news of Bala’s death. A post mortem report has been made, but his family are unhappy with the findings and are trying to get another one done. Balamurugan’s family are unhappy with the post mortem and want another conducted. Image from NST

Another incident that happened in 2013 was quite widely reported in the news. N. Dharmendran, 31, had been arrested on suspicion of attempted murder involving firearms, but on 21 May, he was found dead in his cell. The Enforcement Agency Integrity Commission (EAIC) concluded that he was beaten to death by the cops who were interrogating him…and then they made up evidence to cover up the violent interrogation.

Dharmendran’s death was caused by 52 bruises from blunt force trauma, which caused serious blood loss and hypovolemic shock. Both ears were also stapled while he was still alive!! Last we heard, the 4 cops involved walked free after the High Court acquitted them. Photo of his stapled ears. Image from Malay Mail

Here’s one case of a woman, Samiyati Indrayani Zulkarnain Putra, who died at the Wangsa Maju Police Station in Sep 2006. Her body had bruising, but cause of death was attributed to asthma.

To be fair, we know some prisoners have displayed aggressive behaviour against cops too. Like this fler who hecking BIT OFF A PRISON WARDEN’S EAR!! Well, how else you expect the cops to react to a situation like that? Give him chocolate chip cookies?

Inmates are human too. What can we do to curb prison deaths? 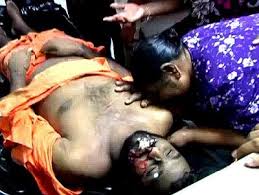 A. Kugan’s family weeping over his body. Image from legalandprudent.blogspot.my

We all might have different opinions of how prisoners should be treated, for example, this retired Court of Appeals judge believes being harsh will do them good:

“Some people commit crimes simply because they want to enjoy the ‘benefits’ available in the prisons. These prisoners do not repent. They know that going to prison means free food and sound sleep. It is not that I want the Prisons Dept to be aggressive or beat up prisoners. The Dept has to make the prison an uncomfortable place so that prisoners regret committing crimes and detest going to prison. For example, a prison cell should have mosquitoes, rats and cockroaches that can be a bother for prisoners.” – Mohd Noor Abdullah, retired Court of Appeals judge, Malay Mail Online

Wahh kesian his kids. On the other hand, Padang Serai MP N. Surendran said we have to treat the issue of deaths in custody very seriously because it involves human life. The treatment of prisoners and the state of the prisons reflects our values as a nation, he argued.

Suhakam, the Commission in charge of monitoring the Prisons Dept concurs and has long proposed reform. One of the things they stress is improving healthcare and quality of care, since disease is the biggest cause of deaths in custody.

“In Malaysia, the number of deaths in police custody is significantly high and this has become a matter of public concern and scrutiny. While the police has the duty and responsibility to maintain peace and order, and to arrest any person who has broken the laws, there is also the duty and responsibility to protect the person detained from any harm whether inflicted by himself or others.” – excerpt from a Suhakam report