Whenever you hear about Petronas, you’ll probably think of their success in the oil and gas industry, the Petronas Twin Towers (thanks, Tun M) and their numerous appearances in patriotic music videos and Hari Raya ads. What you might not have known is that Petronas has had an… uneasy history with the country of Sudan, and that’s putting it lightly. Just this month, it was reported that Petronas’ assets in Sudan have already kena rampas by the new transitional Sudanese government, and there’s even warrant out for Petronas’ country manager. That’s not the craziest thing that’s happened with Petronas in Sudan; there were allegations that Petronas helped fuel the atrocities during the Second Sudanese Civil War back in the late 90s and early 00s. But how, we hear you ask?

Petronas ventured into Sudan because of… oil (duh)

By 1997, the Second Sudanese Civil War had been raging for more than 10 years. The Sudanese government, the Sudan People’s Liberation Army (SPLA) and various other armed groups were fighting for control of the country, but make no mistake – there were no good guys or bad guys in the civil war. Most of Sudan was in absolute chaos from the fighting, with certain areas being calmer than others. One of these areas, Block 5A, was a swampy, flat yet relatively peaceful landscape that was inhabited by the Nuer and Dinka people. Relatively peaceful, that is, until the big oil bois rolled in. 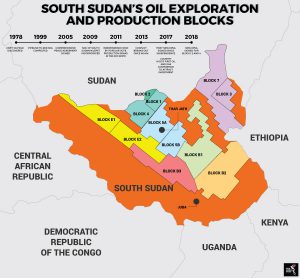 Same year, 1997. The Swedish oil company Lundin Oil AB teamed up with Petronas, OMV (Sudan) Exploration GmbH, from Austria and Sudapet Ltd, a Sudanese state-owned oil company to acquire oil from certain parts of Sudan. Their exploration and production activities were focused in… you guessed it: Block 5A. The previously unassuming area suddenly became important because hey, it’s oil. It’s an invaluable natural resource that also rakes in hella cash.

Once the oil companies set up their operations in the area, Block 5A became a focal point in a war within a war for either party to try to gain control over the oil fields. The locals experienced unimaginable horrors; trapped in the middle of a nightmarish landscape that used to be their home. Corporate uniforms these days look so good. Img from The Last Airbender.

We’re not gonna list all the atrocities committed by both the government and the guerillas here, but here’s a taste of what these people have gone through:

Many little children drowned in the river as they tried to escape the horsemen… The horsemen chased the people to the river and shot at them as they struggled across burdened with young children and the elderly…. There were two young women, Nylaluak Riek and Nyanhialdiu, who were very near term, the horsemen still shot them as they fled. – Rhoda Nyareak Chany, from Wangrial near Nhialdiu, who lost ten of her relatives during attacks on her village in 2001

Senseless massacres, slavery, and torture are scratching the surface when it comes to the long, long list of abuses that happened during the civil war. If your sense of morbid curiosity is especially strong, you can check out Tufts University’s paper here to see what went down.

NAH, BACA:
Why did China tell the Philippines to be more like... MALAYSIA?!

So, how is any of this Petronas’ fault? Well… “The civilian death toll is one of the highest of any war since World War 2.”

True, neither Petronas nor the other oil companies actually started the fighting in Block 5A, but according to Unpaid Debt, a report about the lasting effects of the oil companies presence in Block 5A, the decisions made by the companies in the course of their oil exploration and production activities contributed both directly and indirectly to the violations of human rights in Sudan.

The report goes over what they did (and didn’t do) at length, so let’s check out what they did do first. Accusations thrown at Petronas and gang include: Never thought we’d be pulling this one out again.

…and more. To be fair to the oil companies, a lot of the infrastructure built was probably for their oil production and transportation needs, it’s just that they were also used for very non-oil related things by Sudan’s gomen.

As for what they didn’t do, most of it boils down to “they should’ve actively helped out”, “they should’ve known about the Sudanese gomen’s tendency of committing war crimes” and “it was common knowledge that violent cleansing of oil areas happen all the time”.  Whether those arguments hold water for y’all or not, what’s for sure is that – A) there was an increase of these atrocities since the oil companies began doing their thing in Block 5A; and B) the oil companies benefited in the midst of this insanity.

Here are the war crimes that Petronas truly, madly, deeply did not commit in Sudan. Img from Petronas’ statement in 2010

Despite being called out by European Coalition on Oil in Sudan (ECOS) and other NGOs, the oil companies remain adamant that they haven’t done anything (explicitly) wrong. Petronas released a statement in 2010 basically saying “nah fam”, denying all allegations, calling the accusations “damaging” and “defamatory”, based on “incorrect and biased information”. The other oil companies did more or less the same thing.

In the end, all of this isn’t so much about Petronas or other oil companies – generally, regardless of time or place, there will be some form of conflict when there are resources people want, be it oil, diamonds or even what’s been happening in East Malaysia. Of course, the “easy” way out of this whole fighting for oil thing is for all of us to switch to electric cars, but the electricity that powers said cars… is another resource that’ll be more in demand. Like the wheels of a Tesla, this vicious cycle goes round and round.

This article was totally not brought to you by Elon Musk.