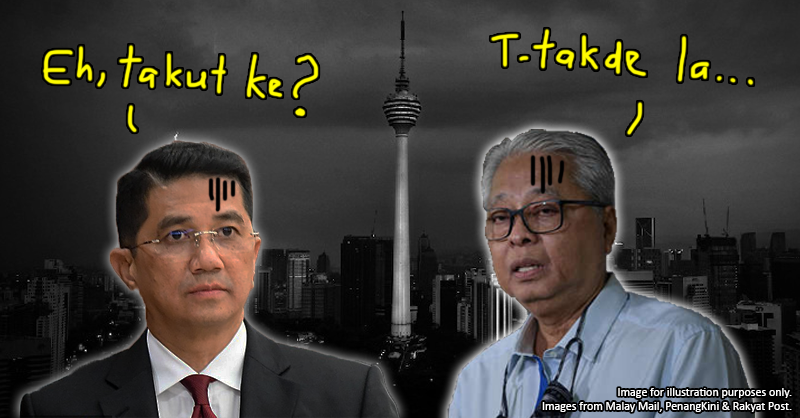 Welcome, ladies and gentlemen, boys and girls, spooks and skeletons. Halloween is upon us again (it’s in 3 days but y’all get it) but this year, we’re not out to frighten you fine folks… unless you’re a politician. That’s right; our Halloween Special tahun ni is dedicated to all the YBs, Datos, Datuk Seris, Tan Sris, Tuns dan lain-lain politicians that have served and are continuing to serve the rakyat. We guess you could call it a tribute to our Malaysian politicians who are, at the end of the day, still human.

By the way, we had a reader competition last year to see who among you could tell us the creepiest story, but this time round, we decided to have a lil competition between the writers instead – so we’d really, REALLY appreciate it if y’all could vote (heh heh) for the story that y’all liked best at the end of the article ♥ So yeah, let’s not waste any more time, we’ve got some reps and Menteris to scare!

The Nightmare Before General Elections. 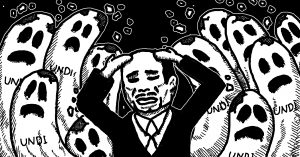 As the curtain rises on another general election, my fellow MPs and I rubbed our hands expectantly.

Another one in the bag, ladies and gentlemen.

We did all we could to ensure the results go in our favor. Handed out cash, doled out gifts to the voters, the works. The poor fools, trading their futures away for a 42-inch flat screen TV.

And the “external help”. Can’t forget that. Flew in a few planefuls of foreigners, entered the names of dead people and idiots who didn’t register to vote into the system, and we were set.

There’s no way we lose this one.

Now, polling is closed, and all there’s left to do now is to wait for the ballots to be counted and added up.

I’m waiting in my ornately decorated home office, constantly refreshing the news app on my phone; sweat dropping down my face.

That’s when I saw my aide from the corner of my eye, hurrying up to me with a look of horror in her eyes. She mouthed the words I never expected nor wanted to hear:

My phone vibrates, begging for my attention. I glance back at it, and my eyes widen. I lost my constituency. A slim margin, but I lost.

The room started spinning. As I pass out, I could only hear bits and pieces of the words that came from the general direction of my aide: 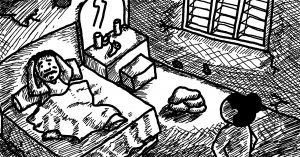 Datuk Seri awoke to the sound of birds singing and the ever-familiar scent of ‘ayam masak merah’ wafting through the air. Datuk Seri let out a contented sigh as his eyes fluttered open to look at the room around him.

But instead of being greeted by the wood paneling of his recently-renovated bedroom, he sat up to find himself on an old and moldy tilam, surrounded by the chipped-painted walls of a townhouse and the buzzing of mosquitoes overhead.

Panicked and confused, he yelled aloud: “EH?? WAS I KIDNAPPED FOR RANSOM??” before frantically looking around the room. But he found that it was just an ordinary townhouse that was like the houses that he was used to visiting during his weekly photo-ops.

This must be a dream. “Never mind, I shall go back to sleep and when I wake up, this whole nightmare will be over,” he thought to himself.

Datuk Seri laid back down on the bed, closing his eyes. But just as he was about to drift back off to sleep, he was startled back awake by the sound of a door slamming open.

“ABANG! You think you don’t have a job?!” a voice shouted.

Datuk Seri scrambled back up and to see his beloved wife standing in the doorway wearing a plain cotton Baju Kurung instead of her usual satin Baju Kebaya.

This couldn’t be right. There’s no way she would wear an outfit that costs less than RM1,000 and wasn’t handmade nor imported. She was a woman of refined tastes, after all…

“That cannot be,” said Datuk Seri. “Our son is studying in Switzerland kan?”

Datuk Seri’s wife shook her head. “Ya Tuhanku. Maybe if you were a Datuk Seri then that could be possible, but you’re not! Now, get up and eat the ayam masak merah I cooked.”

No, this couldn’t be right. This wasn’t his room. He was supposed to be a Datuk Seri, with a luxurious life and a spoiled-rotten wife. His kids were studying in top schools around the globe, for goodness sakes! This can’t be real!

And then he heard it. A small voice that spoke within his head, that whispered to him:

“As punishment for your past sins, you’ve switched lives with someone living in the B40 category. The very same people that you exploited for votes during the elections. And now, you must pay the price. Welcome to your new reality.” 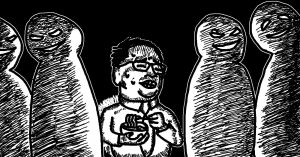 It was a dark and stormy malam Jumaat, and YB was up alone making himself a late night snack: Maggi Asam Laksa. As he inhaled the smell, it reminded him of the time where he was a regular student in the UK, doing regular things with regular childrens of VIPs.

But as he sat down to eat the people’s instant noodles, he just realised a scary detail: Wait, if no one sees me eat Maggi, will they know that I’m just like them? What if they think if I’m just orang kayangan? he thought, as he sat in his humble multi-million ringgit bungalow in an exclusive part of Kuala Lumpur. That realisation chilled him to the bone, and he shivered till his Patek Phillipe rattled on his wrist.

NAH, BACA:
[VIDEO] Oi ANNEH! Why you bringing a lembu into an APARTMENT LIFT!?

Mungkin just upload selfie boleh kot, he thought. He tried to take a few pictures with his iPhone 13 Pro Max, but even technology couldn’t help him – the images came out terrible. He looked left and right, hoping that there was someone still up, but it was already 2 am, and everyone was already asleep.

But he must be seen. Looks like there’s only one choice: black magic.

In a secret room at the back of the house, he placed the Maggi Asam Laksa in front of a mirror and lit some incense and candles. He then stared into the mirror, his face illuminated only by the dim light of the candle, and repeated the magic incantation three times:

He then waited to hear the familiar flash and clicks of the camera, and of reporters jostling to get the best angle, but there was none.

He tried another magical incantation:

Again he waited, and again there were no reporters appearing to take a picture. He took a spoonful of his Maggi – it was cold, and the noodles were soggy. I have been forsaken. The moment has passed.

A tear trickled down his eye. If a politician eats Maggi and no one takes a picture of it, did it really happen?

The curse of the white flag. 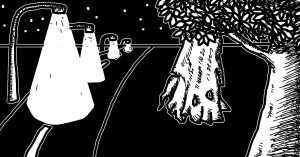 It was a dark and stormy night. Being an important MP, I always come home late after a busy day of making mountains out of molehills and enjoying the boujie lifestyle.

As my assigned driver drove my new- er… the government car through the slums where the peasants live, something caught my eye. It was a dirty white, and the tattered fabric hung ominously by the roadside.

I involuntarily let out a yelp and grasped my aide’s hand, much like how I grasp at any opportunity to comment on recent issues, causing my aide to ask me what’s wrong.

“T-that… that white thing! By the roadside!” I gobbled out.

The driver heard the commotion and slowed down.

“White? Is it a pontianak?” he mused aloud.

I cowered with my head between my knees, much like I did whenever an actual important issue was being debated, and urged my aide to go check it out. He refused at first, but after a stern reminder that I own his opportunistic butt, he cautiously opened the car door and looked around.

After a while, he tapped on the car window, making me jump much like I jumped parties when we formed a new government. I rolled down the window, much like I do when I arrive late for special functions to wave at the sweaty welcome party.

“It seems like it’s just a white flag. Probably a rakyat needing help,” he said, holding up the unholy symbol like it was nothing.

“AIIIIIEEEEEEE!” I screamed, almost as loud as I did when making a racist joke in Parliament. “Get that peasant thing away from me!”

“But shouldn’t we help-” my aide attempted to speak, but I didn’t get this far in my career by letting people finish.

“Nooooo! I’m melting! I’m meltiiiiinnng…” I said, crumpling up in a heap on the car.

My aide shook his head and threw the flag away. We drove on, and I feel like I’m getting a fever from this traumatizing experience. On the plus side, this means that I don’t have to attend my court case tomorrow.

I have no mouthpiece, and I must scream. 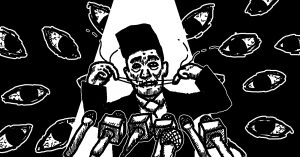 All I wanted was a simple life. A quiet life. Go parliament and come home.

But they. Them. Those… monsters.

They won’t leave me alone. I feel their eyes looking. I can hear their hushed whispers, waiting.

Waiting for the moment I let my guard down. But I won’t. My lips are sealed. A quiet place.

It was just one mistake, and it wasn’t even mine. How would I know what goes on in every department? And now I must bear the curse of responsibility? Of… of… explanation?

I tried to escape, sacrificing everyone who could speak for me.

My aide. Young, fresh faced; eager to learn. She didn’t know. She met them face-on, thinking she could talk sense into them. She was flayed alive on Twitter.

My deputy minister. Brave and ambitious. And foolish. Allowed himself to be addressed in Parliament. They tore him and his script apart, not even listening as he tried to reason with them.

My social media manager. Innocent. Idealistic. Thought an explanation with an image post would ‘fix’ everything. Her finger never left the publish button before she was drowned in a lake of hate comments and gifs.

Now it’s just me, alone, walking out out of Parliament. Sensing their bloodlust, their microphones ready to take the kill, I ran. I could hear their footsteps tailing behind me getting louder and louder as they chased down their story. Knowing I couldn’t outrun them, I fell to my knees and prayed for salvation, for someone else to mess up. A sexist comment. Embezzlement. Children putting up extravagant photos on Instagram. Anything. But falling to my knees was a mistake, it allowed them to catch up to me.

They corner me, strangling my throat for a statement; their red recording eyes staring soullessly, the sound of pens on paper scratching into my soul – and I realize I am alone. There’s no mouthpiece to speak for me. I was beside myself. So I stepped away from the full length mirror, buying myself precious seconds.

“Where are you from, China?”

The words I could say flashed like an encyclopedic blur. I feel the frustration, the anger, the indignation bubble from my core to the back of my tongue, forcing my lips apart.

I have no mouthpiece, and I must scream.

Not to forget: the images for the stories were all done by our very own, very talented Badd!