Just when we thought that the exposed corruption cases of the pre-GE14 era were too many, another one shows up. And this time it involves the Ministry of Defence (Mindef), which was under Hishammuddin Hussein before Mat Sabu took over. Hmm.. this might just be a coincidence. But sadly, it’s not.

First things first, a land swap is a tool that allows the govt to use land that might be useful for the public while getting rid of land with few public benefits. To swap land in Malaysia, a private company builds facilities for the govt such as offices and quarters, and in return, the govt gives ownership of the land to the company. One example of a land swap is the KL River City project. Image from The Edge.

While a land swap is supposedly a win-win for both sides of the deal, not all land swaps have worked in everyone’s favour. Exhibit A: Mindef’s land swaps.

Apart from technical flaws in planning and doing the deals, it turns out that there was allegedly some “political interference from certain quarters” in choosing the land swap locations based on a report from a special investigating committee (the Governance, Procurement and Finance Investigating Committee led by former Auditor-General Tan Sri Ambrin Buang).

Mat Sabu said that the KVSB deal was one of the four deals allegedly made because… “politicians needed to secure their positions“. Yeah, Mindef swapped land and built army bases in 4 areas to move army personnel voters to these areas, so that certain politicians could continue winning their parliamentary seats in the past GEs.

Why does this practice of moving voters to certain constituencies sound familiar? Well, it’s because they’ve done it just before GE14.. Remember the moving of voting areas? It’s called redelineation, which refers to redrawing boundaries of voting areas and redistributing voters to the ruling party’s favour. 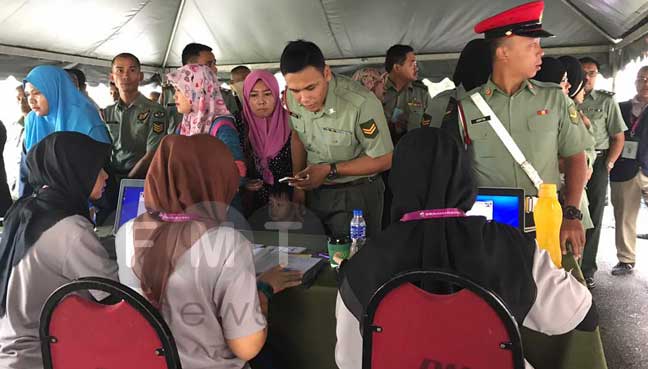 Army personnel and their families voting. Image from FMT.

And before GE14, Bersih 2.0 reported that thousands of army personnel were moved into army camps, which were still being constructed(!), and being registered as postal voters in those areas. To this, Bersih questioned why army personnel who didn’t live in these areas before were being allowed to vote there. And it wasn’t just Bersih who raised this issue.

In April 2018, Rafidah Aziz wrote an open letter claiming that Najib had in late 2007 (when he was the defence minister) proposed to privatise over 40,000 hectares of Mindef land to a 3-person company! On top of that, she told Malaysiakini that there’s a Cabinet paper to support her allegation, which was challenged by Hishammuddin and Najib.

Najib claimed that her allegation was meant to incite and sway military personnel to vote against BN at the GE14. Zahid Hamidi defended Mindef’s past decisions by saying that, another 1 of the 4 deals, Hutan Melintang camp in Perak, was being built because there were some forces in southern Perak with no base.

“There are those who claimed we are building the camp in Hutan Melintang because we want to increase the number of votes for BN, but what they should realise is that the nearest army base to the area is in Sungai Buloh (in Selangor). Other than that, we have the Royal Malaysian Navy base in Lumut, so there is a void in southern Perak and that is why we need a military base in Hutan Melintang.” – said Zahid. Whether these allegations are true or not, there could be one thing of major concern. Would such land swaps involving army bases affect the safety of Malaysia’s army? The answer could be yes. According to Mindef special officer Mohd Nasaie, the Hutan Melintang camp was built without a formal contract between the govt and private sector and had yet to receive a Cert of Completion and Compliance.

NAH, BACA:
Why do Malays still vote for Barisan Nasional? We ask 10 people from different states

In fact, the Paloh and Hutan Melintang camps, which were swapped with camps in Kinrara and Rasah (Negeri Sembilan) respectively, weren’t part of Mindef’s plans under the 11th Malaysia Plan. So, these deals spoiled the formal plans made by Mindef. You see, Mindef planned to build a camp in Port Dickson to replace the Kinrara camp, but this was cancelled and replaced with the Paloh camp.

“It is a similar case with the Hutan Melintang camp in the Bagan Datuk parliament (Zahid Hamidi’s constituency), which was not slated under the Eleventh Malaysia Plan… The main goal of strengthening the army in the west coast of peninsular Malaysia by transferring personnel from Tambun and Kamunting Camps were also cancelled.” – said Nasaie.

So, with all these allegations and findings, the authorities have been urged by relevant parties to look into these deals.

On 21st February 2019, an NGO Pertubuhan Gerakan Martabat Pejuang Negara lodged a police report to urge the authorities to investigate the allegedly lost RM500million for elements of corruption.

At the same time, Mindef has lodged a report with the MACC about the 2 land swaps (Hutan Melintang and Paloh camps) and, just recently, for the remaining 14 land swaps (which Hishamuddin is surprisingly okay with). Mindef also gave the special investigating committee’s report to MACC for the graft agency to go through the report before starting their probe. Nasaie lodging report on behalf of Mindef. Image from StarTV.

Meanwhile, veterans group Persatuan Patriot Kebangsaan (Patriot) gave some recommendations for those in charge to consider.

Patriot president Arshad Raji said he believed that the 16 land swaps were only the “tip of the iceberg“, since 40,000 hectares of military land was privatised, so he called for more such cases to be exposed. Arshad also demanded that Mindef states clearly if cronies were acting as middlemen and whether part of the profits from these deals were used to cover 1MDB’s debts. He also urged the authorities to immediately take action against those involved (including those who have retired)… by freezing the suspects’ bank accounts and banning them from leaving Malaysia, justifying that this would tell the current army personnel and youths to stand up against corruption, especially in military service.

“It is a pity that top brass of the military then did not have the gumption to put their feet down against their political masters. It is a sad reflection of the overall decadence and politics of patronism that has engulfed our nation for decades. It is also a reflection of declining military leadership values that Patriot often mentions.” – Arshad said.

However, despite the groups’ calls for the police to be involved in probes, Mat Sabu said that it’s not necessary for the police to join the probe work since the cases have no police connection, so MACC will handle the whole thing lor.

“My ministry has lodged a report on the case last week and it is up to MACC to handle and investigate the case. As such, the case has no connection with the police thus far and let MACC investigate first.” – said Mat Sabu.

In the mean time, just set your calendar reminder to a year before GE15 to see if there are any land swap deals again. 😉