On Wednesday, 28 March, PM Datuk Seri Najib Razak tabled the Election Commission’s (EC) report on redelineation in Parliament. Discuss, discuss, then it was passed and one day later… the Agong gave his consent and finally it has been gazetted. 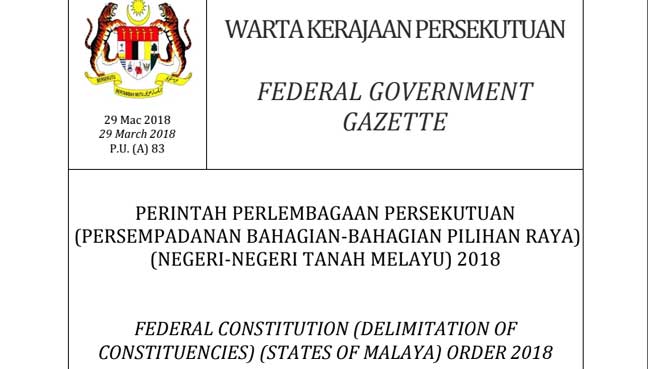 In simple terms, the EC divides Malaysia into 222 Parliamentary seats and 587 State seats. This process of dividing up the geographical areas is called ‘delineation‘. But these lines can be changed once every 8 years. So the process of redrawing boundaries is ‘redelineation‘. *Read our previous article to know more.

Redelineation is meant to create a fairer system, taking into account population growth and movement. True, the number of voters as of 2016 is 11.4 mil, while in 2007 there were 8.3 mil voters – an increase of 36% (3 mil people).

98 out of 165 parliamentary seats had their boundaries redrawn Najib tabling the report in Parliament. Img The Star

The EC said that the huge increase in the number of residents and registered voters in Selangor were among the main reasons for redelineation. In its report, the number of voters had gone up by 51.8% since the last redelineation in 2003.

98 out of 165 parliamentary seats in Peninsular Malaysia will undergo some changes… from minor changes, such as changing the areas’ names using only one vowel (yeah, like the game), eg. from Alor Star to Alor Setar. The 12 newly named parliamentary seats are (old names in bracket):

…to major changes where the boundaries have been redrawn to DOUBLE its original size. Eg. changing Petaling Jaya Utara to Damansara. That would make Damansara seat the biggest constituency in Selangor and Peninsula Malaysia, having 150,439 voters, compared to the 84,456 voters Petaling Jaya Utara previously has. This is about 4x the voters in Sabak Bernam (37,126 voters) which by contrast, will be the smallest in Selangor, and 9x the voters in Putrajaya (17,000). According to analysts from electoral reform pressure groups, Selangor has the most dramatic changes – basically Johor, Selangor and Perak are the most affected, with 19, 18 and 16 parliamentary seats, respectively, seeing changes. Only Perlis and Putrajaya will not see any changes of any sort.

Who won these states that are being changed? The majority areas changed are Pakatan Harapan areas totalling 48 seats, while BN areas come next at 35 seats, and 11 PAS seats. Here’s the breakdown we counted:

That’s just to describe it in brief, but for ALL the changes, check out this chart here: Danesh said Indian voters in Perak could be used to swing the tide, as certain seats have a significant number of Indians. One notable Perak state seat affected by ‘racial re-engineering’ is Tebing Tinggi, currently held by DAP – formerly made up of mostly Chinese voters, it has now become a Malay-majority seat, added Danesh.

In fact, the EC admitted to this racial segregation thingy, saying that “ethnic groups should be kept together”. Huhh?!!? So 1Malaysia can go and fly a kite?

Anyway, nah it’s all summarised in this lil’ video here from The Star:

Malaysiakini created this redelineation checker you can use to see if your place has any changes.

But redelineation can seriously affect the outcome of the Elections

According to electorate analysts, the redelineation exercise could result in very close fights, particularly in Selangor.

If you kept track of previous elections, you might have heard of parties or candidates “winning the popular vote but losing the election“. This is because of the way voters are distributed across the 222 seats. Not all seats have the same number of voters, or the same balance of Opposition to BN supporters.

When you’re delineating an area, you’re basically dividing and redistributing voters. And if you know what you’re doing, you can use that to your advantage. There are 2 common ways delineation can be used to a certain party’s advantage, and they are gerrymandering and malapportionment. WAIT don’t close that tab yet… this video pretty much sums it up (we shot it for BERSIH in 2015).

So gerrymandering is the practice of redrawing boundaries in order to give an advantage over a party. This chart explains how: Malapportionment, on the other hand, is tampering with the ratio of voters to districts. You see, there will be some areas that are more populated than others. For example, Damansara has 150,439 voters and Putrajaya has only 17,000. So that’s a ratio of 9:1. But they each have only ONE seat in Parliament. This means that a voter in Putrajaya is 9 times more influential than a voter in Kapar.

While discrepancies are normal in some countries, due to population size, most countries max out at 4 times difference in voting power, NOT 10 TIMES as shown above. Due to the wildly uneven size of constituencies, it would take more votes to a elect an Opposition MP than a Government one.

Ohh, so will this really affect the outcome of the Elections? Political analysts have different opinions. Some say this redelineation exercise could give BN the advantage. ENGAGE member Wong Chin Huat, who has a doctorate in electoral systems from the University of Essex, gave this example: PKR won Bukit Katil in GE13, but would have lost with the redrawn boundaries. Oh, he’s the guy who revealed the report despite the embargo on it, btw, because it was a matter of public interest.

“I chose to break the law not because I have contempt of the Parliament and the law, but because I think this is something necessary.” – Wong Chin Huat, quoted from The Star 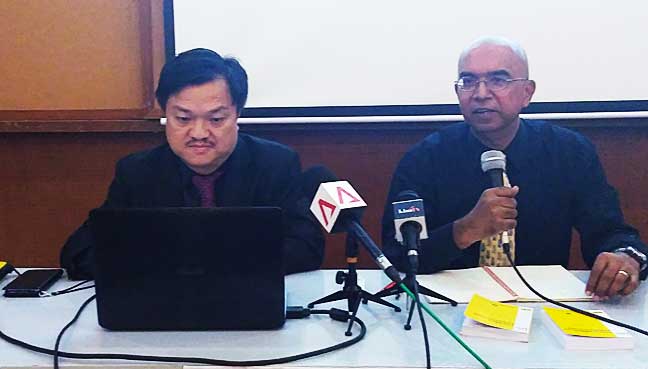 On the other hand, Danesh (from Tindak Malaysia), said that new electoral boundaries do not automatically mean victory for BN as voter preferences are changing all the time.

But the EC denied claims of manipulating the election system to favour certain political parties.

“The EC will not compromise with any quarters that try to sabotage the election process that will take place. The question of the victory or defeat of candidates depends on their efforts to win the hearts of the people.” – Tan Sri Mohd Hashim Abdullah, EC Chairman, The Star Redelineation report tied up with string, these are a few of my favourite things. Img from TMI

But wait, why so few changes in Penang?

As you saw from the chart earlier, Penang had only 2 changes. Chief Minister Lim Guan Eng questioned why the EC excluded them because there were some constituencies that were disproportionate in size and needed correcting, but had been ignored.

“There was no redelineation at all in Penang except for minor changes in Balik Pulau that does not affect voters and Kepala Batas that affects only 100 to 200 voters.” – Guan Eng, Penang CM, Malay Mail Note the difference between Air Putih and Paya Terubong. Avg of 21,694 voters. Chart from newnaratif.com

Malapportionment can be most clearly seen by comparing the largest constituency, Paya Terubong, and the smallest, Air Putih (Guan Eng’s turf). Paya Terubong has 41,707 voters, which is more than 3x the size of Air Putih’s 12,752 voters. Paya Terubong exceeded the average electorate size in Penang (average 21,694 voters) by 92.25%. It’s actually the EC’s job to fix such extremities.

“My voters have reduced despite [an] increase in residents, while in the next constituency, Paya Terubong, it has over 41,000 voters which is disproportionate to my constituency.” – Guan Eng, Malay Mail

Stranger thing is that Air Putih used to have about 14,000 voters before the EC brought it down to 12,752 voters.

Now check out this map. Notice how Air Putih and Paya Terubong are right beside each other? The map shows the constituencies which are excluded from the redelineation exercise. Img from newnaratif.com

On the right, the map shows the levels of malapportionment… as you can see, got all the colours from the chart, right? You can see there are 2 severely over-represented constituencies (dark green) and 5 severely under-represented ones (red). Logically, Paya Terubong should have ceded some of its voters to Air Putih, since the former is excessively large and the latter excessively small, and they are next to each other, it is a straightforward change.

So, it’s odd that Penang has been left out…

Well, it’s passed already, so what can we do?

Back in 2016 and 2017, we wrote articles about redelineation and both times we showed you guys how you can object to it if you don’t agree. Oh.how.naive. Before the report was gazetted with the Agong’s consent, the people of Selangor DID voice their objections. One objection required a minimum of 100 signatures… 30,000 people signed. It was handed over to the EC on 13 Feb, though unfortunately, they threw it out.

So how? Everybody move house lor. The EC moved your area? Then you move back lor

The best thing we can do is make our voice heard during GE14 lor. Especially if you live in the areas that have been redelineated. Whether you choose to vote properly or you believe in undi rosak, make it count.  😉