Growing up, murals were mostly ‘mandatory wall art’ in schools and they were usually themed around anti-dadah, anti-rokok, Wawasan 2020 and the rukun negara… Sure got KL Towers and Twin Towers one. Photo from jqartgallery.blogspot.com

… but it seems like there’s a new wave of artsy, out-of-the-box murals taking Malaysia by storm! Bet you’ve seen these on your TL! Photos from travel2penang.wordpress.com. Click to see more!

While murals have been around for a loooong time (like 32,000 years ago!), it seems like it was Lithuanian artist Ernest Zacharevic’s unique, old-school paintings on our walls that revived this form of art in popular, local times, so much so we’re seeing more and more independent murals popping up here and there. Ipoh, Penang, Kota Kinabalu, KL city, even SS2 PJ…. they’re everywhere!

And these murals are doing so much – they’re booming businesses, they’re reminding us of our heritage, their symbolism make us think, they open up conversations (some intellectual and some not so), they bring us together, heck – they’re even creating jobs for people! But better yet, they’re colouring our country, one wall at a time. 🙂

And there’s a new mural kid on the block! The mural in its work-in-progress stage! Photo by Altimet

Located near Masjid Jamek, this gigantic mural is a massive 175 feet of motifs to celebrate Malaysia’s ‘makers of tomorrow’ – and what we’re capable of (click here for the exact location).

And yes, the prominent orange tinges are part of a subtlenew campaign from TM, entitled #ForTheMakersOfTomorrow – a movement that believes Malaysians have what it takes to make incredible things happen.

NAH, BACA:
Wahh so many Msian police uniforms! How to tell them apart?

And of course, TM believes that many of these incredible things involve an internet connection. And it’s true la k, we’re not just saying it cos this is sponsored. No internet how to become professional DotA player or become internet sensation? No internet how to read CILISOS?!! *tumpang glamour*

And that’s what the campaign wants to do – to inspire everyday peepur like you and me to make stuff with whatever we have….

…. even if it’s about giving murals a silly edge by making super mengada poses with them. Heehee. 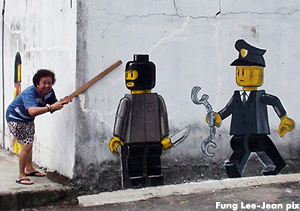 Ah Malaysians… Anything is possible with your creativity la 🙂

Send us your own ‘mengada’ poses with murals!

We’ve got 10 x SanDisk 128GB micro SD cards (worth RM220) to give away to 10 of the funniest poses we receive! There’s also one (1) bonus prize – if your winning entry happens to be taken at TM’s giant mural in Masjid Jamek, you’ll get a Logitech X300 Mobile Wireless Stereo Speaker worth RM276! P/S: If you’re unable to send in your entry using the form below, drop us an email at [email protected]