UPDATE [23 June 2016]: There appears to be a recent diphtheria outbreak, so it’s time to revisit this vaccination topic. According to reports so far, a two-year-old boy from Kedah and a seven-year-old girl from Malacca have died, and a lot more people in close contact with the deceased children have been admitted to the hospital for check-ups.

Diphtheria is an infectious disease caused by bacteria which spreads easily through the air. It mainly infects the throat and upper airways, and produces a toxin affecting other organs. This disease can be contained by administering vaccination.

UPDATE: Yeap, they’re official! There’s an anti-vaccine movement in Kedah acknowledged by the Health Ministry. Many of them reject the vaccines because they’re scared it contains pig DNA. However, the Deputy Health Minister Datuk Seri Dr Hilmi Yahaya announced that they’re starting an awareness campaign to educate parents that most vaccines don’t have pig DNA.

Meanwhile we also have commenters who choose not to vaccinate explaining their views here and on our Facebook. Engagement is off the charts yo! Check out their views.

Remember your BCG in Standard 6? Time for a revisit! We came across this article from The Star about how so many Malaysian parents have stopped vaccinating their kids. Call it urbanite’s disease or whatever but this was a shock to us – hello, it’s 2015 and you’d think more people have access to vaccinations right? But the problem here is not access. It’s choice.

As the trend to vaccinate goes down, down, DOWN, the Malaysian Paediatric Association is afraid the number of kids catching diseases will go up, up, UP. Not to mention in current times, there’s higher risk with the influx of foreign workers from 12 different countries whose vaccination statuses are not known. But the irony of it is…

…it’s the EDUCATED parents who are rejecting vaccines.

So… ‘Educated’, huh? Aren’t we taught vaccines are GOOD for us?

You know how all this while we’ve been taught vaccines are good for us, since they were first introduced to Malaysia in 1958?

Well, the important thing to understand about vaccines is, they are a preventive measure. They don’t kill the viruses. These viruses will still exist in the world. They’re just supposed to make a vaccinated person’s body immune. So if you’re healthy but unvaccinated, and you are in close proximity to someone sick (in the bus, train, in a kindergarten, in a kopitiam), you could catch the disease too.

Take a look at how it’s helped the US over time: Over here we have a list of mandatory jabs in Malaysia called a ‘vaccination schedule’. Other countries also have their own, though the jabs may not necessarily be the same.

CHUP, if this is mandatory, how can parents be skipping the jabs? Won’t go to jail meh? According to the Health Ministry, it’s not enforceable policy and non-vaccinated kids can still go to school.

We know needles are scary but c’mon! Image from infertility.org

Ok, injections were like our childhood nightmares… but are today’s parents soooo traumatised, they decided not to put their own kids through it?

Nolah. Here are the real reasons…

1. They believe it gives kids AUTISM! Rly tho, this is how they sound like. But image fake one yaaa? Original image from IB Times

There’s an anti-vaccine movement, big in the US, that said vaccination causes autism. Apparently some guy named Andrew Wakefield did a study to ‘prove’ it, but the study was found to be FAKE by The Sunday Times, and was then retracted. However, the damage had already been done, and worldwide vaccination rates dropped 🙁

Aiyo, and it seems to be catching on in Malaysia, gaining traction in our country around 2012 (partly due to social media). To the point where 114 government, private and university paediatricians released a statement pleading with parents to stop believing the anti-vaccine cause. WALAO 114!! When have we ever seen the gomen and private sector so united? In fact, all around the world, doctors, medical experts, and health organisations advocate vaccination.

One mother, Erina Law told The Malay Mail Online that she stopped bringing her kids to doctors after her son developed autism. Now the family visits a homeopathy practitioner instead. Like Erina, many Malaysians parents are looking to homeopathic and traditional remedies, and they believe those cannot be mixed with modern medicine like vaccination, according to The Star.

Erina added that even with vaccination, people still contract diseases, so she believes it doesn’t work. OK, it CAN happen for a number of reasons – maybe your body didn’t develop full immunity after vaccination, or maybe you didn’t get all the doses for full effectiveness. Check back your health records to find out lah. But let’s not forget that smallpox was successfully eradicated in 1980.

Again, this whole vaccination-autism thingy has been scientifically proven to be a bunch of BOLLOCKS! In the end, The Lancet, a publication which published the ‘study’, retracted it!

So NO, it does NOT give kids autism.

2. They also believe it has BAD side-effects We cannot deny there have been horror stories. Bessie (not her real name) vaccinated her eldest child with no drama. Her experience with her second child however, was terrible:

“She was vaccinated in the morning and the swelling and discomfort started not long after and the following night. She cried persistently for 3 hours and gave one very loud, high-pitched scream.” – Bessie told The Star

Her baby later had brain inflammation, behavioural change and loss of eye-contact and speech delay. BUTTT, she did not die. Another parent Dan, had the same ‘weird’ high-pitched scream incident when he vaccinated his twins.

Who could blame them? It’s enough to scare any parent! But while vaccination can have side-effects, MOST of the time, they’re mild and they disappear within 1-2 days: 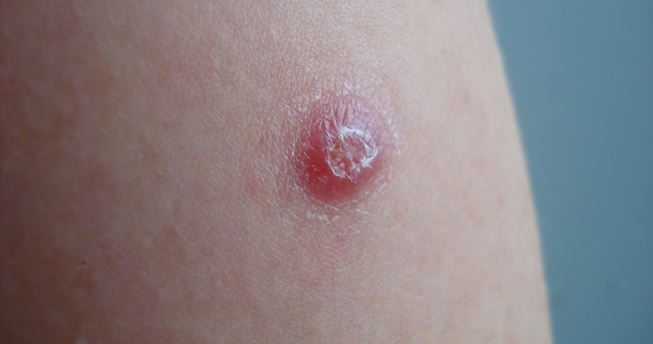 The mark can look like this for weeks. Keep calm and DON’T SCRATCH. Image from thetraveldoctor.com.au

The more severe side-effects would be anaphylactic shock (an allergic reaction that can be fatal), Acute Disseminated Encepha­lomyelitis (ADEM. An inflammation of the brain and spinal cord), or DEATH. But according to WHO, these are extremely RARE.

In Malaysia, there were 102 reports of ‘Adverse Events Following Immunisation’ (AEFI) out of 4.1 million vaccination doses given to children in 2014. That’s only 0.000025%. You have a higher chance of falling down the stairs, but you don’t use rock climbing harness oso. MORE reassuringly:

Don’t get us wrong, we don’t mean to downplay the side-effects that can cause death. That’s why at the very first sign of any weird symptoms after vaccination, parents should quickly consult their paediatrician and notify the National Pharmaceutical Control Bureau.

Ya, this issue again. Haiz. Marwan Shukriman, a dad who decided not to vaccinate his child said they were obtained from non-halal sources such as pig stomachs, monkey hearts and other animal parts. Yuck, sounds more like traditional medicine to us!

We looked to verify this and found some vaccines contain pig gelatine as a stabiliser. Here’s an interesting fact – viruses are grown in labs on animal cell-lines because they can only grow in human or animal cells! Muslim leaders have ruled it does not break religious dietary laws because it’s highly purified and injected, rather than ingested. Then in 2001, WHO consulted 100 Muslim scholars who unanimously agreed it was acceptable.

We also checked to see how other Muslim countries handled vaccination. In Saudi Arabia, they do vaccinate and what’s more their coverage more comprehensive than ours. They have rotavirus and pneumococcal conjugate (PVC) jabs, whereas in Malaysia it’s optional. In the UAE, they also mandate PVC and chickenpox, but we don’t enforce chickenpox jabs here.

Back in Malaysia, Penang Health Exco Dr. Afif Bahardin reassured Muslims that the vaccines are halal and fatwas have decreed it. Not all vaccines got fatwa though. But for those who are still not convinced, there’s good news! Malaysia is working with Saudi Arabia to provide halal vaccines in 2 years.

4. Others just reckon it’s safe cos other people’s kids are vaccinated adi

So if everyone is vaccinated, the disease can pupus altogether. Image from vaccines.gov

“This is like riding in a car pool where everyone contributes each month to pay for gas, repairs to the car, etc.; and one morning a new guy shows up and says, “I think I’ll ride along with you. But I’m not going to pay, since you’re going downtown anyway and you have an empty seat.” If enough people choose to take a free ride on other children’s immunity, herd immunity will soon disappear.” – Centre for Disease Control

BUT.it.doesn’t.last.forever. If more and more people take a ‘free ride’ on other children’s immunity, herd immunity WILL disappear. The worst thing is, parents don’t know the danger…

“Most modern parents have never seen the devastating effects that diseases like polio, measles, or whooping cough (pertussis) can have on a family or community. It’s easy to think of them as diseases that only existed in the past when the bitter truth is, they still exist.” – Dr. Kamal Amzan on mmgazette.com

And NOW more than ever there is a concern of breaking the herd immunity chain in Malaysia because of 2 reasons: LESS kids getting vaccinated and there are MORE foreign workers from countries where immunisation rates are low. We made a chart to explain what will happen… 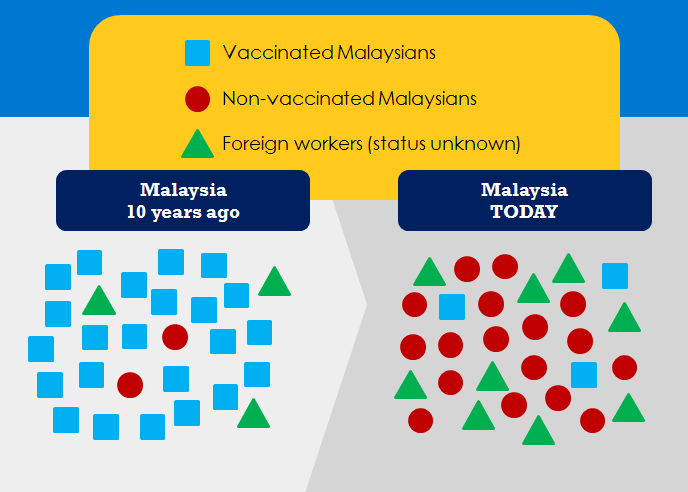 So more people can catch diseases

Not that these are actual figures today in Malaysia, so don’t panic. We merely wanted to illustrate how the landscape would look if EVERYONE rejects vaccination.

At the same time, there are parents who are simply against capitalism (they believe it’s all a conspiracy by bad, evil corporations to make $$ selling vaccines). Or they’re pro-choice (other people have no business telling me what to do with my kids). But do you really wanna risk your child getting a FATAL disease just to prove a point?!

In Malaysia, there was a case of an 8-month-old baby who had 250ml of fluid drained from his chest and was warded in the ICU because his parents refused the pneumococcal conjugate vaccine (PCV). “The hospital bill was 18 times the cost of the total course of the vaccine,” said Datuk Dr. Zulkifli Ismail, the Subcommittee Chairman for immunisation at the Malaysian Paediatric Association.

Nobody wants to gamble with the lives of their children. But at the end of the day, the pros greatly outweigh the cons, so it is the better bet. 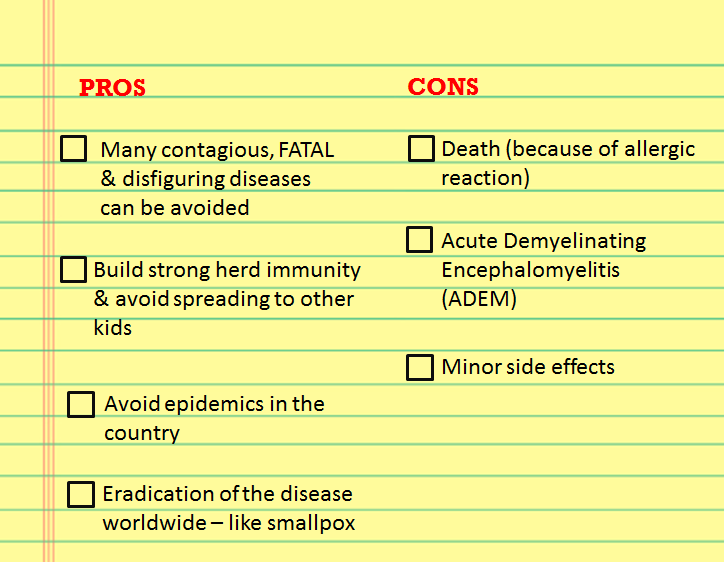 And as mentioned, the odds of severe side-effects happening like death have been recorded as extremely rare.

NOTHING in this world is absolutely safe. Driving, crossing the street, walking down the stairs…heck, you could die from eating kangkung!

The story of how vaccination came about is one of RISK… In 1718, Lady Mary Wortley Montagu (wife of British ambassador to Constanti­nople), inoculated her 2 children against smallpox based on the Turkish Uthmaniah (Ottoman) process. Historically, inoculation had been practiced by the Turkish and Chinese long before Westerners made it widespread. Sure some people of her time trashed her for being a ‘bad’ mother. But thanks to her, her OWN children, and today billions of children around the world are saved.

And those who argue it’s their personal choice…is an individual’s choice more important than public interest, especially when it comes to public health? As Dr. Shaikh Mohd, Senior Fellow at Ikim’s Centre for Science and Environment Studies said, we cannot let ourselves be so blinded by conspiracy theories until we forget the decades of established scientific facts.

“Anti-vaccina­tion parents risk the return of these diseases, causing big problems to not just the health authority but to the community and nation.” – Dr. Shaikh Mohd on The Star C’mon ugaiz: think of the keedz. Share this with the parents you know!