The mythical strength of Hercules.  The legendary adventures of Sun Wukong. The blood sucking tales of Nosferatu. We all love a good myth, whether it’s heroic demigods or huge monsters, which is perhaps why they’ve captivated both our ancestors as well as us modern people.

One such myth that’s grabbed our attention since the sixth century until now is the Loch Ness Monster. The supposed giant in a Scottish lake, it’s generated countless expeditions to find Nessie, as well as inspired numerous books, films and TV episodes over the years. But did you know that Malaysia has had it’s own version of the Loch Ness Monster for quite some time too? The classic Loch Ness Monster on the left, and the Seri Gumum Dragon on the right. Images from Lagenda Melayu and Independent

The dragon was a result of a pissed off old lady

So in searching up info regarding the legend of the Seri Gumum Dragon, we found articles by Journey Malaysia and The Kerinting regarding the origin myth. In it, it says that the story originates from the Jakun Orang Asli folk who live in the area of Tasik Chini, Pahang. Tasik Chini way back when. Image from SE Elements

According to the tale, before ‘modern civilisation’ came about, the Jakun people were out and about farming on some land, when suddenly an old lady appeared. She told off the men who were there, saying that the land belonged to her and that they were trespassing. The old lady then stuck her walking stick into the ground and warned them to never remove it. The men began apologising and in response the old lady was like okay fine you can continue for now.

Later on, one of the men saw a dog barking at some old log. Curious as to why the dog was barking at it, he threw a stick at the log and the log started to BLEED!

If you know this reference we’re sorry you had to watch it.

He called on his fellow tribesmen for help, and they all started throwing their sticks at the log. Suddenly, the sky darkened and a thunderstorm erupted. Panicked and confused, the tribesmen ran off, and one of them accidentally knocked over that walking stick planted by the old day. Water then started gushing out of the hole in the ground, filling up the area and forming Tasik Chini and the surrounding lakes, as well as becoming home to the Naga Seri Gumum, said to be the spirit of the log in the story.

Over the years, just like the Loch Ness, there’s also been a number of alleged sightings of the Seri Gumum Dragon. One such case for example involved a tour boat driver who quit his job after sighting it in the 1980s.

“It was the first time I saw the creature, which was as thick as a drum barrel. I immediately quit my job as a boat driver and I’ve never gone down there since.

I try avoiding the topic altogether too whenever anyone asks me to talk about it. It wasn’t a good memory…, ” – Mohd Razali M Baki, former boat driver and Kg Felda Chini resident, as quoted by Berita Harian The story of Tasik Chini’s dragon has definitely been around for some time too, judging from how in 1966, there was a black and white Malay film made about it. Titled ‘Naga Tasek Chini’, it was kinda like predecessor of Jaws, with a love story, some drama, and only a few scenes featuring the actual monster in the title. Oh, and just in case you’re wondering what 1960s CGI in the Malay film industry looked like, here’s the scene with the dragon from the movie:

Look the CGI wasn’t the best in 1966 but it’s not that bad laa k. GIF from Naga Tasek Chini

These days tho, the dragon’s ‘home’ is in trouble of drying up

We’ve covered the dragon, but what about it’s lair?

Tasik Chini itself is pretty interesting itself too ya know; among the tales surrounding the lake is that deep below its waters lies the remains of an ancient city that was part of the Khmer kingdom. It’s said that in the 80s, a group of researchers from West Asia even came by to investigate the possibilities of ancient pyramids at the bottom of the lake. Another story about the lake is that there’s gold to be found in Tasik Chini, but you can’t get it because it’s guarded by a mysterious buffalo. The pyramids of Cambodia. Could such a pyramid exist at the bottom of Tasik Chini? Image from Ancient Origins

Sadly, despite its historical and cultural significance, Tasik Chini might be on its deathbed. News articles about the lake’s decline have been going on since 2011, and it was also reported earlier this year that the Tasik Chini Research Center estimates the lake to be completely dried up by 2030 if no action is taken to conserve it.

“Look at the water that’s getting murkier. If not taken care of and continues to be polluted, even the dragon won’t want to appear. It’s not impossible that the lake, once an inspiration to the Malay film industry, dries up by 2030,” – Prof Datuk Seri Dr Mushridah Idris, Head of the Tasik Chini Research Center, as quoted by Berita Harian

The culprit behind the damage to Tasik Chini? Mining. 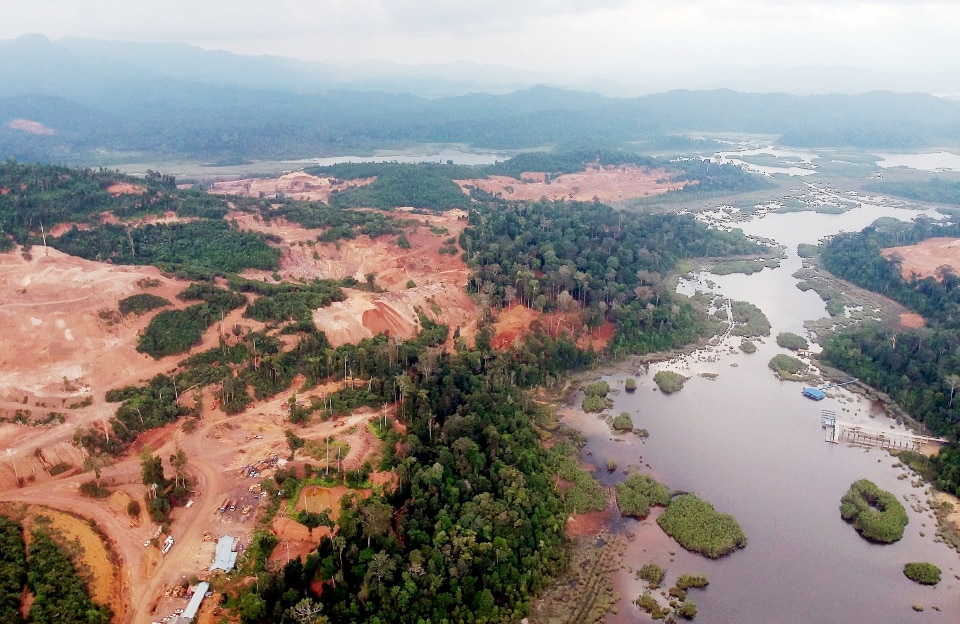 Tasik Chini and the surrounding areas. Image from SE Elements

Around the same time as the Prof’s comments was the report that there were a number of illegal mines operating near the lake without meeting environmental standards. These illegal miners didn’t even have the permits to mine, but would simply go into licensed mining spots and dig. There’s also a lack of buffer zones between the license mining zones and the surrounding areas, which may have prevented the levels of pollution seen if it was in place.

Thankfully tho, there does seem so be some action in place to save Tasik Chini.

Tasik Chini has just been gazetted as a permanent forest reserve

Following public outcry as well as some pushing from NGOs, the Pahang State government would go on to gazette roughly 4,900 hectares in the Tasik Chini area as a permanent forest reserve in April. This is also in line with the site having been declared a biosphere reserve by the UNESCO back in 2009. Furthermore, the Pahang state govt reiterated that there’s been no reports of illegal logging in the area since 2014 while the licensed iron ore mining area will end operations in October this year.

Meanwhile, the aforementioned Tasik Chini Research Center is also hard at work to save the lake. They currently have three labs dedicated to Tasik Chini and carry out research, field work, environmental campaigns as well as educating the public on the lake. The local Orang Asli population have also built friendly relations with the researchers, as both parties work together to better protect Tasik Chini. The Prof with some Orang Asli folk at Tasik Chini. Image from Berita Harian

With the continuous efforts of everyone involved, hopefully one day Tasik Chini could be as vibrant and alive as before, even if it means we never find out about Naga Seri Gumum.

Share this article:
NAH, BACA:
These prehistoric caves in Pahang almost got destroyed to make cement, but they're not safe yet.