[Updated Thurs, 3 July] Hole-y crap, uols! In less than 12 hours, we’ve received a tonne of entries to our super-easy, sap-sap-sui meme contest on the Jalan Pudu sinkhole. Check out the new entries at the bottom.

So the contest is like closed already cos y’know…in 24 hours everyone’s going to move on to the next hot story. In the meantime, Enjoy your Friday… and Wreck the weekend!

BTW we think it’s really quite cute that The Star covers this sorta thing in a TOTALLY SERIOUS tone of voice.

“One of the most-circulated memes pins the cause of the collapse on fictional Japanese monster Godzilla.

Other fictional characters depicted in the various memes are King Kong, the Transformers, Ultraman and Loki.” – The Star We don’t actually know what’s going on here, but the smoke is a nice touch.

4. Between a rock and a hard place 5. This is Times Square. 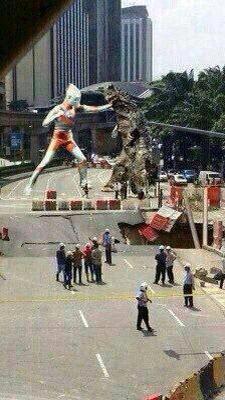 UPDATED: These were submitted on thursday 16. This picture leaves us cold…