With nothing unusual really taking place at the recently concluded 2015 UMNO General Assembly and with the showdown between Najib and Dr M being an anti-climatic affair, what really grabbed our attention was an UMNO branded smartphone.

Yes, you read that right. 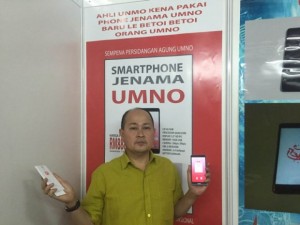 “Betul, I tak tipu you..” Photo by The Malay Mail Online

Customised and sold by a Cyberjaya-based startup company for UMNO party members and supporters, the phone comes with two colors; black and white and sells for RM888. When it is booted up, the user is welcomed by the party’s logo while the UMNO symbol is stylishly engrained at the back. Walauweh! So terer!

With over 800 units sold during the annual general assembly, we’ve decided to come up with a list of ways where the party (and phone) can be marketed even further to obtain the full support UMNO direly needs from the public. So here we go! Now this is what a smartphone really is! Capable of face recognition from the back!

Imagine the phone’s camera amped up to infinity pixels with 4K resolution capable of taking tiny details such as a sperm cell in someone’s butt right to night vision with face detection capabilities to capture sexy time or khalwat videos of a political opponent.

It’ll be cooler if the phone automatically suggests you to tag the said person on Facebook through its face detection service to make the content viral. This way, you save money on procuring the services of cyber troopers.

Let the phone do its work for you because the devil is in the details mah!

2. Release a red colored version of the phone This should completely be the first thing on their minds la. Since it comes with a standard black and white color, why not Include UMNO’s official red color to represent the party’s spirit?

According to a book by Karl Hack and Kevin Blackburn titled “War Memory and the Making of Modern Malaysia and Singapore”, the color red represents courage, bravery, heroism and loyalty. Something which… *cough* *cough* our lawmakers *cough *sneeze* la *batuk* ck *batuk*

Anyways, the color red also symbolises blood, making it the most frequently mentioned colour in Malay literature. However, of late, the color has been closely associated with the Malay based party especially since the Sept 16 Red Shirt Rally held on Malaysia Day.

3. Include Buletin Utama app for easy viewing on the latest news Really! Nowadays everything oso online dy so it’ll be so much easier for fans of TV3’s news programme to keep abreast with the latest happening in the country.

Instead of turning on the television or heading to a mamak to watch the news, information is at the finger tip of each UMNO phone user. By buffering the hourly news programme, UMNO supporters can obtain news information faster than the internet.

4. It should be bauxite and flood resistant This is in Kelantan, btw. Eh… it’s also red!

With the mining of bauxite continuing despite incessant warnings by lawmakers in Kuantan and with floods fast becoming the country’s annual affair, supporters living in these areas would definitely require a durable phone to keep in touch with their friends and family (and higher ups).

Imagine purchasing the RM888 phone only to discover it spoilt after wading through neck deep flood waters. How to call to ask for donation? 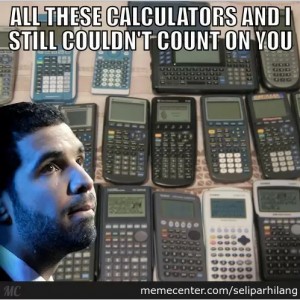 With overlapping facts, details and numbers, this personalised calculator would help to make it easy for UMNO ministers to provide their own standardised economic figures when it comes to national issues.

That way, instead of this fella saying this and that fella saying that, we have everything streamlined. Also, this is because we personally feel many of the ministers are very bad with numbers.

6. Should come with a free pre-installed Ahmad Maslan search browser

With this browser, UMNO supporters can obtain answers on how to cook a simple Goods and Services Tax (GST) free fried rice for the family to life enriching and empowering quotes to how the rise in petrol prices can actually benefit Malaysians.

NAH, BACA:
Dewan Bahasa is holding a textbook writing contest. No, you don't have to be a teacher. 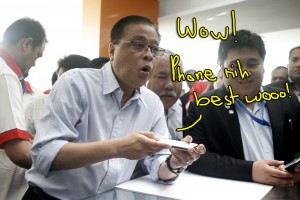 The recently opened Low Ya… ehh sorry! Mara Digital IT Mall is the best place to sell the phone since it is a mall specifically aimed at Malay traders following a fracas at the Low Yat mall in July, this year.

Despite calling for a boycott on Chinese businesses earlier this year, Rural and Regional Development Minister Ismail Sabri Yaakob urged Malaysians to support by coming to the mall. The mall definitely has a chance to rival the famous IT mall as claimed by Low Yat traders themselves.

Anyways, by imposing a 6% discount might do the trick to boost the phone’s sale. Perhaps the first 26 customers can stand a chance to obtain the 1Malaysia People’s Aid (BR1M) ahead than everyone else. This one is important for UMNO supporters who are religious. With so many misunderstanding on what is Halal ranging from chocolates, to mineral water to even trains, this app would help sort out the confusion of the mobile user.

By scanning the product or object or even person through the phone’s built in camera, the app – linked directly to the Department of Islamic Development Malaysia’s (Jakim) online database of Halal products – is capable of determining if the said scanned item or person is Halal or not.  This way, a mobile user is able to distinguish which mineral water is safe to be consumed or which chocolate can be eaten.

How cun is that?

And since Najib is the chosen one by Allah to lead the country, his face can be used as the app’s icon as a mark of respect. The phone should come packaged nicely in a red box decked with UMNO’s logo with the contact number of the donor(s) saved in the gadget so that if anyone requires err.. donations or emergency funding for err.. election purpose and or combatting the Islamic State while being anti-Semitic in the process, they know who to call.

10. Automated alert on sedisyes posts/comments to IGP and MACC With a built in automated sedisyes post detector for Fesbuk and Twitter, UMNO supporters using the phone need not head to the police station to lodge a police report like this guy who has lodged over 1,000 police reports since 2011.

Everytime someone insults the handphone user or posts seditious remarks on the user’s Fesbuk page or profile, an alert is sent straightaway to the Inspector General of Police and the Malaysian Anti Corruption Commission (MACC).

The only problem is deciding what is sediyes and what is not.

Wait! Who is behind the UMNO branded phone?

After some snooping around, we discovered that Chili Mobile is located at Presint 8, Putrajaya (very close to the Finance Ministry) according to the company’s Facebook page. There was no luck in trying to locate more about the company’s profile because no official website (patut lah only 7 likes on Fesbuk page). And no, nothing to do with CILISOS.MY in case you’re wondering.

But this was not the only effort in the mobile industry for the company as in 2012, it launched a full featured smartphone built on Google’s Android platform. But back then it was called DMD Mobile Sdn Bhd according to this website!

That is not all! The company had also launched a Technopreneur Development Program (basically Chili Mobile’s version of multi-level marketing) in April this year through a RM 20 million development grant from MOSTI, MIDA and the Ministry of Youth and Sports.

Jokes aside, according to the founder of Chili Mobile Sdn. Bhd. Abdul Rahim Mohammad, the design is not exclusively for UMNO only and is open to corporations, government-linked companies and other organisations to have their own branded mobile phones. You have to thank the Ministry of Sciences, Technology and Innovation (MOSTI) and the Malaysian Investment Development Authority (MIDA) who helped to do the research in developing the phone.

He also said that he merely found the general assembly as a marketing opportunity to sell the phone and did not rule out the possibility of branding for other political parties as well.

So maybe in the future, we can have this……?