In a week filled with news about GE14 and May 13’s anniversary, you might not have heard that yet another govt statutory body – the Malaysian Islamic Economic Development Foundation, aka the Yayasan Pembangunan Ekonomi Islam Malaysia (Yapeim) – finds itself in the midst of a scandal.

And that’s not even the only report about this Yapeim to have surfaced this week. There’s also been reports of RM1 million meant for orphans allegedly being misused to help pay for a lawyer’s legal fees, as well as allegations that Yapeim employees weren’t allowed to vote for Harapan in GE14.

Amidst all these revelations, you might be thinking: what on earth is happening with Yapeim anyway? Well to start it all off…

This entry starts back in 2015, when a whistleblower broke the news that money meant for Yapeim’s orphan fund Pemangkin was used to pay for an UMNO minister’s holiday to the United States.

So quick guide on Yapeim and its orphan fund: it was founded as a govt statutory body on 13 Oct 1976, and its goal was to act as a means to uplift the Muslim community in Malaysia, and empower Muslims in the economy. Besides stuff like collecting donations and giving out alms, it also has a charity in place for orphans called Foundation for the Advancement of Orphans and the Poor (Pemangkin).

But apparently, in May 2014, this minister used RM410,978 meant for Pemangkin for his trip to the US, with RM274,493 being used to pay for flight tickets for him and his wife. Thousands extra were spent on dinners, golf, hotels and accommodation. There was also some reports that RM223,000 from Yapeim might have been diverted for by-election campaigning.

The minister in question would later be revealed to be then-Minister in the Prime Minister’s Department Jamil Khir Baharom, who denied the allegations against him. 2. Money meant for orphans was allegedly used to pay off Najib’s aide

Aiyo, again the orphans kena. So this time, in early May 2019, news broke of allegations that another RM1 million from Pemangkin’s orphan fund was misused in 2017, this time to pay off the legal fees of a lawyer who coincidentally was also an aide to former PM Najib Razak.

How we assumed they got that figure.

Apparently, a number of secret payments were made to him without the approval of Yapeim’s board of directors. Yapeim however rejects these claims, saying that while yes, there were payments made, it was neither up to RM1 million nor was it from the orphans’ fund.

“The legal fees were not taken from the trust or orphanage funds as claimed. Yapeim has two funds – general (am) and charity (amal jariah). The money used to settle the legal fees came from the general fund, and the amount is not RM1 million. It’s much less than that,” – Adawiyah Abdul Samad, Yapeim legal and regulatory dept chief, as quoted by Malaysiakini

This lawyer pal of Najib’s was apparently also one of Yapeim’s board of trustee members from 2017 to 2019. He was also part of the Prime Minister’s Department too, working as a strategic planning director. Najib meanwhile distanced himself from the whole ordeal, claiming that he had nothing to do with the payments made.

3. Yapeim may have tried to cover a bad business move that cost them RM12 million

So in case you didn’t know, Yapeim runs a chain of Islamic gold pawn shops called Ar Rahnu. Formed in 1992, it’s touted as an easy ‘micro-credit’ option for when poorer folk need to raise funds quickly for household or business purposes thru gold pawning that follows religious law. 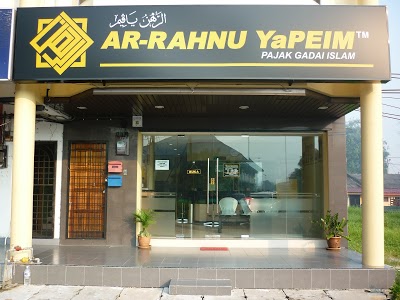 The problem now tho is that Yapeim allegedly lost RM12 million in its Ar Rahnu gold pawning scheme when it failed to sell off 300kg of unclaimed jewels in its possession that was worth RM80 million. In an attempt to cover up their failure, they forced their subsidiary company Input Yapeim to buy up all the gold.

Had they managed to sell off the gold, they would have prevented that loss of RM12 million. Yapeim even sacked the then-chairperson of its syariah committee Wan Zahidi Wan Teh after he objected to the move, and the management even allegedly interfered to prevent an investigation into the matter.

4. A Yapeim senior officer allegedly warned his employees to not vote Harapan

And to top it all off, in the latest round of controversy surrounding Yapeim, there’s a viral video doing the rounds in the interwebz featuring an alleged senior officer of Yapeim warning his employees against voting for Pakatan Harapan in the weeks prior to GE14.

“I know there are those among you who choose Pakatan Harapan…. I will go to the Election Commission (EC)… and I will check one by one where you vote and what you voted for. If you vote for Pakatan Harapan, you are not qualified to work in Yapeim. Go find work with DAP,” – alleged Yapeim senior officer, as quoted by Malaysiakini

The officer in the video also said that if the Harapan wins and Barisan loses, everyone in Yapeim will be replaced.

“I am confirmed to be gone if the government changes. Those in front of you right now will all be gone. Balik kampung, tanam kangkung,” – alleged Yapeim senior officer, as quoted by Malaysiakini

With so much drama surrounding this Islamic development foundation, is there any hope in the future for Yapeim?

Yapeim has admitted its wrong, and wants to become better

Following Harapan’s win in GE14, a number of changes across govt bodies happened, and Yapeim is no different. In November of last year, a new board was put in place, and its new chairman Mohd Daud Bakar has just recently come out to admit the errors in Yapeim’s past ways.

“We identified various cases of possible negligence and mismanagement by the management over the past few years,” – Mohd Daud Bakar, Yapeim chairman, as quoted by Free Malaysia Today This comes not just after the recent revelations about Ar Rahnu and the secret legal payments, but also after PricewaterhouseCoopers (PwC) did an audit on the the Islamic government agency and found a number of irregularities in their numbers. And now, Daud wants to set things right, and aims to work with Yapeim’s board to go thru all the problems plaguing the foundation.

“Everyone involved in wrongdoing, and causing leakages in Yapeim, will be held responsible, according to the foundation’s internal rules, and the Malaysian law,” – Mohd Daud Bakar, Yapeim chairman, as quoted by Malaysiakini

In just a year, we’ve seen a number of various govt bodies get exposed for being slush funds and poorly managed, such as the Armed Forces Fund Board (LTAT) and Malaysian Rubber Board (MRB) all having various news revelations about their bad management and various amounts of money missing. It’s perhaps for the best if Yapeim and these other govt bodies in trouble try to be more transparent, such as publishing their accounts and publicising their annual reports. As for Yapeim, with a new group of people in charge, it’s might just be the time for Yapeim to get back to their original goal of helping the community, instead of the powerful’s own pockets.

Only time will tell.