[Update (4th July 2019): Looks like there’s another display of anti-palm oil sentiment that Teresa Kok has voiced out against. Recently, she told a press conference that she received a video clip of students in an international school allegedly linking palm oil plantations to environmental damage and orang utans during a school concert (watch the video of Teresa speaking about it here).

She called for the school’s headmaster and teachers to visit her ministry to learn about the efforts done to make palm oil more sustainable and not sow seeds of hatred against palm oil in little kids.

On top of this, her ministry is also facing the challenge of pushing the percentage of Malaysian Sustainable Palm Oil (MSPO) certified producers from the current 36% to the targeted 100%.]

Earlier this month, Teresa Kok made headlines when she criticised the Singapore Zoo for relating Orang Utans’ plight to the palm oil industry. The sign at the orangutan enclosure. Image from Channel News Asia.

She said that the displays had spoiled the maruah of palm oil despite the work put in to make palm oil sustainable, and called for ASEAN to support one another, particularly on breaking the stigma against palm oil.

“If the EU (European Union) countries can stand united on assumptions of unsustainable production and consumption of palm oil … we as ASEAN should stand tall to fight against those who are unfair and have discriminatory judgments.” – Teresa Kok.

Why the defensiveness? Well, it’s probably because of the EU’s crackdown on palm oil. 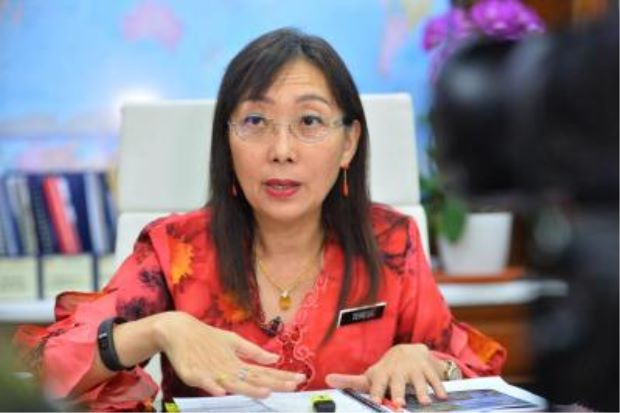 According to the French Ambassador to Malaysia Frederic Laplanche, there’s no ban on palm oil in EU but instead a gradual withdrawal of incentives for palm oil-based biodiesel. In 2017, the Members of European Parliament (MEPs) called for an intro of a single certification scheme (along with sustainability criteria) but also called to phase out the use of deforestation-causing vegetable oils by 2020.

But is palm oil really that harmful?

The sign at the Singapore Zoo isn’t wrong tho. Palm oil still does endanger orangutans Palm oil production is allegedly responsible for about 8% of the world’s deforestation between 1990 and 2008. In order to make way for palm oil plantations and keep up with the demand for the cheaply produced oil, forests have to be cut down or burned. Consequently, greenhouse gases are released, biodiversity is lost and habitats are destroyed, so animals like orangutans, rhinos, elephants and tigers are stripped off their rights to food and shelter.

According to a research paper published on Cell Press last year, about 50% of Bornean orangutans have been affected by natural resource extraction and that over 100,000 of them have lost their lives between 1999 and 2015. But it wasn’t just the loss of habitats but also the killings of mommy orangutans seen as agricultural pests, resulting in orphaned baby orangutans.

And since we’re on the topic of the consequences of unsustainable palm oil production, we decided to also bring to your attention the human rights issues connected to palm oil production. In late 2016, Amnesty International released a 148-page long report exposing some serious human rights abuses on palm oil plantations allegedly connected to Wilmar in Indonesia and Malaysia, including child labour, gender discrimination, as well as exploitative and dangerous working practices like low wages and unrealistic targets. Notice his hands are not gloved. Image from Eco-Business.

“My hands get itchy and scratchy. My finger nails rot and then fall out. It starts from the edge and swells up, liquid comes out of the nails and it falls off.” – a woman who sprays pesticides on the plants told Amnesty International about the lack of provision of protective equipment.

The Roundtable on Sustainable Palm Oil (RSPO), of which the parent entity of Singapore Zoo (Wildlife Reserves Singapore) is a member, responded to the report by saying that the relevant parties have been addressing these issues.

Another major human rights issue resultant from palm oil plantations is the loss of native land rights for the Penan, Berawan and Kayan people in Sarawak, as shown in a video by Bruno Manser Fonds. When we said that palm oil is linked to deforestation, it’s not just the flora and fauna that suffers. The livelihood of people also kena, since the tribes rely heavily on the rainforests.

Maybe because of the palm oil industry’s bad apples (or bad oil?) who don’t sustainably harvest palm oil, the EU has decided to classify palm oil as “high risk”.

“The entire Delegated Act process has been based not on the science of biofuels, or the science of deforestation, but on the politics of protectionism.” – Teresa Kok‘s response to the EU’s classification, The Star

But actually, deforestation has slowed down substantially in the last 7 years

The Center for International Forestry Research (CIFOR) used a series of satellite images used to map how much old-growth forest in Borneo have disappeared and how much have been converted to plantations from 2000 to 2017.

It showed that not all of the plantation development resulted in deforestation, mainly because of the regulatory steps taken to curb the conversion of forests into plantations (and additionally, Teresa Kok spoke about plans to maintain at least 50 per cent of the land as forest cover and not allow any more plantation expansion).

Researchers also found that the spread of plantations had two peaks (2009 and 2012) and each peak followed a year in which there was a peak in the price of crude palm oil. Both the price and plantation expansion have been falling since 2012.

This correlation between price and plantation expansion indicated that market forces are behind this, on top of all the pressure from anti-palm oil campaigners. And the thing is, market forces also tell us something else.

Palm oil is here to stay, so we’d better find a way to make it sustainable

Palm oil is the world’s most productive oil crop (although not as profitable as marijuana… heh), because it yields WAY, WAY, WAY more oil per acre of land than other oil crops! 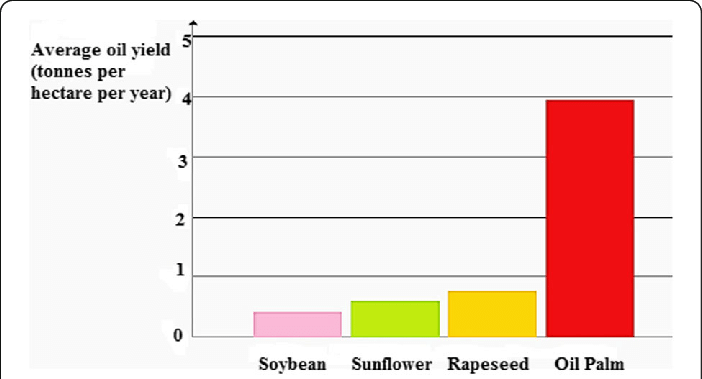 It’s not even a fair fight. Image from a UNITEN research journal.

Because of this, IUCN found that other oil crops require up to 9 times as much land to produce than palm oil, so replacing palm oil with any other oil crop would significantly increase the total land area for plantations. More land = more deforestation.

So it’s not that palm oil is bad, it’s actually very, very good. It’s the practices that could use a bit of improvement.

Also at this point, it’s nearly impossible to avoid products containing palm oil, because it’s in almost everything.

“Palm oil is in close to half of the products we buy in the supermarkets – in everything from shampoos and soaps, to pizzas and biscuits. It’s everywhere.” – Dr Emma Keller of WWF told Newsround (quoted by BBC). Among the stuff you see in the ingredient list. Image from Orangutan Foundation International Australia.

And remember when Teresa Kok said in Parliament that red palm oil contains 20 types of beta-carotene and anti-oxidant properties, free of saturated and trans fats? She’s not wrong about the health benefits of palm oil.

“You will be given a free bottle of red palm oil, so that all of you can look as youthful like the Prime Minister, the Deputy Speaker and I.” – Teresa Kok joked. 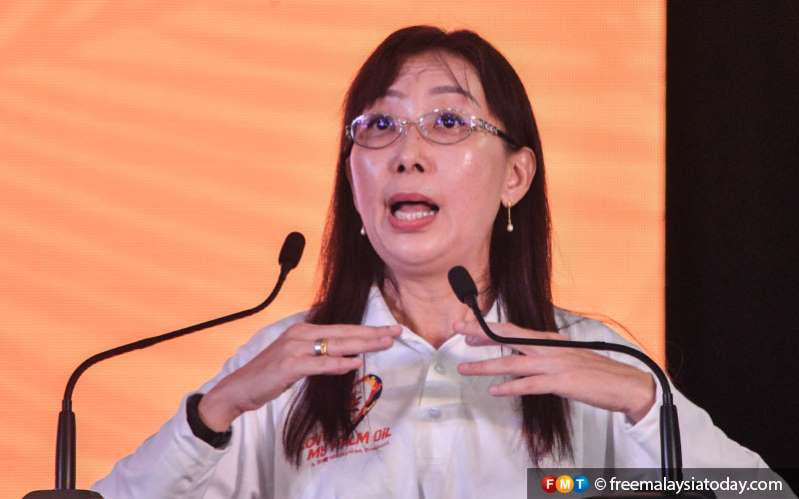 So why the negativity? Well, The Guardian talked about an allegedly “colonial attitude” of banning palm oil.

“Why are the EU doing this to us? They have not thought about the farmers, about the human price. The statement ignored us. They are so far away they do not care. We are not harming the environment, we are looking after it. I am very angry, everybody is very angry. How can we not be, this will affect our rice bowl.” – a farmer Lehan Samiran angrily told the Guardian.

And here’s what people are doing… Look for the symbol. Image from our old article.

The RSPO (ex-CILISOS client ya) has been working to ensure that there’s no deforestation, no peat development and no exploitation (NDPE) in the supply chain (we’ve previously written about RSPO), but these processes do take time, since supply chains are notoriously lengthy these days.

Ironically, a report by a bunch of NGOs claimed that a lot of the funding for palm oil plantations in Borneo actually comes from Singapore, the same country Teresa Kok was in when she came across the zoo signboard.

Besides the United Overseas Bank (UOB) mentioned in the Bruno Manser Fonds video above, DBS Bank and OCBC Bank also provided loans to palm oil firms which allegedly engaged in unsustainable practices such as draining peatlands, poor fire prevention and mitigation, as well as engaged in land disputes with local communities.

And according to Chain Reaction Research, Southeast Asian banks (including Singaporean banks) are the leading palm oil financiers, followed by East Asian and European banks. Even HSBC didn’t escape the spotlight. One of the big moves in ensuring sustainability of palm oil is that the entire state of Sabah is going to become 100% RSPO-certified by 2025.

Probably to the chagrin of their banks, Singapore also launched an EcoCart tool that allows shoppers to check if products in supermarkets have sustainable palm oil onot. However, certification alone should not be the only solution as the standards have been criticised for technical loopholes, like not being strict enough and corrupt practices in its auditing processes, which the RSPO planned to fix. And there’s also a need for researchers to team up with the palm oil industry to find better ways to protect the planet without forgoing palm oil production.

At the same time, Malaysia and Indonesia will continue to defend palm oil and make the EU understand that palm oil can be sustainable, with the most recent one being a 10-day trip in Europe to negotiate with the European senior officials, resulting in some positive responses.

“They were impressed that Malaysia still has a lot of forest cover. We told them that we still have 58.4 per cent forest cover. We shared with them our efforts on sustainable palm oil certification, where the government came out with funding to help the small farmers for the certification, so they are impressed with all the efforts put in by Malaysia.” – Teresa Kok described the visit.

Share this article:
NAH, BACA:
Malaysia is set to be the source of the next global monkey malaria threat. Wait, what?!