Just about everyone in Malaysia knows about May 13, 1969.

Most people remember the May 13 incident as the day all hell broke lose in Malaysia, where racial relations reached a boiling point. People were being killed over something as simple as their skin colour. It fact, May 13’s significance is still relevant with politicians still talking about it today. But this ISN’T an article about the May 13 riots (you can read one about that one here).

Just over a year before the May 13 incident, there was another riot that had the whole nation at a standstill: The Penang Hartal Riot of 1967. The first day alone 5 were killed and 92 injured during the riot. When all was over, 29 were dead, over 200 hurt and around 1300 arrested. The riot was frontpage news all over the country (and even Singapore!). 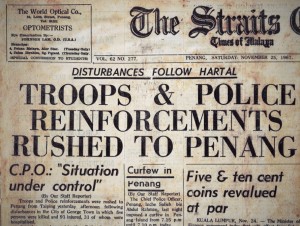 But what happened? And wadahek is a “Hartal”? We’ll answer these questions later on, but first let’s take a look at what Penang was like in the 1960’s

1960’s Penang was not an island paradise

No one went to Penang for holidays back in the 60’s. In fact, Penang was going through a rough time cause:

Basically, Penang was in a whole lotta trouble. If Buzz and Woody lived in Penang back then.

But then the cowdung really hit the fan when everyone lost 15 sen.

Well, 15 percent of their savings to be exact.

Malaysia introduced a new currency (introduced as M$ but we call Ringgit laa k) in June 1967 that ran alongside the old currency (Malaya & British Borneo Dollar).

So now Malaysia got two different currencies, the old dollar linked to the British Pound ↓ And the new Ringgit, supposedly worth the same as the old dollar ↓ Then in November 1967, the British Pound dropped in value, so the old dollar that was linked to the pound dropped as well.

HOWEVER, the new ringgit’s value didn’t drop. Means 1 old dollar only gave you 0.85 of Ringgit! Keep in mind this was the 60s, a lot of the poorer folk didn’t have bank accounts. Remember those stories of your grandparents stashing money in mattresses? Well, it was like having 15% of that mattress burnt overnight!  It was even estimated that the general population of Malaysia lost up to 42 MILLION because of the devalue (not 42 billion, that one is 1MDB laa).

And of course, people were very the marah (╯°□°)╯︵ ┻━┻ Even Mahathir’s not impressed.

People damn marah, and they had a right to. The gomen promised that it wouldn’t change the value of the old currency, yet broke that promise. And now it’s the people who kena carry the burden of the currency value dropping.

To be fair, the gomen did try to explain why they had to drop the value, but people were still very restless and angry about it. And then, the small opposition parties began to use this issue to gain support.

One of these parties was the Labour Party of Malaya. The Labour Party was initially just a small opposition party with their members being mostly Chinese. Their main stronghold state was Penang. They had gained so much support over the currency issue that the gomen even had to listen to their suggestion of making the 5 sen and 10 sen coins of both old and new currency the same value.

But they weren’t done yet. With calls for the gomen to allow some time before lowering the value of the old currency ignored, Penang Labour Party leader Lim Kean Siew called for a hartal – a form of protest where the people stop working and close businesses – in Penang on November 24, 1967.

With Penangites the main followers of the Labour Party, the hartal was a go… only that it didn’t go as planned.

Because that’s when the violence started! 5 deaths were reported on day 1 of the hartal riot, with 92 injured, 32 of them seriously. The gomen had to issue a 24-hour curfew in Penang, with policemen from Kuala Lumpur and even the army sent there to help maintain peace. The violence during the Penang hartal riot. Pic from FZ.com 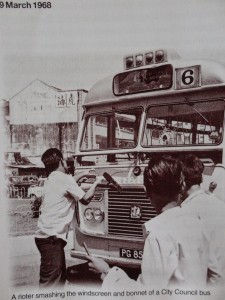 The hartal itself was initially deemed a success though. But then why got racial trouble?! It was mostly down to three reasons:

There are claims that the racial violence began when Labour Party members travelling around Penang to force shops to close went to a Malay residential area. A Malay pisang goreng seller didn’t wanna close shop, and he and several other Malays fought and chased away the Chinese members of the Labour Party. These Malays were then killed somewhere else in the island. Other Malay people soon headed out to town to seek revenge, and most of those injured or killed were Chinese people travelling through Malay neighbourhoods.

Other stories of how the racial violence began involved Chinese and Malay gangsters. Chinese gang members apparently blocked off the Malays in a part of town after a rival Malay gang had done the same to the Chinese. These gangs took advantage of the situation to cause havoc all over Penang.

There were also claims that Labour Party members that had formed aggressive militant factions and tried to cari pasal during the hartal. Several secret societies also looked to cause trouble , namely Tentera Sabilullah, an illegal extremist group whose main goal was to kill the Chinese.

The main areas affected in Penang were Beach Street, Chulia Street and Penang Road. However, the unrest soon spread, with several areas in Kedah, Perak, Perlis and mainland Penang, even as the island itself slowly regained peace. Tentera Sabilullah was blamed for the racial violence spreading to Kedah and Perak.

Kuala Lumpur was also threatened with hartal, but nothing happened in the end. Towns around the capital were even issued curfews. PM at the time Tunku Abdul Rahman and his deputy Tun Abdul Razak worked hard to prevent anything that may cause unrest in the capital. Announcements were made from them asking for the public’s help in maintaining the peace.

They were careful in not calling the violence racial. Instead, Communists were blamed for the trouble caused (Need to faham that back then “communist extremists” was a common threat to national security).

“I request responsible and loyal citizens of this country of all races not to play into the hands of the Communists and fall into their trap. The incidents that have taken place are not racial. They were merely acts of hooliganism by Communists and subversive elements. They try to make it appear racial in order to build up tension among the various communities in this country and by so doing they hope that these acts of violence will spread throughout Malaysia.” – Tun Abdul Razak, 29th November 1967

In total, 29 were killed and over 200 injured during the riot.

But the question is…. who should take the blame for the hartal riot?

When the violence had stopped, the gomen started raiding offices and arresting people. The number of people arrested during the aftermath of the hartal riots isn’t certain, but sources estimate that between 1300 – 1600 people were arrested. People being arrested during the Penang hartal riots. Pic from sustainablelivinginstitute.blogspot.my

The gomen focused on raiding the Labour Party’s offices especially as they had initiated the call for hartal in the first place. Lim Kean Siew along with several other Labour Party leaders were arrested almost immediately after the riot. Claims that the Labour Party had planned for violence were strengthened when Maoist and socialist books and other propaganda material were found in their offices. Banners asking for the hanging of the Tunku were also found. Don’t blame the Labour Party entirely though, as Lim Kean Siew (the one who called for hartal) didn’t actually call for a racial riot. In fact, no political party or leader had intended or expected the violence because the hartal itself was a response to the devalued Dollar. Koay Su Lyn, of the Penang Insititue (who by the way we’d like to thank for helping us out) also pointed out that the gomen had a role in causing the trouble in the first place.

“Personally, the government is to be blamed for not providing a grace period for people to get their old currencies changed. ….. The decision to devalue the old RM was too abrupt ….. This certainly caused anger and as such, the Hartal was organised to protest against the abrupt decision. ” – Su Lyn, in an email interview

To their credit, the government worked really hard (no really, they did) to ensure peace was maintained. Groups like Tentera Sabilullah that caused trouble during the hartal were arrested along with other secret societies and groups. However, they didn’t set up a commission to investigate the riot despite numerous calls for one.

If it was such a big deal, then how come so few people know about it now?! 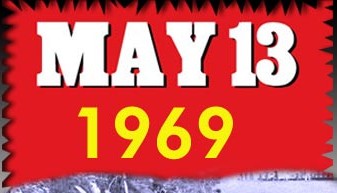 Well, very simply it’s because May 13 happened just over a year later.

The hartal riots was actually quite big news back then, with most major newspapers in Malaysia reporting about it for a few weeks. A lot of people were worried that the hartal and the violence attached to it would reach Kuala Lumpur. However, today, even the older Penangites don’t recall the event. Su Lyn had this to say about it not being remembered nowadays:

“The prominence of May 13th has certainly overshadowed the Hartal of 1967 and probably because the Hartal wasn’t well documented as compared to May 13th.” – Koay Su Lyn, in an email interview

Su Lyn adds that during the May 13 incident, Penang actually suffered less violence compared to the rest of the country since the state was more prepared to handle a riot. This was a result of the measures the state government took to strengthen security enforcement during the period after the 1967 riots.

But these weren’t the only racial riots that took place in Malaysia in that decade. The Malayan emergency left the Chinese associated with communist extremism, with the 1964 racial riots in Singapore and the Bukit Mertajam clashes happening the same year. The multiple races and ethnic groups in Malaysia seldom interacted, as mentioned in a blog post by blogger Helen Ang.

“Malaysia continued to be an ethnically polarized country in the 1960s. The race and religion fault lines remained the same.” – Helen Ang, in a blog entry. Thankfully, since the start of the 70s, racial relations in Malaysia have greatly improved. While many still agree that we need to do more as a whole for the sake of the nation, we’ve come a looooong way since the racial struggles of early Malaysia.

As such, the responsibility is now with us to continue the muhibbah spirit in Malaysia, regardless of race, religion, culture or politics.