The world of the Malaysian English literature has recently lost one of its most prominent writers, K.S. Maniam, due to cancer of the bile duct. He died on 19th February 2020.

You may have known him for his poems, short stories, novels or even plays. And if you were studying in Form 4 and 5 in the early 2000s, chances are you’ve studied his novel, The Return. K.S. Maniam and his novel, The Return. Img from The Star

He was said to have shaped the English literature in Malaysia through his works which normally touch on the issue of nationality, history, culture, language and belief. And his works would make us think of what we truly understand about the concept of diaspora in Malaysia. Some even believe that he pioneered writing in English although there is a counter-argument claiming that he was among the second generation of Malaysian English writers.

K.S. Maniam was able to do that because his story mostly resonated with him and were according to his personal experiences. With that being said, we decided to learn more about him to find out how he shaped Malaysian literature.

Born on 4th March 1942, K.S. Maniam, or his real name Subramaniam Krishnan, was the son of an estate worker, who also worked as the hospital laundryman, in Bedong, Kedah. Some believe that his forefathers, who were from the Tamil community of South India, came to Malaya as indentured labourers.

But another report stated that he was the descendant of a grandmother who migrated from India to the Malay peninsula in 1916. This grandmother was his muse for a character in his first novel, The Return.

Typically, children of estate workers like K.S. Maniam himself received his early education from a Tamil school. But a year after he started school, he insisted on entering an English medium school in Sungai Patani. After completing studies in 1960, he left for India where he was supposed to study medicine.

But he then flew to England where he was trained as an English teacher at the Malay Teachers College in Wolverhampton. This was when he met fellow writer, who would later in his life become the National Laureate, Professor Dr Muhammad Haji Salleh. After receiving his education there, K.S. Maniam returned to Malaysia to teach English in Kedah for a few years before becoming an Associate Professor in Universiti Malaya’s (UM) English Department. He insistent on the needs for young Malaysians to learn the language.

“English connects you to the world. you must know English and also to write well and speak well.” – Maniam to Astro Ulagam.

So, when did he start writing? Well, sometime in the 60s. His first work, which was a poem, was published when he was only 22 years old!

Since then, he participated in two writing competitions organised by NST together with McDonald’s and Shell in 1987 and 1990 respectively. He won both competitions through his stories The Loved Flaw and Haunting the Tiger. At the same time, he was said to have started writing short stories which were published in local and international journals.

But his work was only widely known after these competitions when he started writing his novels. Some of his novels are The Return (yes, we mentioned this earlier), In A Far Country and Between Lives.

Besides teaching and writing, he was also known to be the important contributor to the Malaysian performing arts scene. He was one of the founding members of a performing arts outfit called Five Arts Centre (one of its current members include politician Fahmi Fadzil btw). This was when he wrote his original plays such as The Cord, The Sandpit: Womensis and The Skin Trilogy. K.S. Maniam standing before a poster of his play, The Cord, in 1984. Img from The Star

Despite having a lot of contribution to the teaching, literature and performing arts scene…

He apparently has never been recognised by govt literary institutions

As mentioned earlier, his works mostly speak on the issues of culture, history, nationality and the sense of belonging. He was really outspoken about this and we gotta admit that these issues are still relevant to most Malaysians up to this day.

“I wanted to close the gap and say we all come from the same earth. The soil may be slightly different, but not so different. So if the earth is so accommodative to us, why can’t we be accommodative to everybody? Everybody has given something (to this country).” – Maniam to Astro Ulagam.

We also mentioned that his work would make us rethink diaspora in Malaysia, particularly the Indian diaspora – mass migration from India to the Malay peninsula. And this was why he became the the inaugural recipient of India’s Raja Rao Award, a now-discontinued prize given to writers who have contributed to the literature of South Asian diaspora.

NAH, BACA:
The epic story of how these Malaysians swam back to our country... from INDONESIA

Besides that, it’s been said that he is among the most studied and researched Malaysian writers worldwide. This may seem true considering how some of you may have studied his novel in school or have even used his work to write your dissertation for Masters or PhD. In fact, a few of us in the office studied his books in uni, including this writer, who studied K.S. Maniam’s Haunting the Tiger. 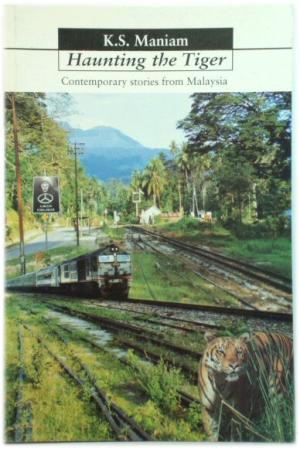 Haunting the Tiger. Img from abebooks.com

A quick search online brought us to a number of dissertations written in local and international journals. You can read some of the journals we found online here, here and here (you may need access to some of these journals tho).

Although he only wrote in English, he used to work together with Dewan Sastera to translate some of his works to Malay.

“I’ve worked with Dewan Sastera by assisting them in translating several of my plays into Bahasa Malaysia.” – Maniam to Eksentrika.

But even with all those contributions, he isn’t recognised by govt literary institutions. While researching for this article, we found a piece written by K.S. Maniam to the Nou Hach Literary Journal entitled ‘The Life of Writers in Malaysia’ where he wrote about the literary scene in Malaysia. According to what he wrote, unlike the Malay literature where it has most demands due to the number of readership, literature in other languages oftentimes do not receive much institutional attention.

“Writers using Chinese, Tamil and English are left to fend for themselves. There are few literary competitions, except perhaps for works written in English.”- Maniam wrote to the Nou Hach Literary Journal in 2012.

He also pointed out how the literary competitions that he participated in the 80s have been discontinued. 🙁

In a separate news, Dewan Bahasa dan Pustaka (DBP) in one of its magazines in 2017 has even allegedly misreported him by stating that he had moved to the United States to be accepted and recognised internationally. Although it may be typical for local literary work to be accepted overseas to be deemed successful, K.S. Maniam denied that he had moved to the US. However, he didn’t take any action against DBP for misreporting. We weren’t sure what happened afterwards but that’s a story for another day.

And, actually, he didn’t quite care that he wasn’t given the recognition he deserved by the govt literary institutions. As a matter of fact…

“My dream would be that new readers read just one of these stories and feel moved by it; it stays with them long enough for them to say, ‘Yeah, he changed my character a little bit.’ Then, that’s satisfactory.” – Maniam to Astro Ulagam.

And he kept writing because he simply loved writing

When Malachi Edwin Vethamani, K.S. Maniam’s friend who is also lecturer at University of Nottingham, shared the news about K.S. Maniam’s passing on Facebook, he also mentioned that…

“He (Maniam) wrote because he loved writing. His work will testify to the wonderful writer he was.” – Quoted from Malaysiakini.

And this may seem true because, in recent years, K.S. Maniam could not write as much as he used to as he was ill. But that didn’t stop him from releasing a new book called Selected Works, which features excerpts from his novels, short stories and nine unreleased poems.

The book was launched in 2019 at an event to celebrate the writer which was organised by the University of Nottingham’s School of English and Maya Press. In the event called K.S. Maniam’s Writing: A Celebration, the writer said that he was grateful to be celebrated during his lifetime. KS Maniam signing his new book at the event. Img from S.S.KANESAN via The Star

When it comes to writing, K.S. Maniam believes that everyone has a short story to tell. And he told The Star back in 2002 that he felt that everyone should record themselves in fiction. So if you’re an aspiring writer who needs guidance in writing…

“If they (aspiring writers) feel they have the writing spirit in them, never give up, go on writing. If they feel after a while that this spirit is not there, then they should do other things.” – K.S. Maniam to The Star.

The passing of K.S. Maniam is a huge loss to our country, especially to the literary community, but hopefully his works will always be cherished and remembered by many.