Quick pop quiz! Which state in Malaysia has a nickname associated with a foreign country? 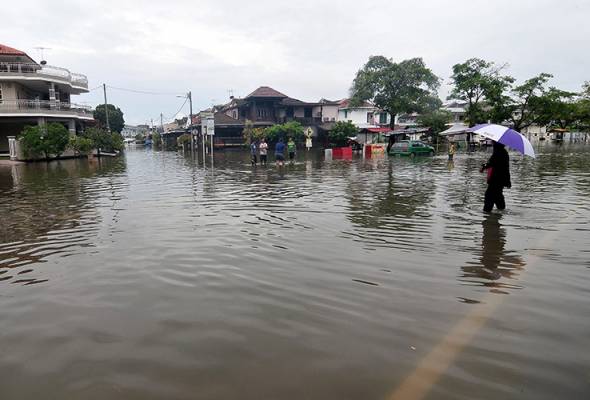 The Venice of Malaysia? Img from Astro Awani.

If you guessed Kelantan, you would be right. Said to be one of the earliest states in Malaya to accept Islam, Kelantan is famously known as ‘serambi Mekah‘, or the veranda of Mecca. Because of its prevalent religious image and its associations with PAS, it’s common for people to associate this east coast state with Islam and Middle East culture. But did you know that Kelantan had another obscure, foreign-country-related nickname in the 1950s?

Back then, the state was known as the ‘Paris of Malaya‘, but it’s not because everyone was super romantic and carried baguettes everywhere. Nope…

It’s because of the rampant prostitution in the state

And we’re not saying that foreign penjajah set up brothels in the state and made it their base of operations, either. Enough Kelantanese people turned to a life of prostitution back then that Kelantanese harlots were about as common as Datuks today. In a 1959 news report, Nik Mohamed Amin bin Ali, who headed a committee that investigated the rampant body-selling in the state then, had this to say:

“Wherever one goes, over the length and breadth of the country, one will find prostitutes from Kelantan.” – Nik Mohamed Amin, as reported by the Straits Times, April 1959.

Even more shocking was the committee’s finding that schoolchildren (!!), both boys and girls (!!!), were also involved in prostitution. According to a 2005 paper that interviewed several prostitutes from Kelantan, one admitted to have started whoring at the age of 14, back in the 1960s.

“I studied until Standard Five and after that stopped because my parents could not afford it… when I was 14 years old, I became wild. I prostituted myself. I did not care who my clients were. Sometimes I slept in Kota Bharu.” – a prostitute, in an excerpt from the 2005 paper. The prostitution issue in Kelantan had stretched back for a long time, too. Munshi Abdullah, who voyaged to Kelantan in 1838, recounted two things that stood out then: the establishment of the religious school system that we call ‘pondok‘ today, and the ‘wild women’.

“So I saw in the state of Kelantan too many wild women (perempuan jalang). When the evening comes, they walk in droves to the small commercial boats, wearing nothing but a piece of cloth draped up to the chest, and their hair adorned with ornate hairbands. Some wear long jasmine garlands, flowing down to their knees… there are those who became pimps and went up to the boats to ask if they’re interested.

As is the custom in the state, there is no shame in such work. The people held cockfights and gambled and smoked opium. Among a hundred people, you can hardly find two people who carried out religious obligations like praying or other duties as put forth by Allah on them.” – excerpt from ‘Kisah Pelayaran Abdullah ke Kelantan‘, edited by Amin Sweeney, badly translated by Cilisos.

With such a long, significant history of sugar for sale, it’s no surprise that a nickname like the ‘Paris of Malaya’ got slapped on the state – although some Parisians got deeply offended by the comparison, saying that London and KL had more debauchery going on. Regardless of that, the co-existence of religion and prostitution in Kelantan might be puzzling at first, so you might be wondering…

Why are there so many whores from Kelantan back then? If you’ve read our article about the rampant prostitution in British Malaya before, you might guess that it’s because on an influx of foreign labor, but Kelantan’s case is a bit different. While a majority of whores in the Straits Settlements and the tin states were Chinese, in Kelantan it was reported that most – if not all – of the recorded prostitutes were Malay women. As for why they’re doing it, this paper explains it in more detail, but to simplify, some of them were forced into the lifestyle by their prostitute mothers and grandmothers, while others by their husbands.

But a significant portion were forced into it by necessity. Education for girls wasn’t big in Kelantan back then, and many parents from poor families couldn’t afford it. Girls often drop out of school at a young age, or not go at all. They were expected to do chores around the house, or help their parents work by planting paddy or tapping rubber. Many got married off early, sometimes as a second or third wife to polygamous men, and most of these marriages end up in divorce.

Many end up having to support themselves, their children, and sometimes even their parents from a young age, and with little education and skills to sell, many turned to prostitution. Sometimes, even married women need to prostitute themselves. Some husbands would pimp out their wives for extra money, while others neglected the welfare of their wives when they had to leave the state for a few months to work somewhere else during the rainy seasons. Fishermen may travel west to Kedah to harvest paddy during the monsoon, for example. Img for illustration, from Harian Metro.

In these cases, as well as divorces, many husbands left their families without enough support, so the wives had to turn to prostitution to survive.

“A nightclub dancer told me that her ex-husband gives her twenty ringgit every month; the money is not enough to buy milk for [her] child. Now she has an income of fifteen ringgit per day from being a prostitute.” – excerpt from a news report, quoted by the 2005 paper.

Still, many writers have noted that Kelantanese Malay women were known for their business acumen and diligence. Many became businesswomen selling fish, cookies, and produce, among others, and many more seek out money by working in the paddy fields or teaching the Koran from their homes. But even with other options of income available to them, some still had to sell their bodies part time to make ends meet. This is the oversimplified gist of the problem, but essentially it’s hard to be a Kelantanese woman back then, and for many, prostitution is the only option available.

That was a pretty dark take on Paris, but things had supposedly changed since then…

To be fair, most mentions of Kelantan being the Paris of Malaya we’ve found came from the 1950s, when the committee was formed to look at the prostitution problem in the state seriously.  Since then, Kelantan’s image had been reshaped, most prominently by the PAS government when they took over in 1990.

Among others, they’ve closed down gambling premises and cinemas in Kelantan, while hotels and shops were no longer allowed to sell and serve alcohol in public places. Taking it a step further, they introduced a State Enactment in 1998 to control entertainment, which injected Islamic elements and outlawed the less Islamic parts of performances like wayang kulit, makyong, and main puteri, among others. With these changes, one might say that the image and feel of Kelantan today is considerably more Mecca than Paris. However, while we can say that prostitution is no longer Kelantan’s most famous feature, literature would suggest it’s not completely dead, either. A 1981 paper mentioned prostitution still being practiced as a side-income, and the 2005 paper we referred to earlier interviewed both former and practicing prostitutes in Kelantan between 2001-2003. And earlier this year, there was news of a prostitution syndicate in Kelantan involving single mothers.

Perhaps something went wrong somewhere, but that’s another story for some other day. Anyways, now you know how Kelantan was once called the Paris of Malaya.