It’s Chinese New Year and this year, we welcome the year of the pig!

However, we learnt that pig isn’t really welcomed here in Malaysia. Ciliboss saw a sign on a prohibition of raw or cooked pork-based products into Malaysia on a flight back from Vietnam. He went to Vietnam earlier in the month but didn’t see any sign like this before.

And the prohibition of those products is because of a disease outbreak called the African Swine Fever (ASF)! 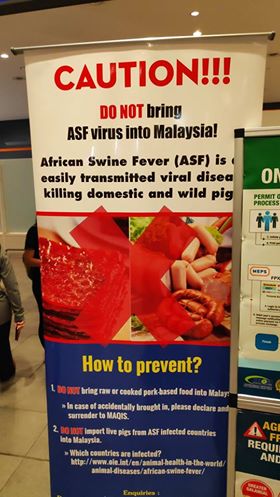 The prohibition sign in airport. Img from our editor.

Strangely, the ban on pork products has been around since… September last year!?

This is because the breakout of ASF started in August 2018 in the city of Shenyang, China and has since moved to Western countries like Bulgaria. It was also reported that South Korea was the first to identify that the virus was transported out of China in pork products. This caused many countries to revise their commercial agreements with affected countries while some countries, like Malaysia, has been imposing bans on imported pork products.

Wait… didn’t we have a pig virus before? The Nipah virus occurred in Port Dickson and was named after the kampung (Kampung Sungai Nipah) in which the disease was first found. This virus, which is carried by bats, had resulted in 1 million pigs being shoved into a pit and shot. And this was done because the death tolls in both Malaysia and Singapore caused by the Nipah virus reached 105 out of 265 cases. We wrote about the virus and you can read it here. The ruins of Kg Sungai Nipah after the pig farms are flattened to prevent the virus from spreading. Screengrabbed from the Journeyman Pictures documentary.

This swine fever only infects domestic and wild pigs

As it turns out, this incurable disease, which is transmitted by ticks and and direct contact between animals, is not a risk to us humans unlike the Nipah virus which infects humans too. However, it is said that we cause pigs to suffer from this disease!

According to Huang Baoxu, deputy director of the China Animal Health and Epidemiology Centre, 46% of this outbreak is caused by humans or vehicles spreading ASF. The disease, which can also be spread through contaminated food and animal feeding, causes pigs to have fever or, worse, death in two to ten days!

There’s a video by EFSAchannel which explains more on ASF:

But if it doesn’t infect humans, then why are we so kancheong about this whole epidemic?? Well, that’s because it can infect our local pigs if the disease arrives here la. And that would cost the local pig-rearing industry about RM2.7 billion in losses!

The Deputy Agriculture and Agro-Based Industry Minister, Sim Tze Tzin mentioned that the ban imposed on pork products is in line with the action taken by exporting countries to control the epidemic.

“We are taking precautionary measures because the ASF disease is easily spread and can cause a very high death rate.” -Sim Tze Tzin for The Star.

And just a few weeks back, the ban has been expanded to airline passengers who carry pork or pork products as hand luggage to prevent the disease from entering Malaysia. This is because locals and tourists, who are reportedly expected to arrive in Malaysia from China, Macau and Hong Kong, would usually bring pork products as gifts. Uh… maybe not like this. Unedited img from haddocknews.com

If airline passengers are found with those products especially from countries like China, Mongolia, Belgium and Hungary, among the other countries listed, those products would be confiscated and destroyed according to the standard operating procedure. And worse comes to worst, you might be charged with RM100,000 fine or jailed not exceeding six years or both.

NAH, BACA:
Who is this Aussie politician who pissed Malaysians off by talking about Bersih 5? ಠ_ಠ

Then where are we gonna get our lap mei from?

We understand that this outbreak has caused worries everywhere. But fret not, gais. Sim mentioned that Malaysia only imports 7% of pork meat and relies heavily on local pork meat. And our local pork and pork-related products are safe to consume, according to the Federation of Livestock Farmers’ Associations of Malaysia.

The deputy president of the association, Tan Kuang Liang, mentioned that this is because pig farmers in Malaysia adopted a new and hygienic farming methods and don’t import any species of the livestock or raw pork from China.

“All of our members’ pig species are from the United States. We use feed originated from Argentina and Brazil.” – Tan Kuang Liang for The Star. Wahliao, does that mean we have to pay more to buy local pork?? Tan assured that there is enough supply for Chinese New Year and that there won’t be any drastic price hike due to this outbreak.

Eh, but what about lap mei (waxed delicacies)? According to Yue Sang Loong Sdn Bhd, importer and supplier of variety of lap mei, dried seafood and Chinese medicine, most lap mei on sale in Malaysia are imported from Hong Kong! Waitamin… isn’t that where the outbreak is from?? The much sought after delicacy during Chinese New Year, lap mei. Img from theMEATMENchannel

Chill, gais. Yue Sang Loong’s director, Teng Sin How mentioned that Hong Kong made lap mei is still the preferred choice among Malaysians for its taste, aroma texture and presentation. And if you’re one of those who prefer this type of lap mei, don’t worry cos Teng said that lap mei is safe to eat during Chinese New Year… although it is from Hong Kong.

“Lap mei is not raw meat. They are processed and cured. More cooking is needed before they are served.” – Teng Sin How told The Star.

This means that although ASF outbreak is out there causing countries to impose bans on pork and pork products, ugaiz can still enjoy your lap mei… and Chinese New Year.

With that, we wish you a Happy Chinese New Year!