*The picture above shows 2 people from the UM Nipah Virus Encephalitis Investigation Team, one of whom we talk about in our article below (Dr Tan Chong Tin, the one further behind).

Mention the worst diseases the world has ever seen and you will hear scary names like smallpox, the bubonic plague, SARS, bird flu, and even Ebola, but how often does the Nipah virus strike fear into the hearts of all who hear it? Not often at all right?

Well that’s because the Nipah virus never became the killer virus it could have. We’ve actually talked a bit about the virus in a previous article but recently, an article was going around about how the Nipah virus had the potential to become a pandemic (which is basically an epidemic but on a global scale), but because one man was willing to break a few rules we were able to stop it. When Dr Chua Kaw Beng was a still just a virologist in training at University Malaya in 1999, he stumbled upon the Nipah virus, which was already killing people. The problem is, while he realised the threat, no one else would, not even his own professor. In fact, the gomen had already started to try and deal with the situation by trying to eliminate what they believed to be the carriers – mosquitoes. Still, Dr Chua wasn’t convinced, and with the whole world against him, he decided to go rogue and SMUGGLE a sample of the virus into the US!

There in the US, armed with the facilities of the Centers for Disease Control (CDC). He was finally able to confirm that this was in fact, a new, deadly virus . And armed with the evidence he was finally able to convince the Malaysian gomen that mosquitoes weren’t to blame. But one interesting thing about this story is how they found out what animal was spreading the virus.

It all started in a farming village in Port Dickson Just look at at that….grotesque ball of death. Image from keywordsuggest.org

Symptoms of the Nipah virus include fever, breathing problems, and kepala pening/pusing problems. The virus is also associated with inflammation of the brain, and can quickly cause a person to fall into a coma. And the reason why this virus is so deadly is that if you get it, there is a very high chance that it will end in DEATH. On average, it has a mortality rate of 74.5% (meaning that out of 1000 people infected by it, 745 of them have died).

While the Malaysian gomen back then was sure that mosquitoes were the cause of this outbreak, Dr Chua, and another guy (who had been treating the people infected by the then-unknown virus) Dr Tan Chong Tin, realised something about the patients – that none of them were Muslims.

“If the disease was coming from mosquitoes, you would have Muslims, Hindus and Christians getting sick.” – Dr Tan Chong Tin, as quoted by National Public Radio

But how do you tell what animal in the animal kingdom is responsible??? Well, the Nipah virus is actually named after the village in which the disease was first found, Kampung Sungai Nipah. And this village (and the villages surrounding it) was known for one thing, pig farms. Lots and lots of pig farms. 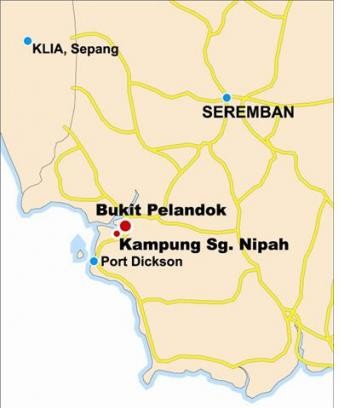 Nearby Bukit Pelandok was said to be the biggest pig farming community in Southeast Asia. Image from mysinchew.com

Both Dr Chua and Dr Tan could at least agree on one thing: that the cause was not mosquitoes. Noticing how dire the situation was and no one was willing to listen to him, Dr Chua got his professor to send him to the Centers for Disease Control and Prevention lab in Colorado, USA on the pretext of studying mosquitoes. Instead, he wrapped the deadly virus in a special packaging, and brought it on his carry-on luggage onto the plane.

It was there in the USA that he discovered this virus was actually a type of paramyxovirus, one of the most contagious viruses on the planet, and a virus that comes from livestock! And Dr Chua wasted no time telling our gomen.

How in the world did these pigs become so deadly?

In all fairness, the Nipah virus did not originate from pigs. It’s generally agreed by scientists that the virus first came from bats. The reasons actually have something to do with humans. If you’re wondering if this virus is new, it actually isn’t. These Nipah virus-carrying bats were always around, but deforestation drove them from their homes, and closer to the pig farms. But it’s not like these bats were like vampires and were going around biting and infecting pigs. The Nipah virus was transferred from bat to pig because sometimes these bats don’t finish the fruits they eat, and it drops to the ground. Pigs would then eat these contaminated leftovers and get sick.

NAH, BACA:
Wait... how did 6 Bomba men die trying to rescue one teenager?

Another factor that contributed to this was that back in the 90’s our economy was doing quite well, so our quality of life was improving, and people could afford to eat pork more often than usual. So with more demand came more supply. Pig farmers started to make their pig production more efficient, and one of those more efficient ways were to pack more pigs into the space they had. But this also meant that if one pig kena virus, it was a lot easier for the other pigs to kena also. And subsequently, the people who took care of these pigs.

“The way people grow their food has changed; so has the way diseases spread.

Agricultural industrialization was part of what triggered the outbreak.” – Dr Tan Chong Tin, as quoted by National Public Radio

And to be fair it’s also possible that pigs were the ones who ended up spreading the disease simply because of the presence of pig farms, because later on the virus was also found to be present in other animals like dogs, cats, horses, and even goats. 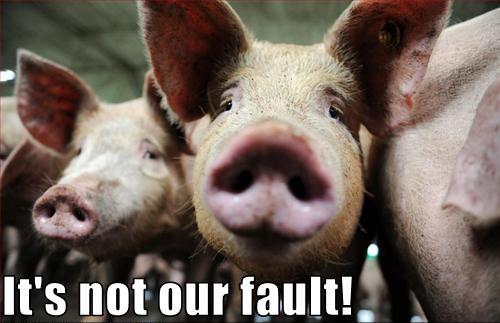 This however, wasn’t the end of the story, because what happened next would change the entire pig-rearing industry of Malaysia.

To eradicate the virus, the Malaysian gomen killed 1 million pigs

As soon as Dr Chua presented his evidence to the Malaysian gomen, they finally listened and did something that goes along the lines of a massacre. “Malaysia’s army moved in for the country’s biggest-ever animal culling.

Almost 1 million pigs, shoved into pits and shot.” – A documentary about the virus by Journeyman Pictures

A word of caution to anyone who wants to watch the documentary, some of these scenes are quite disturbing. In fact, some of the people involved were pretty affected from the killlings they had to do as well.

The documentary also mentions the gomen also more or less FLATTENED the whole of Kampung Sungai Nipah, and in the process of all this, destroyed about HALF of the pig industry and nearly causing the collapse of the industry. Naturally many of the pig farmers would have been affected, but what’s worse is it seems that they were not even aware of what was going on at all.

“They didn’t tell us, we weren’t there. We came back (because the area was quarantined) and found everything flattened. They didn’t notify us. We didn’t expect to come back and see it like this.” – One pig farmer, as inteviewed in a documentary about the virus by Journeyman Pictures Example of the destruction that happened in Kampung Sungai Nipah. Screencap from “The New Virus Plaguing Malaysia (1999)”

The gomen did give them some form of compensation in the form of RM50 for every pig that was killed, but this was reported to be wayyy below market value. This eventually led to protests from these farmers and in 2002, five hundred of these farmers decided to sue the gomen. But as far as we could find, the case kept being delayed and the last we ever heard of it was in 2008, still unsolved.

The virus was costly but it could have been much worse

In some ways, the virus could have been dealt with earlier. The gomen had chosen to focus on mosquitoes instead of heed the warning of various scientists (and in some cases telling people to return to their farms when it was still dangerous because they believed they had the situation under control). In fact, this website lists down Malaysia’s handling of the virus as one of the top 10 botched attempts by officials to control epidemics. If you wanna know how bad it could have gotten, the 2011 movie “Contagion” is actually based on the Nipah virus! Image from publichealth.wustl.edu

But on the other hand, the death toll of the Nipah virus in both Malaysia and Singapore back then was 105 out of 265 cases, so people were dying, and they had to act.

“What we wanted to do at the time was just to stop the infection to humans as fast as possible. Whatever it took at the time to get rid of the pigs was being done.” – Dr Aziz Jamaluddin, Director of the Veterinary Research Institute, as inteviewed in a documentary about the virus by Journeyman Pictures

And even if our pig industry suffered a lot of losses, the crisis actually led to major changes in the way we reared pigs. Pig farming in Malaysia has gotten a lot cleaner, and since the 1998 incident, there have been no further outbreaks of weird, deadly viruses here.

And if not for the efforts of people like Dr Chua and Dr Tan (both of which became part of a larger task force to tackle the virus), it could have been a lot worse. The Nipah virus was one that we didn’t seem prepared for, but lucky enough to have been dealt with sooner rather than later.