Out of all these schools, English Schools were seen as the most prestigious ones because they were located in the cities and charged high fees. So, only the rich got to receive a higher-quality education, which means most Malays were disadvantaged since a large majority of them lived in rural areas. Not just that, but many British officers were disinterested in advancing the Malay language or Malay education because it threatened the status quo.

However, that is not to say that all British officers were horrible self-serving people who wanted to hoard all power to themselves. Richard James Wilkinson is a good example.

Richard James Wilkinson was a very well-educated man… except with horses. 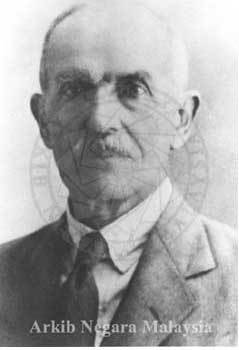 Richard James Wilkinson was born to a British consul in Greece on 29 May 1867. Growing up in a metropolitan place where many European languages were used, his linguistic abilities were nurtured since he was a child. He picked up French, German, Spanish, Italian, Greek, and finally Hokkien when his family moved to Macao in 1872 when he was 5.

Wilkinson was educated at Trinity College, University of Cambridge. After graduated from Cambridge, Wilkinson took an entrance exam to get an appointment in the Indian Civil Service (ICS). Like the smart boy he was, he had an easy ride across all portions of the exam… until the one where he had to ride a horse.

“[The] ICS required its recruits to pass a riding test since they would be touring their districts in India on horseback. Wilkinson failed this test and so could not make his career in India.” — excerpt taken from the research paper by J.M. Gullick. As a result, he could only go to places where he wouldn’t need to ride horses. He came to Singapore in 1889 to begin his service and he was subsequently stationed at many other places in Malaya over the years. However, he never intended to stay long here. He continued to study Hokkien because his real goal was to serve in China.

Wilkinson has demonstrated great capability while he was here and this got the attention of William Maxwell, the Chief Secretary of the Strait Settlement. Maxwell wanted to keep him here, so he pandai pandai used Wilkinson’s budding love for Bahasa Melayu to his advantage.

“The first man to put me on the higher paths of Malay study was Sir William Maxwell. He […] brought me into touch with a number of workers interested in Malay.” — R.J. Wilkinson in the Preface to A Malay-English Dictionary (Romanised).

He perfected the Malay-English dictionary.

Wilkinson’s senior colleagues, Frank Swettenham and Hugh Clifford, published ‘A dictionary of the Malay language’ in 1894. However, the dictionary received many criticisms because although Swettenham and Clifford had a good command of Malay, they could not read Dutch and Arabic, from which many Malay words were derived.

To perfect the dictionary, Wilkinson began reading many Malay classics to extract words for his dictionary. He also consulted Malays from Selangor, Singapore, Johor, and Riau, and local craftsmen to ensure the accuracy of the meanings of different words. Furthermore…

“To widen the scope of the trawl through Malay literature, Wilkinson paid ‘good prices’ to obtain manuscripts, often specially copied to meet his needs.” — excerpt taken from the research paper by J.M. Gullick.

The first edition of ‘A Malay-English Dictionary (Romanised)‘ was published in 1902. In the dictionary, the meaning of words was illustrated with quotations collected from books from different time periods. Wilkinson also mentioned in the preface of the dictionary that he hoped that this dictionary would be helpful in ‘the interpretation of documents, and in giving more precision generally to translations in Courts of Law‘. An abridged version was published in 1908. The first version vs the abridged version. Photo taken from the National Library of Australia/Archive.

In 1918, Wilkinson began rewriting the dictionary in retirement. This revision ensures that all the words are in Rumi order instead of a Jawi alphabetical sequence of words. Wilkinson made these changes so that the Malay language can be more accessible to non-Malay Asians, thus elevating its status. Perhaps Wilkinson can do an interview with Oprah. Meme created from imgflip.

Wilkinson wanted to modernise the education system in Malaya.

When Wilkinson came to Malaya, Malay education was only limited to three elementary subjects. Therefore, he acted to deal with the lack of suitable reading materials for Malay students when he was appointed as the Acting Inspector of Schools for the Federated Malay States. He reprinted many Malay classics and established small school libraries. Wilkinson also commissioned new textbooks that focused on familiar Malayan topics instead of British things.

Wilkinson then tried to modernise the education system here by focusing on training Malay teachers, which led to the establishment of the first Malay teacher’s training college at Durian Daun in Malacca. However, the college wasn’t successful in this regard because Governor Mitchell and Frank Swettenham started gaduh over this college – Swettenham favoured a more practical course whereas Mitchell preferred a literary curriculum. Wilkinson then tried to open another training centre in Taiping in 1913 but it failed again. Unlike many British officers who saw the involvement of Malays in administration as a threat, Wilkinson wanted to improve the Malays’ English so they can be qualified to serve in the Malayan Civil Service and put in place an educational establishment that will take in Malay aristocrats and also commoners who showed ‘marked ability’. He fought to establish the Malay College of Kuala Kangsar with the backing of Sultan Idris of Perak amidst hostility from other British officers. Wilkinson’s success was also his downfall…

Wilkinson had to take leave shortly after the establishment of KMKK due to his ill health. When he came back around 1906, William Thomas Taylor, the new Resident-General for the Federated Malay States, sabotaged him by claiming that he did not deserve any credits for the success of KMKK since he was on leave.

Wilkinson was soooo angry, he began protesting this to Anderson, but because Anderson was besties with Taylor, Wilkinson lost in this battle. (Fun fact: Taylor was so petty, he said Wilkinson’s illness has made him giler so Anderson shouldn’t listen to him.) Wilkinson never had a chance to do anything for Malay education again when Anderson merged the Straits Settlement and Federated Malay States education department in 1906, and did not appoint Wilkinson for any roles.

This is probably how Wilkinson felt ;-; Gif from Giphy.

Wilkinson was reallocated to Sierra Leone after his dramatic years in Malaya. However, his love for the Malay language did not diminish. After retiring in 1912, he used his remaining time to work on the revised edition of the dictionary while living on Mytilene on the Island of Lesbos (we were going to make a joke, but actually… ). When WWII broke out in 1939, Wilkinson moved to Smyrna (now Izmir) in Turkey. He passed away on 5 December 1941 at the ripe old age of 74 but his legacy definitely stays until today.

Share this article:
NAH, BACA:
6 Malaysians who restored our faith in humanity