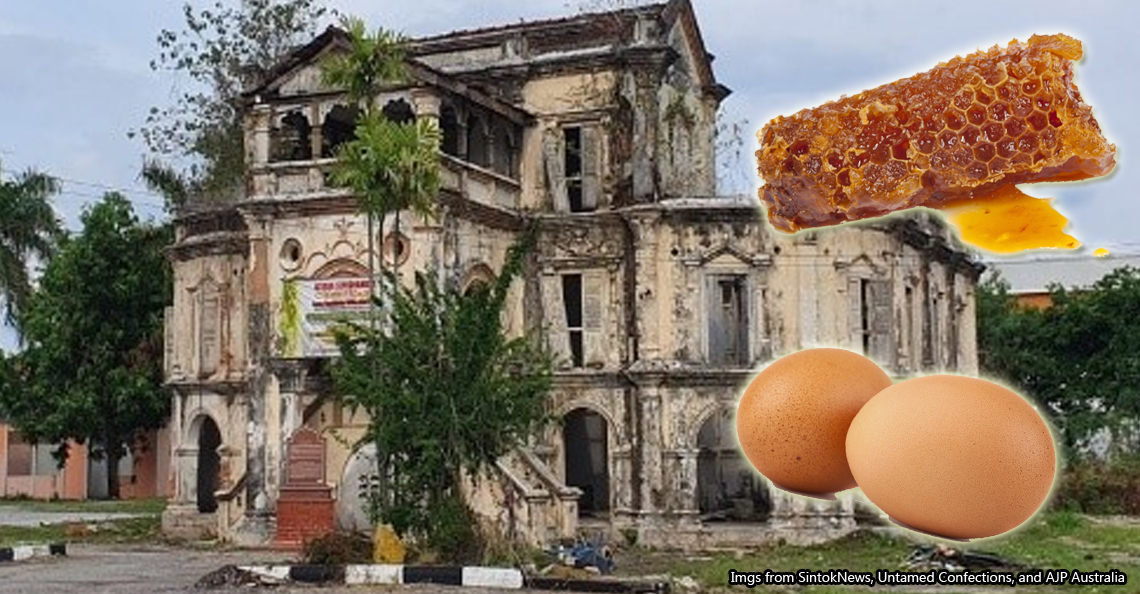 If you spend a long enough time looking for parking in the city center of Alor Setar, Kedah, you might stumble across this seemingly abandoned building: It may not look all that impressive at first glance, but that used to be a castle. Called Istana Sepachendera, it was built by the late Sultan Abdul Hamid Halim of Kedah for his consort, Che Sepachendera, sometime in the 1880s. But being where a Sultan used to live isn’t the only interesting thing about this ruined castle. Apparently, according to local legends…

The castle was built using eggs and honey!

Yes, the building is made of stone, and it’s not just a show piece. The Sultan and Che Sepachendera spent several years living in the structure as well. It has three floors, with the highest floor being exclusive to only Sultan Abdul Halim and Che Sepachendera. It contains their private bedroom and a private balcony, with the rest of the space being an open roof they can walk around on. During her time here, Che Sepachendera gave birth to two princes and two princesses, and it is believed that they lived on the second floor of the castle. It seems to follow an open bedroom plan (think of it like a dorm), with the only two other rooms on the floor being a toilet and a walk-in closet for Che Sepachendera’s costumes. This floor is where the main entrance connects to, and where you’ll end up if you use the huge double staircases at the front of the castle.

The ground floor has a separate entrance and function: while the top two floors are living spaces, the ground floor is more for entertaining guests (like for events and balls). During normal times, it’s where the servants and cooks live. The layout is the same as the second floor, but instead of the walk-in closet, there’s a kitchen instead. All of this, plus the fact that the structure is still standing today, makes the story of it being built using eggs and honey more surprising. According to Datuk Dr Wan Shamsudin Mohd Yusof, a historian in Kedah,

“I was made to understand that egg whites and honey were used in the walls and the roof of the building to strengthen the structure, for ages. I believe that the substances also functioned as a glue to adhere as well as reinforce the bond between cement and stones in the building.” – Datuk Dr Wan Shamsudin Mohd Yusof, to Berita Harian.

That may sound a bit fishy to some people, but after digging around a bit, we found that…

NAH, BACA:
Kedah plans to mine rare earths without cutting down trees. Here's how it might be possible.

Using food to construct buildings weren’t that uncommon back then

Most stone constructions use mortar, which is the stuff we paste between bricks or stones to keep them together. A typical mortar recipe today includes cement (the gray powder), water, and some kind of aggregate (sand or gravel). The cement and water acts as a sort of glue that holds the aggregate together, and when the water dries out, the mixture sets and becomes strong, holding the structure in place. This is the basic concept behind stone construction, but in older times, cement wasn’t readily available, so some alternatives were used to bind everything together.

One of them was egg whites. Some of the grand churches in the Phillippines were said to have incorporated egg whites, and it was said that so many egg yolks were left over that traditional Filipino desserts were developed to use more egg yolks. For a more local example of an egg white building, the Alwi Mosque in Perlis is one. The construction of the mosque took three years (from 1931 to 1933), and the delay was said to be due to difficulties in sourcing the massive number of eggs needed. Kellie’s castle in Perak was also said to be constructed using egg whites, brown sugar, and honey. ‘Said to be’ ar. We didn’t say it. Img of Kellie’s Castle by Nsaadah, Wikimedia Commons.

Egg whites were also used in ancient Chinese buildings, and besides those, the Chinese had also used several other interesting ingredients in their mortar (called tabia mortar), like sticky rice soup, the juice of some fruits and vegetables, and even animal blood in place of cement. The sticky rice soup mortar was particularly researched: it was said that tombs built with it were strong enough to withstand bulldozers and grave robbers’ drills.

So it’s not entirely impossible for Sepachendera’s castle to have been built with eggs and honey. You can still visit the castle today, although…

The castle had fallen into a state of disrepair, with no plans to revive it Some pictures show the state of disrepair the castle had fallen into. Img from Iluminasi.

You can probably guess the current condition of the monument by the photo from the start of the article. After Che Sepachendera’s death in 1907, the castle was passed on to her children, and it became part of several nearby schools as well as a fire office during the Japanese invasion. But the last known use of the building was as a prayer hall by a nearby university college in the 2000s. It hasn’t been used since then, and today the castle stands empty, although it still belongs to the state government.

The Kedah Historical Association had in 2014 urged for the state government to restore it and convert the castle into a museum, but so far, nothing seems to have been done to the castle. On another note, we heard that if you ask the guards nicely, they’ll let you go in and take pictures, so if you do go, please lick the walls for us and tell us what they taste like.

Actually, don’t do that.