Maybe you’ve heard of Malay settlements outside of the Malay archipelago that we’ve written about before, like the Cocos Malays in Australia and the Cape Malays in South Africa. That in itself wouldn’t be very surprising as the Malays were known as sailors who travel a lot back in the day. But besides moving around by their own will, sometimes Malay settlements can start from, say, being cheated by Dutch colonists.

If that sounds fairly specific, it’s because that was the backstory for a settlement of Javanese Malays in South America, in a republic named Suriname.

It all started with the abolishment of slavery in Suriname

Far away, somewhere in South America, there is a republic named Suriname, populated by not only Latin Americans, but people from Africa, Hindustan (India), China, and even Malay people with Java blood in them. The Javanese are still considered as Malays as according to historian Malim Ghozali, back during the time of this story the area they came from was part of the Malay archipelago, which have yet to separate into the nations that we know today. 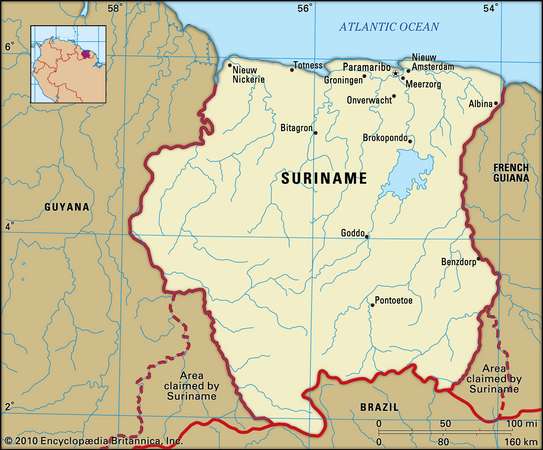 Suriname is considered as part of the Caribbean, bordering Brazil. Img from EncyclopediaBritannica.

As for how they ended up in Suriname, it had something to do with the abolishment of slavery there in July 1863. This caused a shortage of labour to tend to their plantations, resulting in no crops to harvest. Suriname’s economy plummeted, and at that time, it was colonized by the Dutch (through the Dutch East India Company) after the British gave up their sovereignty of the area through the Breda Treaty of 1667. So the Dutch moved these people in stages from 1900 to 1940. During this time, it was estimated that as many as 32,000 Javanese Malays were taken to South America to work in their Suriname plantations.

Due to population density and natural disasters in Java, many took up the offer

You might have heard that the Indonesian government recently announced that they’re moving their capital from Jakarta to Kalimantan due to the high population density. But you should also know that the Javanaese archipelago’s population density had been high since the 1800s. That, coupled with the constant threat of natural disasters like volcano eruptions, became factors of why many of the locals took up the offer to work in Suriname. Number of major volcanoes in Indonesia. Img by Suntoyo Suntoyo.

So they moved out by the tens of thousands, and it was said that if it weren’t for this mass migration, the Javanese archipelago today (Jakarta, Bandung and Surabaya) would probably be even more packed with people. To illustrate, the people living in the Javanese archipelago today number 150 million, or about 54% of the total number of people living in Indonesia. There’s so much people that some places in Jakarta had been sinking at a rate of 25 cm a year. Where Java is at. Img Lonely Planet.

Getting back to the migration, it wasn’t really a relaxing cruise over the ocean. The journey by sea from the Javanese archipelago to South America is pretty far, taking months on end. It is on these long cruises, on ships packed with hundreds of people, that tens of deaths occurred, with many falling sick as soon as they reached the South American republic.

NAH, BACA:
The govt took RM54 billion from Petronas, and Petronas might not be able to afford it.

The laborers became contract workers who ‘owe’ the Dutch company

The Dutch rationale of bringing Malays from the Javanese archipelago to Suriname might have been the similar environments between the two places. The crops in Suriname are also not much different from where the Malays came from, like sugarcane, cocoa and coffee. Some even went into bauxite mining. Due to the abolishment of the slavery system, the Dutch had to pay the Malay workers, but on the condition that they became contract laborers. The pay was pretty low, even for that time. Male workers over 16 years of age receive 60 cents a day, while female workers above 10 receive 40 cents a day.

These Malay workers fell into a sort of indentured labor situation, as the Dutch had a deal with these workers before taking them on the cruise. Based on the deal, they have to work under contract for five years, six days a week, for between 8 to 10 hours a day. Once their contract ends, they would have the right to return to Indonesia, and the return journey would be sponsored by the Dutch.

While there are some who planned to permanently migrate to Suriname, most had agreed to work for a few years there before being released from their ‘debt’ under the Poenale Sanctie act, which was the colonial law under the Dutch East India Company. Javanese Malays in Suriname in the early days. Img from Think Archipelago.

However, their wait to return home never ended. The Dutch did not honor their side of the deal, due to their financial situation the the war happening across the globe. So they waited year after year for the time when they can finally return, but it never came.

Life has to go on, however, so they eventually learned to make themselves used to the place which could be where they would live forever from then on. Today, the Malays in Suriname is said to be either the fourth or fifth generation from the original settlers. Despite that…

The Suriname Malays kept their tradition, even after all these years

According to a journal from the Leiden University in the Netherlands, as many as 72 thousand Surinamese people are of Javanese descent, and are Muslims. That’s about 15% of the Suriname population. Even though several generations had passed since the colonial days, a recent visit by historian Malim Ghozali showed that their Malay-ness had not faded: their way of living, their food, and their culture are still unmistakably Malay. “These people appeared to be locked within a time capsule,” according to Malim Ghozali.

This is evident from the way they dress, their daily meals, the language they speak, their habit of carrying bird cages along with them as a sort of entertaining radio, and the music they play during festivities, which uses instruments like kompang and rebana besar. They also practice the Silat Tapak Suci in Suriname (as well as in the Netherlands).

Even though most Suriname Malays today had never set foot on Java, they still want to be known as Malay people from the island of Java like their ancestors. Many had expressed that besides going on a pilgrimage to Mecca, their second preferred destination would be Java.

“In the Republic of Suriname, there are Malays with Javanese blood taken there by the Dutch from the land of the Javanese, the land of Andalas, and from the Malay archipelago around the 1870s, as indentured laborers.

These people still long for the land where they came from,” – Malim Ghozali, at a [email protected] session titled “Diaspora Melayu Cocos dan Suriname”.