Earlier this month, a developer named Ting Pek Khiing came out to the media and claimed that he will start a RM30 billion project in Langkawi. The project, called Langkawi New City, was planned to be built on 81 hectares of reclaimed land on the west side of the island, and it would involve the construction of some 30,000 high-end condominium units, commercial centers, and parking spots for ocean liners and yachts, among other things.

“This project is bound to be the biggest ever development of such kind in the northern part of Peninsular Malaysia… This development would be akin to that in Dubai. This project would get more people to invest and stay here for a longer period, rather than for just one or two days,” – Ting Pek Khiing, as reported by NST.

While Ting did not disclose which companies in his group will be doing the building, he told the media that the Prime Minister Tun Dr Mahathir Mohamad himself is expected to launch the project the day after the announcement.

But even without Tun M launching it, a RM30 billion project on Langkawi is not something you overlook. By comparison, the KLCC cost about RM6.36 billion to build, and the construction cost of Putrajaya was RM11.83 billion… at least according to former Prime Minister Abdullah Ahmad Badawi in 2008.

So who is this guy starting a project almost three times bigger than Putrajaya, and launched by the Prime Minister some more? Well, younger generations might not have heard of him, but… A younger Ting Pek Khiing. Img from The Edge Markets.

Ting Pek Khiing was actually quite famous back in the day, and looking at his history, him claiming Tun M will launch his project might not seem too far-fetched. Ting reportedly came from a poor family in Bintangor, Sarawak. He started his business career by helping his father sell fruits in his teens, but he soon later turned to the construction business, building his reputation through efficiency and hard work.

His fame soon reached Taib Mahmud, then the Chief Minister of Sarawak, and according to one version of the story, Tun M saw a house that Ting built near Taib’s residence and offered him a project to build a five-star hotel in Langkawi ahead of the Langkawi International Maritime and Aerospace (LIMA) expo in 1991. Another version said that it was Taib himself who recommended Ting to Mahathir, but regardless of how he got the job, Ting managed to deliver, completing the Sheraton Langkawi Beach Resort in under 100 days.

This success was perhaps the start of other huge projects granted to him by the government. In 1994, Ting secured a RM15 billion project through one of his companies, Ekran Bhd to build a hydroelectric dam in Bakun, Sarawak. Wembley Industries Holdings Bhd, another company of which Ting owned 33% of, was tasked with the building of Plaza Rakyat in KL. However, both these projects didn’t quite hold up to his earlier reputation: the Bakun hydroelectric dam project was plagued by various issues (one of them was said to be spirits on the burial grounds over which it was built), and both the dam and Plaza Rakyat project was hit by the Asian financial crisis and abandoned.

Ekran and Wembley went into receivership (read: can’t pay their debts), and in 2010 Ting was declared bankrupt by the KL High Court. To add insult to injury, the following year the Sultan of Selangor, Sultan Sharafuddin Idris Shah revoked Ting’s Datukship because of that.

“The Sultan of Selangor had decided to revoke the award for (Dr. Ting) Pek Khiing after considering that the declaration of bankruptcy on him is not fitting for someone holding an award and is contrary to the status of Darjah Kebesaran Mahkota Selangor 1966,” – Datuk Mohammed Khusrin Munawi, Selangor’s State Government Secretary, translated from Utusan Online.

The gist. Gif from Giphy.

Ouch. Anyway, after his failures, Ting stayed under the radar for 16 years… until very recently, when he announced his Langkawi New City project. Under the circumstances of his announcement… 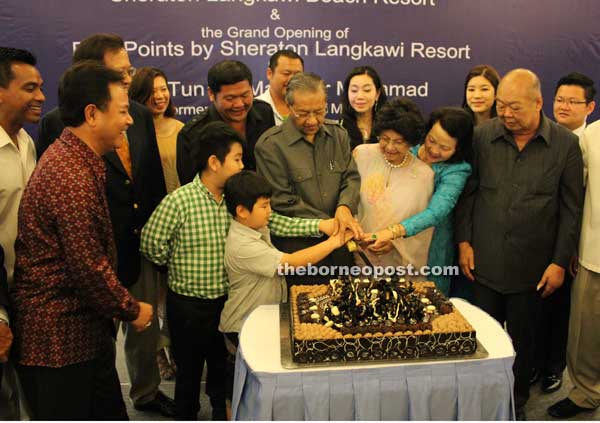 Mahathir and Ting during the launching of Four Points by Sheraton Langkawi, in 2011. Img from the Borneo Post.

People who knew of his past relationship with Mahathir might find Ting’s recent project suspicious: the announcement came out of the blue a few weeks after Tun M’s return to power. Some saw the project as the resurfacing of crony capitalism. In fact, according to UM academic Awang Azman Awang Pawi, Ting was known as a crony of Tun M. He had since warned the PH government of cronies, as they could spell trouble for the new government.

“His reappearance is worrying as there are concerns that the issue of cronyism will repeat itself. This would erode the trust and confidence of Malaysians, who are looking to build a country that is more transparent. They certainly do not want such elements to be rampant. The PH government has yet to fully stabilise, and they should be wary of such business allies which can erode the rakyat’s confidence,” – Awang Azman Awang Pawi, to FMT.

Ting’s backstory in the previous header mentioned that he dabbled in fruit-selling and construction, but that’s just part of the story. Ting also went into the timber trade, through his main company at that time, called Woodhouse Sdn Bhd. It was this timber business that was said to connect him with Sarawak’s controversial Chief Minister, Taib Mahmud, in the first place. Through this relationship, Ting’s timber profits (a significant portion of which was said went back to Taib as rent) bloomed, with Ting once heading the sixth largest private concession holding group in Sarawak, having licenses to harvest over 310,000 hectares of timber. Besides being accused as Taib’s and Mahathir’s crony, Ting had also allegedly done business with Tun Daim Zainuddin, former finance minister (and now one of the Council of Elders), both having been said to work together in the past to ensure the Bakun Project went to Ekran Bhd, which you may remember as Ting’s company from before. Another source had said that the awarding of the Bakun Project to Ekran was done without competitive bidding as well, and the announcement for it by Tun M came “a day after he attended a wedding dinner for Chairman Ting’s son”. 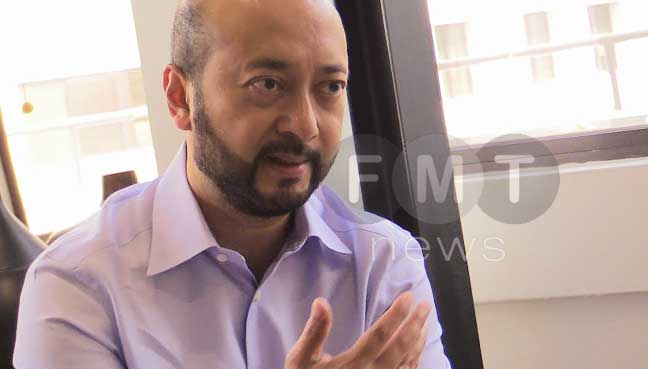 “I wish to explain that the project was once proposed when I was made MB the first time under the then Barisan Nasional (BN) government. Ting had then proposed a reclamation project to build the property which would be sold to local and foreign buyers. However, that proposal was never followed up with a deposit payment, in line with the state’s conditions for a mega project of this nature,” – Mukhriz Mahathir, as reported by the Malaysian Reserve.

Tun M, despite being (claimed to be) the one to launch the project on June 1st, had said that it’s not up to him to approve the project. As Langkawi is part of Kedah, it’s up to the Kedah government on whether or not to approve it. He did not discourage Ting from going for it either, as he said that anyone with money can invest in Langkawi if they want to.

“Ting can dream up constructing a Kuala Lumpur-like city in Langkawi and the latter can propose it, but whether it gets approved, it is up to the authorities.”  – Tun Dr Mahathir, to The Sun Daily. 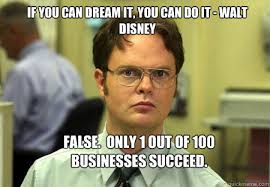 What’s business without a little uncertainty? Img from Qkme.me.

Tun M had also acknowledged Ting’s bankruptcy during Najib Razak’s time, and saw this move as an attempt to revive his own business. However, he had said that that was Ting’s business, and whoever wants to do business in Langkawi are welcome to do so. Tun Daim Zainuddin, on the other hand, had advised Ting to stay retired and not tarnish the government’s image.

“My advice to Tan Sri Ting is: ‘Get well and best to stay retired. Please help the government by not tarnishing its image‘. If he is serious, let his children do the project. But show the money,” – Daim Zainuddin, as reported by MalaysiaKini.

In a statement to MalaysiaKini, Tun Daim had also said that he would advise the government to award all projects via open tender in the future. Awarding government contracts through direct negotiations and inflating their prices is a key source of corruption in Malaysia according to Transparency International Malaysia (TIM), and they estimate this corruption to have cost the country at least 4% of its GDP every year since 2013. In the past, projects such as the MATRADE expo and the East Coast Rail Link (ECRL) project had been alleged of being awarded through a closed tender.

Regardless of that, it would seem that Ting’s announcement may have been a case of counting his eggs before they were hatched, as… Ting will submit a fresh application. Img from the Borneo Post.

In response to Mukhriz saying that he would need a deposit to go with his proposal, Ting had said that he had made submissions to three different Kedah state governments between 2008 and now, but he was not aware that a deposit was needed.

“I don’t know. This is a billion-dollar project and what deposit do they want? They should let the developer spend the money on the job and not to keep the deposit in the bank,” – Ting Pek Khiing, to the Borneo Post.

Following the announcement of his huge project, various parties concerned with Langkawi’s natural heritage had spoken out against the proposed construction of Langkawi New City on the island’s reclaimed land. They have noted a lack of research on the impact the project will have on the people and ecology of Langkawi on behalf of the developer as well as no Environmental Impact Assessment (EIA) approval. Land reclamation projects, like this one in Penang, had came under fire by environmentalists. Screengrab from Penang Property TV.

“Are we emulating Phuket or Bali where in decades to come, the fragile environment may be damaged and tourists would stray away? Or, is there a need for sustainable tourism to take precedence?” – Anthony Wong Kim Hooi, to the Sun Daily.

Eric R. Sinnaya, vice president of the Malaysian Nature Society (MNS), had stressed that while Ting may have meant for the project to help Langkawi by bringing in more tourists, protecting the island’s ecology is just as important in attracting tourists. He pointed out that although Langkawi had went through rapid development in the past and tourism flourished, the environment suffered. This may be a problem for new age tourists who are concerned about Langkawi’s fragile environment.

Wow. Transparency does seem like a lot of work, doesn’t it?