Yu might be familiar with shopping for a lot of things online like clothes, electronics and toys. But have you tried buying seafood online? According to some fishmongers in Seremban, young people like us now prefer to buy seafood online instead of the pasar malam/pagi.

It shouldn’t come as a surprise that we want our stuff delivered to our doorstep. But this is not just any ordinary online seafood retail delivery service. This involves AUCTIONS! Something like this but with tech. Image from CNN.

In fact, seafood sellers in Seremban are now joining the legion of fisheries who sell their seafood via Facebook Live auctions. But as new as it sounds to some of us, this thing has been around for some time.

It’s apparently been a huge thing in Malaysia for the past year?! To learn how this thing works, we caught up with Kelvin of Fully Fishery to find out more about how his business reportedly pioneered bringing seafood from fish net to the Internet.

Like many Malaysian online fish auctioneers, the inspiration came from a trend in Taiwan, where things are auctioned off on Facebook Live instead of the markets. You can even find similar things going on in Singapore and Australia but it’s slightly different as it uses a dedicated website for online seafood auctions.

And the trend has caught on so quickly that there’s even a Facebook group containing shared posts of these live videos.

From the Facebook Live videos we’ve observed, the auctioneers are generally seen with a tray where they place the fish while talking to the camera. Next to the tray is a digital clock to time the auctioning of a particular fish and a phone for the auctioneer to read out the bids that appear in the comments. And here’s the nice part (for you, not the fish): most of the time, bidding prices are lower than fixed prices.

“Bidding for every item starts from zero.” – Kelvin.

If a customer bids higher than the fixed price for that particular item, the fishery would add more items to the cart for the customer. Kelvin with one of his catches. Image from Kelvin.

Then, the highest bidder within the stipulated time wins the auction and has to then slide into the DMs of these sellers – or reply to the admin who messages them – to exchange contact details and arrange for the payment (usually online bank transfer) and delivery. But there’s also the problem where the winning bidder doesn’t pay, something Kelvin knows too well.

“And some people after bidding, they don’t make payments.” – Kelvin. Of course, the one who doesn’t shell out the money will rugi because the auctioneer will put the unsold fish back in the game (and hopefully go to someone more deserving a.k.a who actually pays). And since Fully Fishery also stocks separate supplies for markets, restaurants and online retail for slightly higher fixed prices, so it’s not like their main business got affected dy lor.

Kelvin told us that the fishermen he works with keep the fish that they catch in high-tech freezers to retain freshness. But businesses like his usually don’t have to worry about super stinky freezers (y’all really don’t wanna know about the Cilisos freezer) because his fish are usually always sold immediately.

“Within two hours, we can freeze the fish. Then we sell at night. Our sales volume is big. So the turnover is very fast. They won’t be kept at our place for long.” – Kelvin.

But sometimes, doing Facebook Live auctions can be a bit of a headache

As Kelvin mentioned, there’s a pretty high demand for his products, yielding about 15-20% more in profits. This is mostly in part thanks to Facebook Live’s for reaching more pairs of eyeballs (up to 8,000) in a shorter time, compared to doing it in person at a pasar where he needs to keep yelling and shouting to fish for attention.

“Facebook Live can reach people all over Malaysia easily and enables interaction between us and our customers.” – Kelvin Maybe that’s why the demand is so high.

Another minor positive for using Facebook Live for fish auctions is that it removes the need for a middleman. With costs now being lower, this may explain why prices can be lower too, as seen from the low bid prices. But it’s not all smooth sailing.

Apart from appealing to buyers who still wanna touch the fish while buying, Kelvin pointed out that competition is now at its peak and his posts have even suffered some shaming attempts by cybertroopers (though he doesn’t know if they’re linked to competitors or are just trawls). 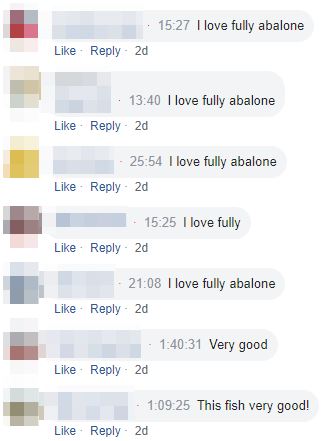 We tried searching for the negative comments, but we’d have to dive deeper since they were probably clouded over by the positive ones.

Kelvin also added that some courier services have room for improvement, since some of them don’t deliver nationwide. Consequently, the customer base is limited to certain states despite the wider reach of live video audience. Like in Kelvin’s case, the East Coast and East Malaysian states are left out.

And also the customers are mostly those fluent in Mandarin, although Kelvin said that his business has non-Chinese dialect speaking customers too (no wonder people say Chinese fellas sellfish). But probably not enough to tip the scales because the live auctions are conducted in Mandarin, with a little bit of English translations by some.

“Fisheries are (generally) not good at speaking English.” – Kelvin

But don’t worry. When we asked him about whether he has plans to hire someone who can speak in English or Malay comfortably, he said he has thought of it and might consider it in the future (so if you love selling fish and can speak either language, here’s your chance *ahem*).

If not, then maybe you cod check out the many Facebook Live seafood auctions and see if this works for you. last one we swear

Share this article:
NAH, BACA:
13 Things People From Klang are Sick of Hearing