Imagine a world without security guards where anyone can just simply enter buildings, housing areas and school compounds. While that might sound scary to you, it might be happening to Malaysian schools! Well, at least according to the Malaysian Safety Industry Association (PIKM), an association for security companies.

Just recently, PIKM claimed that the Finance Ministry’s rumoured action to implement the Contract for Services (CFS) policy – where security guards will be hired directly from companies without going through a middleman or contractors – may cause some 50,000 security guards and support staff to lose their jobs, particularly those who work in schools.

“This will also mean that 40,000 school security guards and 10,000 support staff will lose their jobs. There will be huge consequences to the industry if the Finance Ministry decides to proceed with it.” – Datuk Seri Ramli Yusuff, PIKM president told The Star. Ramli (sitting second from left) with the members of PIKM. Img from NST

PIKM claimed that it’s rumoured because, at the time of writing, there isn’t any black-and-white on the implementation of the policy and it has yet to receive clarification from the Finance and Education Ministry regarding the matter. Wait, why the Education Ministry?

Apparently, the policy will be implemented in the govt sector and, according to PIKM’s sources, the Education Ministry will be the first to implement it. In other words, security guards in schools might be affected. PIKM said that this might be a huge deal as…

Schools might not be safe for students and teachers anymore  😮

Just like any jobs out there, security guards are required to follow a certain process before getting hired. Ramli said that security guards in schools are normally vetted to ensure that they’re Malaysians with no criminal records, among other criteria.

They are then required to be trained under the Certified Security Guard module which, according to PIKM’s treasurer Sofia Johari, is a module approved by the Ministry of Home Affairs. So yknow the training module is legit and not syok sendiri la. And guess what? All these are apparently done by private companies! We talked to Sivaranjani Manickam of Parti Sosialis Malaysia (PSM) who claimed that the govt has been outsourcing security guards and cleaners for govt premises to private companies since the 1980s! And these companies are normally awarded with two to three years worth of contracts.

So the total cost to hire one security guard (adding the wages per year with the one-off training and license cost) might be around RM33,400 per year. This does not include other stuff like their uniforms. At the moment, Ramli said that there are roughly 200,000 security guards in Malaysia so you can just imagine how much money the contractors are charging the govt just for security guards! This is why Ramli claimed that the Finance Ministry’s action to implement CFS is believed is to cut costs due to several budget constraints. Sofia explained that if this is implemented, the security budget would be directly given to the ministry. This would then be channeled to stakeholders like schools (instead of contractors) who could directly hire guards.

While this might not seem like a problem to some, PIKM believes that this would put the safety of school children and teachers at risk.

“If this is true, it will put the safety of students and teachers at risk, because when direct hiring is done, the quality is unknown. Whereas with us, all security guards have to go through a stringent selection process.” – Sofia told NST.

And this is not the first time PIKM has raised something like this. Back in February 2019…

PIKM claimed that 12,000 security guards lost their jobs but… that’s NOT even true??

So back in February 2019, the Education Ministry has introduced a new shift system for security guards in schools and PIKM claimed that 12,000 security guards have lost their jobs due to this.

“In the past, we had two guards each for two different shifts, but the new system has reduced the number of guards, resulting in loss of jobs for these workers.” – Former PIKM President, Datuk Seri Mustapa Ali to The Star.

Not only that, he mentioned that the new shift system introduced also meant that the working hours in each shift has been reduced. Previously, security guards are required to work 12 hours per shift but, with the new system, they’re only required to work eight hours only. So, why is Mustapa complaining if working for eight hours is normal according to the Employment Act 1955 anyway? Screengrab from the Employment Act 1955. One of the security guards we interviewed. Click image to read the sempena Labour Day article.

PIKM also pointed out that the security guards who have lost their jobs have been working in the field for so long and may have trouble finding a new one. To make matters worse, most of them come from the B40 income group and are retired police and military men.

However, when we dug deeper into the issue, we actually found out that the Education Ministry has clarified the matter by denying that it has terminated 12,000 security guards. So, PIKM’s claims may not be entirely true.

What actually happened tho, according to the ministry, was that the contract with that particular company, along with other companies, have ended. And with just like any other contracts, the ministry renewed the contracts with those companies besides making some changes to cater to current needs. These changes include the number of shifts and workers.

The ministry also added that it is not involved with the termination and hiring of security guards as the services were obtained from private companies.

While interviewing him, we found out that some companies tend to violate the Employment Act 1955 especially when it comes to their pay and extra pay for working during public holidays. “No double pay. Usual pay. Actually, I don’t agree regarding this. Because normally public holiday is a triple pay. But on rest days, I get double pay. Actually companies’ rules are like that but so many companies don’t follow them (rules).” – Michael told CILISOS.

As it turns out, Michael is just one out of so many other local security guards who have been treated this way. In another separate case, a group of security guards in Penang lodged a complaint with the state Labour Department sometime in February 2018. They claimed that they were forced to work long hours without any days off by their employers.

The group’s spokesman, Muhammad Fazly Md Ibrahim claimed that he had personally worked for four months in a row without a day off and that he could only take a day off if he could find someone to replace him. Another security guard, Musa Shariff said that their pay were deducted when they couldn’t come to work even though they presented an MC for that(!). Musa and Fazly (left and middle). Img from The Star

“I had a colleague who reported in sick and he managed to get an MC from a government hospital but the company still deducted RM474 from his salary.” – Musa told The Star.

This might just be why PSM has recently stated its support towards the Finance Ministry’s action to implement CFS when hiring security guards. In a statement, it wrote:

“Contractors tend to exploit these workers to the max and this causes several issues such as no salary increment, no basic benefits (KWSP, PERKESO, annual leave, medical leave, etc) and sometimes these workers are terminated for no reason by contractors.

The main problem is that there is no guarantee for this job because of this contract system.”

At the end of the day, these are the people you see everyday, guarding buildings and housing areas. They’re even coined as the third line of defence in our country so maybe it’s time they’re treated like one. 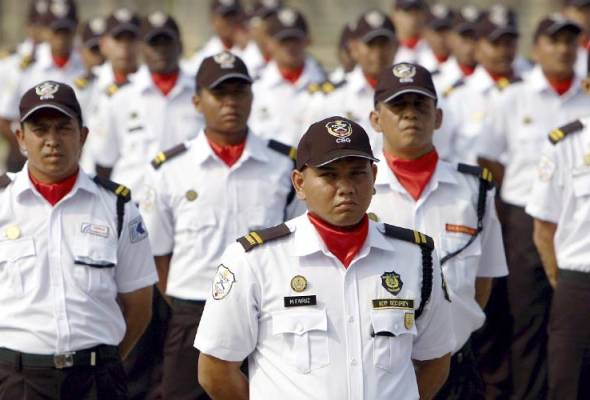