To say that Malaysians love Star Wars might be a bit of an understatement. We have made local tributes to the series, there’s an official registered Star Wars fan club, and you can even take up lightsaber dueling lessons! So imagine how our lightsabers of patriotism became stiff with…um… patriotic energy when we found that there’s a race in the Star Wars universe called Najib! Beyond the movies, Star Wars actually has an expanded universe involving novels and games. Najib is a species that appeared in the Star Wars Adventure Journal and Alien Encounters, a part of what is basically the geekiest thing a Star Wars geek can lay his geeky hands on in the mid-90’s – Star Wars: The Role-Playing Game.

So with the The Force Awakens opening ( Woohoo!!!!) in a couple days, we’d thought we’d  list some interesting things about one of the lesser known characters within a universe far, far away. 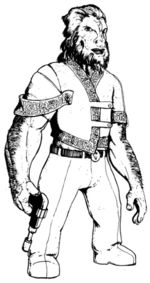 Like this, Image from Wookiepedia. Yes, that’s what it’s called.

Having biological links to monkey-like creatures, a Najib is short with thick arms and legs. The Najib face may also be considered strange-looking by some, with a snout-like nose and hair like a lion’s mane. Another prominent Najib feature is its big mouth, which is filled with dangerously sharp teeth.

It’s also strongly advisable to not mess with a Najib since, while not as tall or known for their strength as Wookies, they are very well-muscled and deceptively strong for their size. Najib also have warrior blood coursing through their veins, with a reputation for being ferocious fighters.

Najib are quite rowdy and will never turn down a good time. Although they can be quite suspicious of strangers, a Najib will be the most loyal friend you can get if they take a liking to you. It’s been noted that nothing angers a Najib more than when a crony is threatened, so he’s kinda like the perfect Chewbacca to your Han Solo. Covered in wetland, electrical discharges, and frequent rainstorms, the Najib home planet of Najiba in the Faj system is considered by many to be completely backward in terms of progress with a high crime rate. However, thanks to the the planet’s unique orbit (how it spins), it is constantly springtime in Najiba.

Najiba is further insulated by an extremely dangerous asteroid belt called the Children of Najiba, which made travel to the planet so dangerous that it was restricted for thousands of years until it was discovered by scouts from the Galactic Republic, kinda like an earlier version of the Galactic Empire in the movies. Even then, they didn’t try establishing contact for several centuries. Although suspicious at first, the Najib opened themselves to outsiders and over time became part of the Galactic Republic.

3. The Najib government is awesome! Probably because they’ve been isolated for so long, the Najib were at a less advanced stage of development compared to the rest of the galaxy, producing very basic goods and services with mining and trade being introduced later. While they had access to hyperspace technology (that allowed spaceships to travel faster than light), they didn’t have the ability to create the equipment themselves.

Before contact, Najiba followed a system of tribal ruling – where individual groups looked after themselves. After exposure to the Republic, the Najib eventually adopted a more unified form of government which banded the individual tribes together to form a “governing tribe”. Each tribe would send an elected official to the governing tribe who would then live and work together with the other representatives to make decisions for the good of the entire species.

Does this mean we’ll see Najib in a Star Wars movie?

Um… probably not. Najib are considered to be non-official in the Star Wars canon. Canon means that it’s official and needs to be accurately represented as the same across all platforms – e.g. Anakin becoming Darth Vader is canon, which means that all materials have to represent this correctly – like, there can’t be a game about Darth Vader where hes revealed to be Han Solo.

So sadly, Najib is a side character, written very much in detail by an obviously hardcore fan/writer. But unlike this epic Malaysian “lightsaber” battle…

… Najib is still recognised as part of the Star Wars universe. Thus its feature on Wookiepedia.

However, different franchises have different ways of defining canon – Star Trek for example defines their canon as “the events that take place within the episodes and movies“. Leland Chee, the guy who decides if things are official or not in the Star Wars Universe. Yes, he’s actually human (and Asian!)

In Star Wars though, the canon tries to incorporate the other parts of the franchise as much as possible with a 30,000-entry database called the Holocron which keeps  track of all the characters, planets, and weapons that take place across the franchise… even if they only show up for a few seconds! The REAL person in charge of this – The Keeper of the Holocron (official job title: Continuity Database Administrator) –  has to make sure that every product, even packaging, that’s officially tied to Star Wars is uniform and fits within the official timeline established by George Lucas. In other words, they have an answer for everything.

“The thing about Star Wars is that there’s one universe … Everyone wants to know stuff, like, where did Mace Windu get that purple lightsaber? We want to establish that there’s one and only one answer.” – Leland Chee, Keeper of the Holocron, as quoted in Wired Magazine.

Oh, and just in case anyone named Najib gets offended by this article, we’re gonna slip in something you’ll see at the end of every movie: