Another couple of weeks, another bunch of headlines and news articles surrounding our politicians and their, um, shocking actions. From the AG-C dropping all charges against Lim Guan Eng to Dr Maszlee Malik’s controversial appointment as IIUM president, journalists around the country are probably having to work overtime everyday just to cover everything. With so much news happening 24/7, you might have missed this headline:

Now, we know what you’re thinking, “wtfbbqptptn is the Great Wall of Kuantan?!” Well, that’s actually pretty much our reaction too when we saw that headline. As it turns out, Mahathir was referring to this: No one show this picture to Trump tenks. Image from Malaysiakini

And as we dug more and more into the story of this mysterious wall, things just get even more weird. From the looks of things, there may be an entire secret Chinese town hidden away behind the walls(?!).

To better understand the issue of the Great Wall of Kuantan, a good place to start is perhaps the area the wall is in the first place.

The wall is in a part of Kuantan called the Malaysia-China Kuantan Industrial Park (MCKIP). Set up in 2013, the MCKIP is Malaysia’s first ever national industrial park.

It’s jointly owned by both nations, with 51% owned by a local consortium called Kuantan Pahang Holding Sdn Bhd, which has Sime Darby, IJM Land and the Pahang state govt as the owners. The rest of MCKIP belongs to the Guangxi Beibu Gulf International Port Group, a company owned by the Guangxi regional govt.

Opened by then-PM Najib and some high ranking Chinese diplomats, the MCKIP was split into three phases. You might be wondering why an industrial park gets opened in Kuantan of all places (no offence #welovekuantan #ihatecilisos), but it actually makes sense, as the Kuantan Port is super near. If you’re going to be producing a lot of stuff to export, might as well reduce the time taken to travel from factory to port right? In fact, Guangxi Beibu even bought 40% of the Kuantan Port just months after opening the MCKIP. 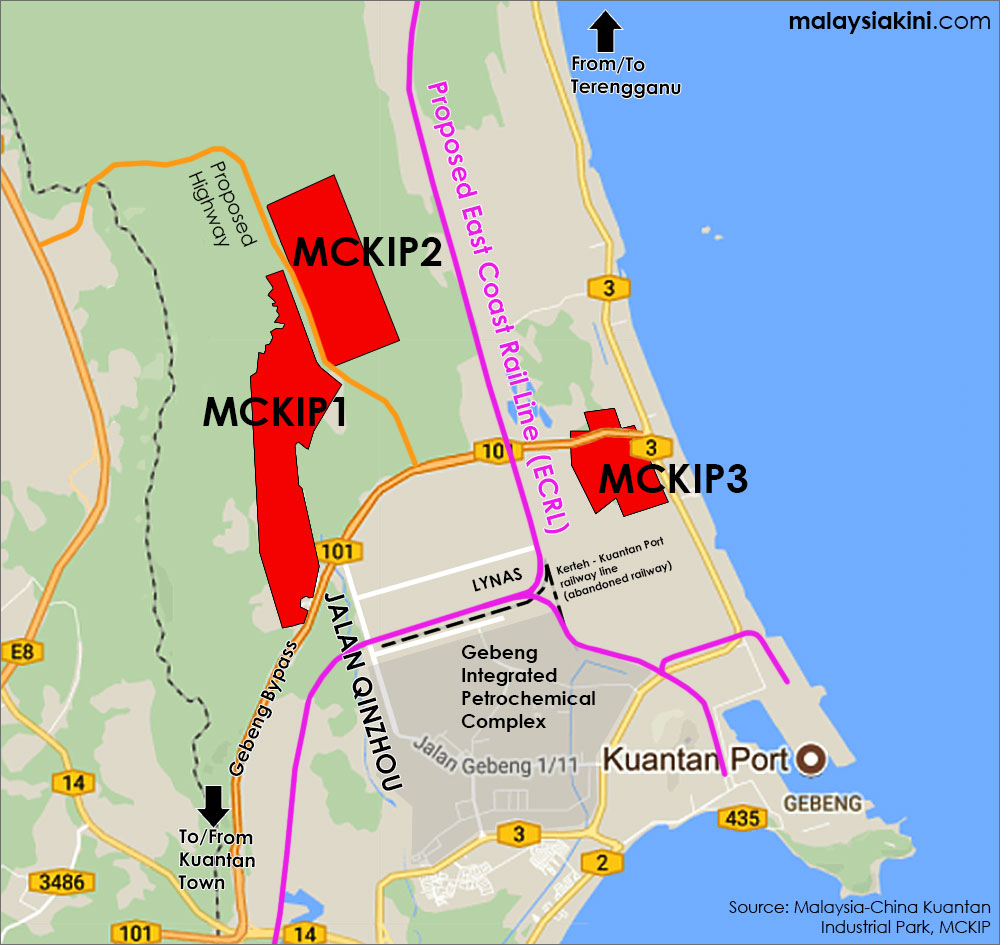 The three phases of the MCKIP and their locations in Kuantan. Image from Malaysiakini

Right now, just phase one is done, and a huge chunk of it is taken up by Alliance Steel’s factory, a steel company partially owned by Guangxi Beibu. A fully operational MCKIP tho is expected to produce 15,000 jobs, RM19.4 billion in investments and open up business opportunities for about 500 local businesses. And while some people did question if it’ll be Malaysians getting the jobs, when Alliance Steel was about to open, locals in Kuantan started spotting some billboards for Alliance Steel, which asks for Malaysians to join. Eh, so that doesn’t actually sound too bad right?

So here’s where the problems start for the MCKIP.  As phase one of the MCKIP was being developed, a wall was also built which surrounded the area. The locals call it Kuantan’s Great Wall of China, and is apparently meant to prevent those inside going outside. There’s only one entrance point too, and it’s pretty heavily guarded by both a local security firm as well as guards from mainland China, adding to the mystery behind MCKIP and its huge wall. According to locals, there’s a secret Chinese town behind those walls.

As for what’s actually inside the walls, from what the Pahang govt stated last year, there were around 3,600 foreign workers and 2,400 local workers inside building the steel mill. However, Malaysiakini found in 2017 that – according to a Chinese national inside the walled area – the number of Chinese workers inside far exceed the figures reported by the Pahang govt, with his estimates being 90% Chinese nationals.

Malaysiakini’s report also says that the Chinese nationals aren’t allowed to leave the walled area, and instead live most of their life in the area. It appears as tho they’ve made a literal ‘Chinatown’ there, with supposedly authentic Chinese food, wine, cigarettes and snacks imported from the mainland. A local chain supermarket inside meanwhile sells just about anything else they need inside. In fact, with how good their lives behind the walls are, the Chinese nationals don’t seem bothered to actually go out.

“It’s just like living in a city in China, if we don’t come out… We are not allowed to come out even when we are on leave. When we are on leave, we will sing karaoke, watch television or play basketball. There is not much entertainment inside the industrial park,” – Zhang, MCKIP worker, as quoted by Malaysiakini With most Chinese cities looking like this, they must really feel at home during haze season. Image from CNN

In light of the news of a Chinese state-owned company running their own version of SimCity in Kuantan, you can perhaps understand the worry behind the MCKIP and its walls. They wouldn’t even let Sim Chon Siang, a state assemblyman, enter the walled complex, instead stopping him outside and MCKIP reps meeting him there. Like, that’s kinda making things preeeeety suspicious. The previous govt didn’t take much action to it tho but with Mahathir in charge now, he’s not happy about the wall and MCKIP.

“An industrial park is not a foreign country….cutting out entry to local officials is not the right thing to do. Nobody has ever done that. You build a wall around an industrial park and you don’t even allow Malaysians to go in. So we need to take down walls and all that because these are wrong in our country,” – Dr Mahathir, as quoted by Malaysiakini

In fact, we even found a video from last year showing Mahathir criticising the MCKIP… in front of the MCKIP. You can see the full video below, but basically, he’s not happy about the supposed loss of our land to foreigners. He also criticises the way MCKIP blocks off foreigners, and holds the then-PM Najib to blame.

NAH, BACA:
5 excuses given by Malaysian politicians that made people more angry

The wall and secret Chinese town isn’t the only issue plaguing the MCKIP tho. There’s been some concerns about the possible pollution and environmental impact the factories in the MCKIP may have on Kuantan. Pahang has already seen terrible pollution occur during the bauxite mining rush a few years ago, and with China not exactly a world leader when it comes to environment conservation, some do have valid reasons to be worried. On top of that, there’s also the curious case of an iron factory in MCKIP that keeps stealing water using illegal piping.

And yet, despite these valid concerns….

The MCKIP is set to stay for now, and might actually be a huge win-win for all

Okay so here’s a plot twist for you: that great wall that everyone’s on about? It doesn’t actually surround the whole MCKIP.

As it turns out, the Great Wall of Kuantan surrounds the Alliance Steel factory only. And, according to Alliance Steel, the wall has uh, absolutely positively nothing to do with keeping Chinese nationals grounded inside their factory complex. Instead, they claim that the major reason behind the wall is to ensure that their super expensive steel factory equipment doesn’t get stolen.

“We really hope it is not demolished because it is important in launching our 24-hour operations every day. It is to protect the property in the factory equipped with machines that run continuously and which are at times, operated without human supervision,” – Steve Hu, Alliance Steel Deputy Commander, as quoted by Free Malaysia Today

With news of Mahathir’s criticisms, the govt began to look into the MCKIP agreement again, with DAP MP Ong Kian Ming helping mediate between Mahathir’s calls to tear down the wall and Alliance Steel’s wish to keep it up. Lo and behold, they reached a middle point – literally. As this writer began writing this story, it was announced that the wall’s height is set to be lowered to 1.8m from its current height of 3m. In fact, Ong Kian Ming pointed out that by keeping Alliance Steel and the MCKIP around and working with them to improve things instead of dismissing them, it could be a big win-win for all parties. He notes that while there was indeed a huge influx Chinese nationals brought in to build the factory last year, now that the steel mill is operational, there’s over 2,500 Malaysians working at the plant, with free meals and lodging too. Ong Kian Ming also highlights that Alliance Steel will be have to regularly report itself to govt agencies to ensure it doesn’t flood the local steel market and threaten domestic steel factories. The Kuantan Port, which is currently underused, is also set to be a lot busier with more industries setting up shop in the MCKIP.

Of course, these are just the possible positive outcomes from the MCKIP. We should perhaps continue to monitor for signs of progress in Kuantan, and ensure that Alliance Steel especially fulfills their side of the deal. But, in the event that the MCKIP does become a success, this could just be the start of a very exciting time for Kuantan and Malaysia too.