Malaysia is a country that’s no stranger to aliens, with CILISOS writing quite a few articles about the aliens who walk among us…. except they’re usually the type that enter the country illegally la. But in this article though, we’re gonna be talking about the space type of aliens because we managed to score an interview with none other than Giorgio A. Tsoukalos!

Sigh. Fine. You all know him as the alien meme guy. Other than being a meme and gracing a number of CILISOS articles (sorry), Giorgio is actually the co-producer and host of Ancient Aliens – a show on The History Channel [Channel 555 & 575 on Astro] about the Ancient Astronaut theory. In a cosmic nutshell, the theory argues that technologically-advanced aliens have been directly involved in guiding early human civilizations, kinda like an extraterrestrial Mary Poppins. These aliens gave our ancestors knowledge and even helped them build structures that survive to this day, such as the Nazca lines in Peru which are supposedly landing strips for UFOs.

We met up with Giorgio at Old Town kopitiam in BU8 and asked him a bunch of stuff about Ancient Astronauts and how he got into this field. And no, we didn’t ask him about the meme. In fact, you won’t even see the meme from this point on because hey, CILISOS might be a cheap clickbaity website, but we aren’t THAT cheap okay! 😛 We didnt even do the pose!

That’s also because we figured everyone else who interviewed him would have asked him about it (it’s on his Reddit AMA anyway), or at least asked him to do that infamous pose 😀 . Anyway, without going around in cropcircles, let’s head straight into some of the things we’ve learnt from Giorgio: 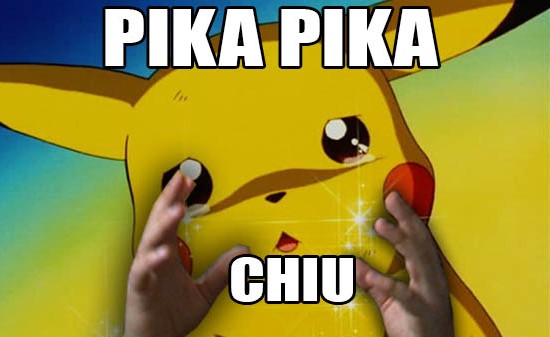 Aaaaaaaactually there have been accounts of UFOs or extraterrestrial activity reportedly seen in Malaysia, but they’re really few and far in between. You can check out our article about these sightings here, but suffice to say Mulder and Scully won’t be able to cari makan here la.

We thought it was because UFOs couldn’t see Malaysia from space or some other scientific explanation, but Giorgio’s response kinda caught us by surprise:

I think that in this day and age, people have simply forgotten to look up into the sky. Everybody has their face buried in their phones. While this may seem as a very simple answer I think it’s part of it. And I think that there are as many mysteries here as the rest of the world but people are simply not paying attention. – Giorgio Tsoukalos, in interview with CILISOS

While you’d think that having smartphones would make filming this sorta stuff easier, Giorgio says it isn’t the case. The problem now is that we’re at this technological stage where you’d have to wonder if the footage is of aliens or some high-tech manmade object.

But in any case, he says that he isn’t too familiar with modern sightings – his specialty is in Ancient stuff, and in that regard, Southeast Asia is a hotbed of myths that might be proof that aliens may have stepped foot on our shores; which brings us to something meatier…

2. Our ancestors thought aliens were gods because they couldn’t brain technology Doesn’t this Mayan carving look like a man in a rocket ship?

Giorgio thinks that many myths and early religions stem from our early ancestors trying to explain the technology that the aliens were using. It’s not because they were stupid, but they had no reference to what it was (imagine showing an iPad to an ancient Egyptian) so they took the only reference they had – nature. This is how you get stories of dragons – which appear all over the world:

“We have to ask ourselves if stories of  dragons were real, and if so, were they actual living beings, or misunderstood technology because dragons are always described as having descended from the sky with a trail of smoke…. That to me is more a description of a machine and not necessarily a mythological being.” – Giorgio Tsoukalos

This might have also been the basis for many ancient religions like in Greece, where the gods would descend from the sky and interact with humans; or in Mayan carvings of “space shuttles”.

Yes, it’s a pretty wild theory and we’re sure many of ugaiz are rolling your eyes back so far right now that you look like a Thai horror movie character. But what if we told you that something like this happened as late as the 1940s? During World War 2, the Allied forces set up bases on Pacific Islands. These Islanders had never seen stuff like medicine or even canned food, which were airdropped from planes. Years later, when the soldiers were long gone, anthropologists found that the locals had started religions called “Cargo Cults” where they built wooden “control towers” and had rituals that looked like military marches so that the gods would drop food and medicine from the sky.

So in a way, you could say that these arguments may not be completely…. baseless. If you look through alien encounter stories, you’d notice that most of them are described as being human-like in appearance. The reason for this, according to Giorgio, is because we’re technically their descendants through the process of panspermia – spreading “seeds” of life through the universe to see where it would grow.

But if aliens were so helpful to our ancestors, why did they suddenly stop?

Well, it was because we’ve gotten advanced to the point where we would recognize them as aliens rather than gods, and with that comes the danger of us trying to shoot them down or capture them. However, Giorgio believes they’re still around – perhaps watching us from afar like Asian helicopter parents:

“I don’t think the Extraterrestrials ever left. They’ve always observed us since we’re their offsprings, so they wouldn’t abandon this development because they’re curious to see where we’re taking this world.” – Giorgio Tsoukalos.

4. He really doesn’t care if you believe him or not So there are two things that you may not know about Giorgio – for one, he didn’t come up with the theory of Ancient Astronauts – it was actually popularized in a book called Chariots of the Gods? written by Erich von Däniken, who’s also his close friend, mentor and co-publisher of Ancient Astronaut magazine Legendary Times. 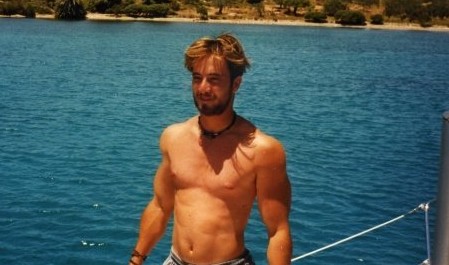 Thats him! Image from Bodybuilding Forum.

And second, he used to be a bodybuilding promoter, something that helps him quite a bit in his current job:

“I used to be a bodybuilding promoter – emphasis on promoter – so I used to talk about fitness and the benefits of a healthy lifestyle. And now I’m promoting the idea of extraterrestial life.” – Giorgio Tsoukalos.

While he’s pretty okay with being a meme, he did tell us that it also helped spread statements that he’s never made:

He even has a disclaimer on his site!

Instead, Giorgio says that neither he nor (most of) the Ancient Astronaut community have claimed their theory as fact. Instead, what they do is raise questions:

People get offended because we say this and that, but no, what we’re doing is asking questions. To me, that’s the scientific nature of all of this … And that’s what the show Ancient Aliens does. We ask questions. The narration is never a period at the end of a sentence. It’s always a question mark, never a definitive answer. – Giorgio Tsoukalos.

And even if you think the theory is complete bunk, he doesn’t give a flying saucer anymore:

“Twenty years ago, statements like that would make me upset and I would start to argue or get into verbal fights with the skeptics, but today I really don’t care anymore because you’re either ready for these theories and ideas or you’re not. And we all know if you don’t wanna accept something you’re never gonna accept it even if the evidence is thrown on your lap.” – Giorgio Tsoukalos

But what if you do? What if you think that aliens may have once set foot on our Malaysian shores? Well, here’s the good news… Unfortunately, Giorgio hasn’t spent enough time in Malaysia to give us specific examples, but he did say that he would come back to look for more evidence based on some interesting things he’d seen at our national museum and a picture of a rock carving that another interviewer showed him.

However, he did have a theory about Singapore’s Merlion – a half lion, half fish being:

“I read that in the 13th century, the Merlion rescued a whole bunch of people from the ocean. The moment that I heard that a half lion-half fish rescued people I’m like, what are they talking about, man? Because in my opinion [it could be] some type of a vessel – a submarine or something because stories of a mythical being rescuing people, they’re not just in Singapore – they’re worldwide!” – Giorgio Tsoukalos, in interview with CILISOS

In any case, we do know that there are Malaysians like this writer who are interested in Ufology (yes, it’s an actual field!) so if you’re planning to look into Ancient Astronauts in Malaysia, Giorgio has some advice to get you started:

“I would suggest immediately starting with the national library. Go over there and scour all the old books, because while the internet is a great resource, there are libraries all around the world with unscanned books that may [contain evidence]” – Giorgio Tsoukalos.

But here’s our question: If Giorgio and his team of researchers come back to Malaysia, where do you think is the first place he should go to?

Oh, and we should also note that Giorgio and his wife found the food at Old Town (totes a CILISOS advertiser)…. out of this world.

P.S.: This article is kinda like a basic intro to the world of Ancient Astronauts, but we do have some extra bits like what Giorgio thinks of Lizard People, which we don’t have… space for. Let us know if you wanna read it, and we’ll post it in the comments 😉