With the prices of food increasing year on year, more supermarkets are advertising cheap prices in order to appeal to the Malaysian grocery shoppers and beat out the competition. Cabbages are going for RM5.29 a kilo, tomatoes at RM4 a kilo… heck, you could barely feel the pinch buying them! Tomatoes for RM3.99/kg. Eat until you sien lor…

But still, even though it seems like they’re super cheap, you’ll be shocked to know how much they ACTUALLY cost when they come direct from farmers. Let’s take for example a big azz bag of 20KG TOMATOES. How much d’ya think it would cost?

Ready for the answer? Well it’s…

That’s right. Farmers are selling them at dirt cheap prices to wholesale middle-men distributors, who then sell them to supermarkets. But… why so low? Can they even earn ANYTHING at that price? Geez! We had the opportunity to speak to two farmers, Tang, and Loh, who ply their trade in Cameron Highlands, and what we learned from them is that….

They don’t get to decide the price of their vegetables…

According to Loh, the price of their vegetables are decided simply by how much the middleman/distributor is willing to pay them for it, and these prices can change drastically. On a GOOD day, they can sell 1kg of cabbage at RM0.90. On a BAD day, they sell it at RM0.30. That’s a difference of 200% wei! That’s like you buying a teh tarik from the local mamak at RM 1.20 today, and going back next week to find it at RM3.60.

And then Tang shares a really harrowing story with us…  Once, a distributor offered to buy 20kg of her tomatoes at only RM0.40. On top of that, she has to fork out money for packaging which costs RM0.30 per box. So if you put two and two together, each kilo of tomatoes will earn her only RM0.005!

Which means, in order to earn RM1, she has to SELL AT LEAST 200kg of tomatoes!

And since vegetables in general are extremely perishable goods, she had only two options: sell them at a sad price, or watch the entire batch go rotten… which happens more often than you think. Sometimes, the prices that are offered by the middlemen aren’t even high enough to cover the cost of packaging. As mentioned earlier, the price of a 20kg cardboard box is RM0.30, and the price of a styrofoam box that’s used to package more temperature-sensitive vegetables like watercress is actually RM2.50 per box. At those prices, sometimes the vegetables aren’t even worth selling. As Loh tells us:

“Sometimes they offer us so little that we rather just give it away to anyone willing to come and take it from us. Most of the time though, we actually lose less by just throwing them off the hill or digging a hole and burying them. Donating them to others is only possible if they are willing to provide the boxes and take it for themselves. We can’t afford to package it and send it to them.”

And with Malaysia at risk of a food shortage, it is shocking to learn that all this perfectly edible food is being wasted simply because of a faulty system of business and food distribution.

Why not just change middleman (or sell direct) then?

Firstly, it is unlikely that changing a middleman will lead to better prices, since most middlemen operate as a group and follow the same prices (like a cartel monopoly), exploiting the farmers together (of course, there are some who are genuinely trying to help the farmers). Plus, some of these middlemen do more than just help the farmers ship goods, but actually offer them other things like financial services, which makes the farmers dependent on them.

NAH, BACA:
Did Najib make everyting in Sabah and Sarawak cheaper by abolishing this one thing?

And actually, our gomen has been trying to help them with special initiatives too.

The ‘Pertanian Adalah Perniagaan‘ campaign wanted to get more of ugaiz to take up farming, and to create a platform for farmers to directly sell their stuff to anyone in a pasar tani. Although it didn’t really solve the middlemen issue, so the ministry then came up with this omgwtfbbqptptn-sounding campaign called ‘Jihad Menentang Orang Tengah’ (JMOT). Yea it sounds scary la, but the whole aim is to reduce the influence and power of middlemen and help farmers and fishermen get more value for their products. 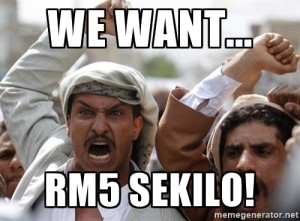 But of course, not everyone is happy with it. Business owners and middlemen were pissed cause they felt it would affect the food distribution chain, causing their businesses to suffer from higher prices. Plus, removing the middlemen may affect farmers too – they may not survive without each other!

So… it looks like the answer to helping farmers earn more isn’t as straightforward as just removing one party after all. Especially since how much they earn are also dependent on skills that you probably wouldn’t think a farmer needs, which is why…

Farmers are more like stockbrokers! (But the really lesser-paid ones lor..) Aside from middlemen meddling around with prices, how much farmers earn also depend on them being able to predict the future. Think of factors like the seasons (some veggies sell better in hot seasons), religious and cultural festivities (e.g. Ramadan, CNY) and food trends (e.g. whatever that’s trending in Publika aka Hipster Central). Basically, everything needs to be timed reeeally carefully.

“If my vegetables mature during the puasa period, I can’t sell them for a good price. If they mature right after Ramadhan puasa, suddenly the prices go up because the demand is a lot higher then. So the timing has to be perfect. Too soon or too late, and the prices will fall.” – Loh to CILISOS

In addition to that, they also regularly change the crops that they plant in order to meet market demand and food trends, like planting more fruits in response to the trend of cold-pressed juices in Malaysia.

Predicting market trends? Changing portfolios? Time-sensitive trading? Woah. They sound less like farmers, and more like Wall-Street financial experts! Who knew farming needed so much more expertise besides just knowing the difference between sawi and kubis, right? So it’s really unfortunate that they don’t make as much money as their effort deserves.

Well, it’s mainly because there’s a massive problem in the system where farmers are not properly supported when distributing goods. Senang kena exploited lor, especially when they have bigger and stronger parties to depend on.

As stated earlier, this also leads to a huge amount of food wastage when they rather throw away their produce than sell them at an even bigger loss. 🙁

Until we fix this issue, farmers will keep earning less, and we will keep having to pay more. And with so much food being wasted, the environment also loses out.  Maybe we can consider buying more from pasar tanis, or demanding that our major grocery chains guarantee that their veggies are responsibly bought from farmers at fair prices. So…field trip to a farm anytime soon? Anyone? 🙂