In less than a year, Malaysia will be holding its 14th General Elections! It’s expected to be held on or before 24 August 2018. It seems like not so long ago we were scrubbing our blue fingers to see if the so-called indelible ink was really indelible or not (P/S, it wasn’t!). This writer’s finger after GE13

Anyways, with every election, Bersih is not far away. Their name has become synonymous with trying to fix everything wrong with elections in this country. Since forming in 2006, the yellow shirt rallies have been organised four times, over two general elections. Now they’ve contacted CILISOS to talk about their new initiative, Global Bersih. Chup………..Bersih is going global?!?

Technically Bersih has already gone global as we saw overseas Malaysians rallying in solidarity with Malaysians here. Rallies were held in 74 cities around the world – London, Melbourne, New York, Dubai, Jakarta, Tokyo and so on – and 18,000 overseas Malaysians attended! But, this time Global Bersih (GB) is not just a about gathering people at rallies any more…

Global Bersih wants to enable Malaysians to vote from overseas! How ’bout that? Original image from thedigitaltrekker.com

WOWWW, we can do that?! Yup, if you didn’t know before, Malaysians can now vote even if they’re living overseas, a decision made by the Elections Commission (EC) just in time for GE13 in 2013. Overseas Voting is part of Postal Voting (though Postal Voting IS NOT Overseas Voting. Think of it this way – an apple is a fruit, but not all fruits are apples).

Previously, postal voting was restricted to only military personnel, civil servants, and full-time students studying abroad and their suami-isteri. How does postal voting work? First you must register as a voter online at the EC’s website. They will have ‘Form A’ and ‘Form B’, pick the one that applies to you. BUT to be eligible, you must come back to Malaysia for a total of 30 days (not necessarily consecutively) in the past five years. Unfortunately, those who live in Thailand, Singapore, Brunei and Indonesia are not eligible coz they are expected to fly back instead if they wanna vote.

Essentially, Overseas Voting is voting at the Malaysian mission. Postal Voting on the other hand, means the voting ballot papers are delivered to an address, which may or may not be a Malaysian mission, outside of Malaysia (or outside Sarawak but inside Malaysia in the case of the 2016 Sarawak state elections). The voting ballot papers are then returned, not in the diplomatic mail bag, but via “normal” (in practice courier) post.

*We got some of info from one of our readers who drove 12 hours to the Malaysian High Comm to vote in the GE2013, a Sarawakian who received his 2016 Sarawak state election ballot papers in the post at the comfort of his (rented) home, and a poor suffering soul who has sat through four Federal and three state elections in Oz. Guy putting his envelope in an overseas postal voting bag. Image from newmandala.org

Actually, our close Southeast Asian neighbours Indonesia, the Philippines and Bangladesh have postal voting. Singapore and Thailand on the other hand don’t, but their overseas citizens can still vote in selected locations, usually an embassy in that country. Other countries that allow postal voting are Switzerland, the UK, the US and more. In fact, three states in the US now conduct all elections by mail, and some states even offer drive-thru voting (like ordering McD!).

Ehh actually sending votes by post SAFE or not?

While we salute Global Bersih for this effort, we should point out there are some concerns about postal voting. It has always been accepted that postal voting is not secure, according to Michael Meadowcroft (British politician and public affairs consultant). It’s more vulnerable to fraud and vote-rigging. That is the reason France abolished postal voting in the 1970s.

What if something happens to precious ballot papers in the super special postal bag overseas? Or while it’s on the plane on the way back to Malaysia? Anything could happen in between. Nurul Izzah also questioned the credibility of postal voting, claiming that BN will fix several seats like “fixed deposits” for them. 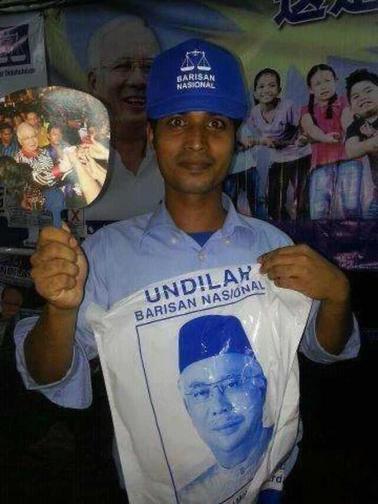 Photos like these surfaced, claiming that Bangladeshis were voting alongside Malaysians. This is unverified. Image from CNN

“In the 2013 General Elections, BN won a total 133 out of 222 parliamentary seats. However, the victory for 30 of those seats were secured only through the votes cast by the postal and early voters.” – Nurul Izzah, PKR Vice President, The Sun Daily

So, voting at a designated polling station is arguably more secure and secret. Not that voting at polling stations are always 100% fair, especially with stories of blackouts and phantom voters, etc. during GE13 (though these are just considered allegations because there was no investigation).

At the same time, one of the benefits of postal voting is it might increase voter turnout. But the MAIN thing is Global Bersih wants to fight for Malaysians’ right to vote. Whatever method is employed, it boils down to our RIGHT TO VOTE, as provided for in the highest law in our country – the Constitution.

It was a long road for overseas Malaysians… once upon a time in 2012, the High Court rejected an attempt by six Malaysians living in the UK to obtain voting rights after the Election Commission refused to let them register. The six, who formed the My Overseas Vote group, filed a suit saying they were being discriminated against, though the court described their bid as “ludicrous”. In the end, they won the battle for all overseas Malaysians when they were finally allowed to vote by post in GE13. Some people more gung-ho… they will fly back just to vote! Photo from Global Bersih

Global Bersih has been contacting Malaysian embassies around the world, and none of them has been able to assure them that Overseas Voting will be implemented for GE14 this time. SO, they need help from the community of overseas Malaysians. What if you’re Malaysian living IN Malaysia? Yes, you can help too!

You can also help by:

Global Bersih’s activities are carried out with the help volunteers who coordinate with someone based in KL. What they do to keep overseas Malaysians informed and connected to our tanah air, plus, they train them on how to register, what the overseas voting procedure is like, understanding their rights, and so on. To prepare for GE14, they’ll need extra hands, so they need to raise RM150,000 a year to pay staff to do all that work. Here’s how your contribution will be spent: There are other ways to contribute to them if not money, for instance your time and expertise maybe? You can email [email protected] for that.

If you’re reading this thinking that you don’t care much about stuff like this, well, there are people who are doing all they can for Malaysians to ensure everyone’s vote counts and NOBODY gets sidelined.

Overseas Malaysians may not physically here, but they are with us in spirit.