Lemang is, like, THE ultimate raya food. Yeah, we know, usually people use ketupats in commercials and logos, but as anyone who’s ever been to a raya open house before will tell you, you should get the lemang first. The ketupats will still be there an hour later.

The familiar form of lemang is some glutinous rice stuffed inside a banana-leaf-lined bamboo section with some water and coconut milk, and burned over an open fire. Like so: No, they’re not roasting a fence. Source

Making a lemang is a bit more labor-intensive than ketupat, so it’s no wonder that you feel a bit more special when eating it. Speaking of special, have you seen one made of pitcher plants? If you haven’t, feast your eyes! 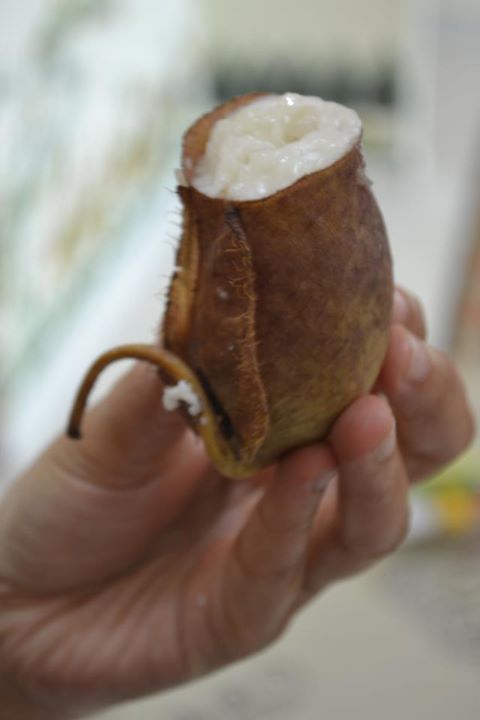 So. Cute. Must. Nom nom nom it. Source

It started gaining popularity sometime during the last year, but people in East Malaysia had been cooking their rice in pitcher plants for longer than that. Now, fans of Upin & Ipin might have remembered an episode where they featured this particular type of lemang back in 2013. However, the episode was copyrighted, so we can’t really show it here.

The pitcher plant lemang, or lemang periuk kera in Malay, is a seasonal thing. It is only sold in Ramadhan bazaars and you can only find it in a few open houses, so a lot of people haven’t actually encountered one in real life or even know about it. When seeing it for the first time, some doubts may surface. Doubts like… In Pokemon, the pitcher plant eats YOU. Source

Just to clarify, something is poisonous if you bite it then you get sick, it’s venomous if it bites you and you get sick. The pitcher plant is one of the few carnivorous plants, meaning that unlike normal plants that are content to suck out nutrients from dirt, they get their nourishment from small animals and insects. This brings about the misconception that they are poisonous or venomous in some way. 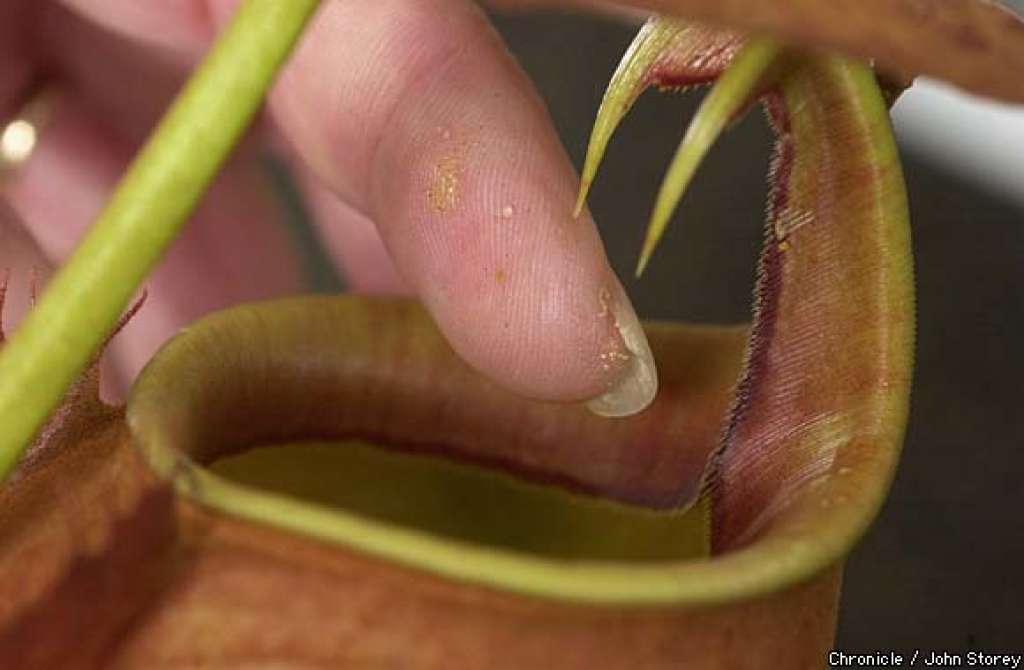 Some of them have fangs, but they probably don’t bite. Source

While they do survive on insects, unlike the more active Venus Flytraps that snap shut when an insect lands on it, pitcher plants don’t really bite. What they do is secrete some nectar to attract insects, and kinda hope that an insect or two falls into the pitcher to be digested. The lip of the pitcher as well as the insides are slippery to avoid insects from crawling back out, and some species have barbs or aldehyde crystals to keep them in. They are completely passive, so they’re not at all venomous.

The pitcher is filled with a kind of fluid to digest insects, and this fluid is apparently so sterile that one source claimed that the Orang Asli uses it to wash their eyes whenever they get eye infections. That is, when the pitchers are newly formed, of course. Once an insect falls in, the liquid turns slightly acidic to digest the insect. But not all pitcher plants eat insects. Some species feed on squirrel poop and some on fallen leaves, among other things. From left to right, the swamp, flask and slender pitcher plants. From Wikimedia Commons.

NAH, BACA:
These Malaysian researchers came up with a coconut-based armor, and it actually works

While lemang made from swamp and slender pitcher plants can be eaten along with the plant itself, the flask pitcher plant aren’t as easy to eat: one source reported it to have the consistency of cardboard, and only serves as a wrapper to the lemang. However, their flask-like shape makes it ideal for holding rice, and it peels off the cooked rice easily. The swamp pitchers, on the other hand, were reported to be more pliable and easier to chew.

Making them is easy, if you have pitcher plants at hand. 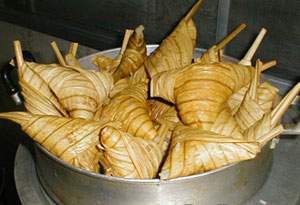 One huge difference between lemangs made from pitchers and the one from bamboos is that you don’t burn these on an open fire. Instead of roasting them, these lemangs are steamed, which brings about a quandary as normally you’d call a steamed mass of glutinous rice in a wrapper a ketupat instead of a lemang, but hey. It’s not like there’s a convention for naming these things.

Even though it sounds like an exotic recipe, making one is really simple. The only exotic ingredient in the whole mix is a pitcher plant, and they aren’t sold in most markets. You can obtain them from suppliers, or go into the jungle yourself to get them. They are reported to flourish in swampy forests near lakes, and apparently there’s no danger of over-harvesting pitcher plants just yet.

“I literally could not take a single step without crunching the pitchers below my feet – that is how well they carpeted the forest floor.” – Dr Rachel Schwallier, for BBC Travel.

These pitchers will then be cleaned thoroughly, rinsing them out well to remove any half-digested insects or leftover digestive fluid, and the pitcher’s lip and lid can be removed if you want to. The swamp pitcher, according to a recipe blog, does not need to have its lip removed and is only cleaned thoroughly with a brush like so:

Glutinous rice, coconut milk, salt and sugar are then inserted into the cleaned pitchers like any other pulut-based dish and steamed for about an hour. The pitcher plant will shrink and turn a different color, but that’s normal. According to a source, this releases the nutrients and flavor of the pitcher plant into the rice within. Like regular lemang, they are eaten with rendang or simply with just sugar or condensed milk.

And people really liked the concept! A steaming tray half full of pitcher lemang. Source

Stories from entrepreneurs who decided to sell these pitcher lemangs are mostly success stories. A stall owner had quoted that he could sell up to 200 of the lemang each day, at RM1 to RM4 apiece. As to why people went crazy over it, he had offered:

“People like this pitcher plant lemang because it is creamier compared to the bamboo lemang,” – Rahman, pitcher lemang seller, for The Star.

“My friend told me that the people in Sabah cooked rice in pitcher plant leaves. That inspired me to try to cook glutinous rice in it. I tried nearly 10 times before I discovered the appropriate technique and recipe for making lemang periuk kera,” – Noorshafry, for MyNewsHub.

There are a lot of opinions on how they tasted, from not very different from regular lemang to more aromatic, tastier and creamier than regular lemang, but the thing about food is that you have to taste it yourself to know for sure what they taste like. So with Ramadan around the corner (end of May), you can try going to an evening bazaar if you’re interested. If you’re lucky, maybe you’ll find a stall selling them.